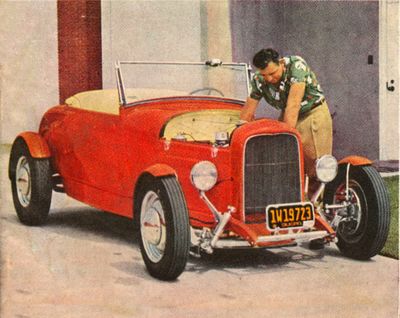 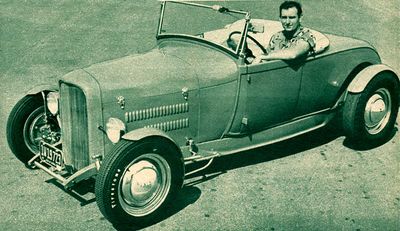 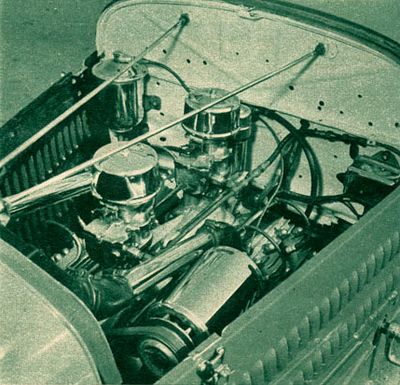 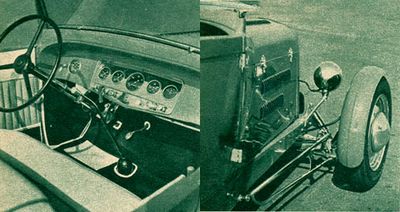 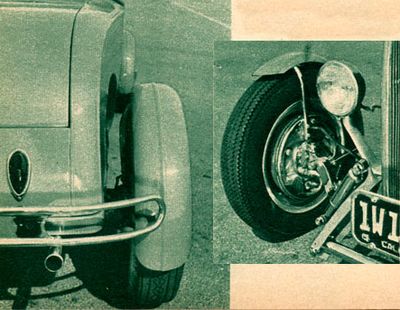 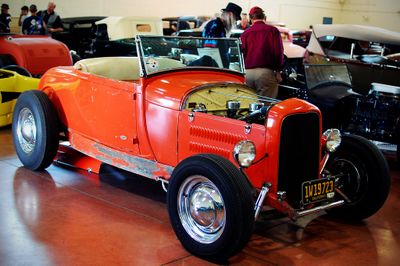 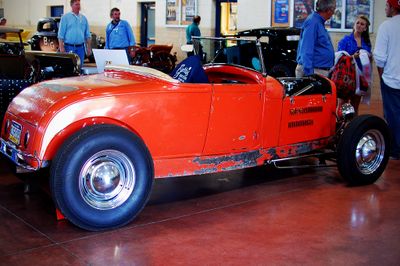 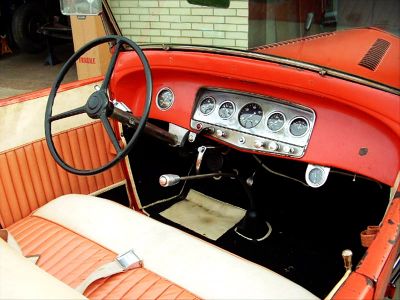 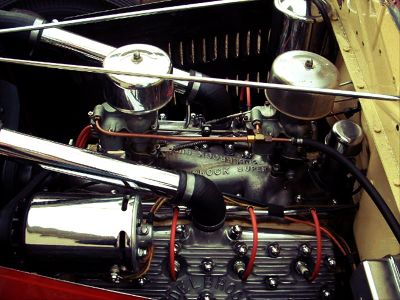 1929 Ford Roadster built by Jack McDermott in 1950. The 1929 Ford body was mounted on a set of 1932 Ford rails which was Z'd i the rear to lower the car, up front the axle was dropped and filled. The fenders were made from Buick spare tire covers, the fender brackets were made from ordinary electrical conduit, reinforced with iron bolts. The steering system originated from a 1935 Willys, which was much more smoother than the stock unit. The deck lid was filled, the door handles were removed and the hood latches were standard trunk buckles bought from a hardware store. Both hood sides were fit with 20 louvers each sides, costing 10c per punch. The rear end was modified by installing 1939 Ford teardrop taillights and by installing a MG bumper. Jack had Barris Kustoms to paint the car once the bodywork was completed. The car had split wishbones, chromed shocks and headlights. A 1932 Ford grille was installed, giving extra cooling to the warmed over flathead which once sat in a hot bellytank, the double century mark. The 1946 Mercury 268-cui flathead once ran 151 mph at the dry lakes in 1949. The engine featured a 1/8 bore, Clay Smith 262 cam, Potvin ignition, Edelbrock heads and dual manifold. A lot of the components in the engine compartment were chrome plated, making the engine pretty neath. The interior was reupholstered by Bill Gaylord of Gaylord's Kustom Shop, Jack also fit roadster with an adjustable 1930 Ford windshield. An Auburn dashboard was installed and reversed, giving it a recessed effect. Jack used solid 16 inch wheels, with Firestone motorcycle tires up front and standard Firestone 7.00-16 tires and the rear, which were found suitable with 3.78 rear end gears.[1]

The car was sold to Elwood "Woody" Brougher of Pittsburgh, Pennsylvania in 1954 or 1955 for a total cost of $ 900. Woody owned a speedshop in Pittsburgh and made winter trips to California to buy speed parts for his shop and his racecars which he raced at the local dirt-track. The car was towed to Pennsylvania, and would never hit the road until it's recent restoration. the flathead was sold and a Chevrolet V8 was installed, which evebntually got sold as well. As the time passed by, Gary Brougher, Woody's grandson inherited the car. Gary sold the car to Bill Ruffner of Delmont, Pennsylvania on October 2 2004. By the time of the purchase, the car was missing its engine, radiator, wheels and a few other miscellanceos parts. However, Jack's old roadster is still around, Bill decided to restore it back to how it appeared on the cover of Hot Rod Magazine December 1953.[2]

Please get in touch with us at mail@kustomrama.com if you have additional information or photos to share about Jack McDermott's 1929 Ford.