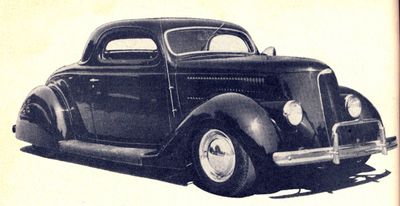 1936 Ford 3W Coupe built by Jack Calori and Herb Reneau. Jack bought the car from its original owner in 1947 to use as a tow car for his 1929 Ford Roadster 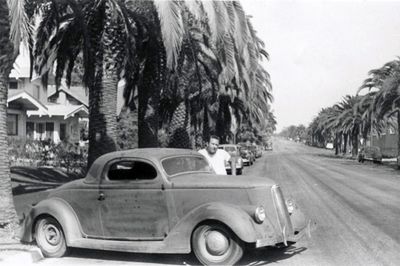 An under-construction photo of Jack's coupe. Photo courtesy of The Rodder's Journal. 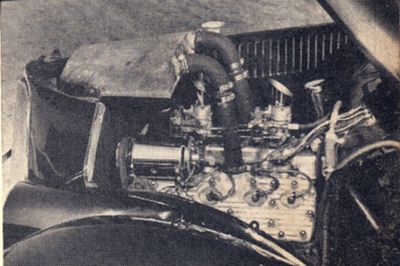 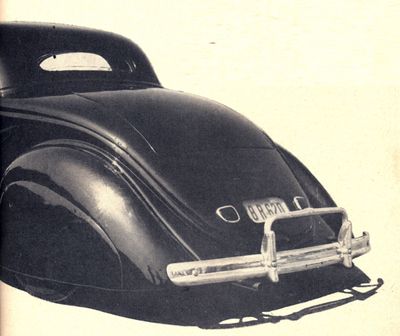 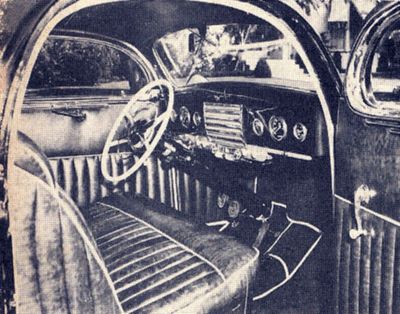 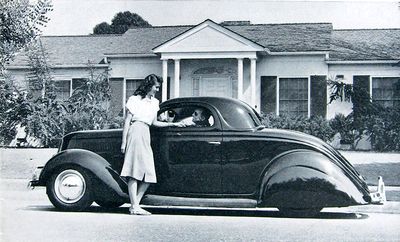 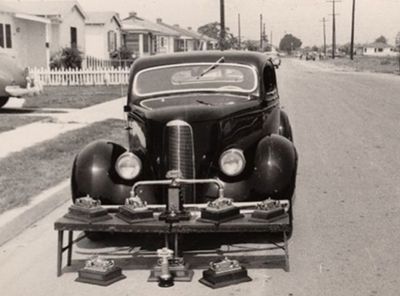 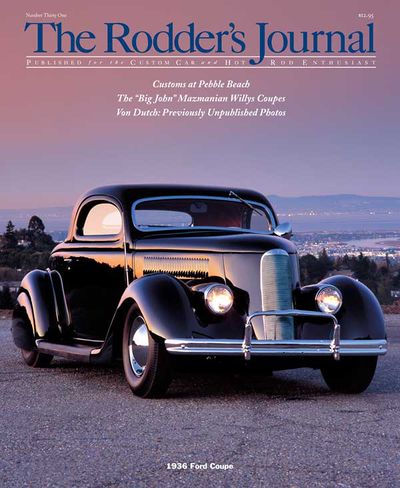 The restored version of the Calori Coupe was featured on the cover of The Rodder's Journal 31. 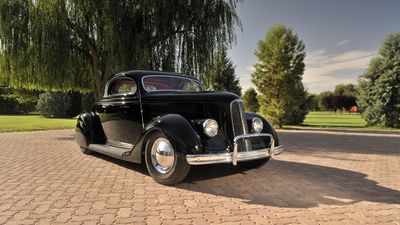 The Calori Coupe as it appeared when it was advertised for sale by Mecum Auctions in 2012. The car was one of the main attractions at the auction. Photo courtesy of Mecum Auctions. 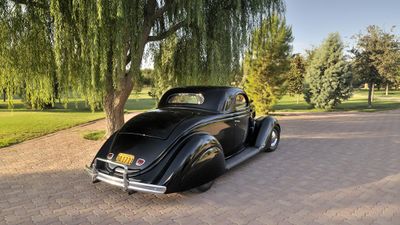 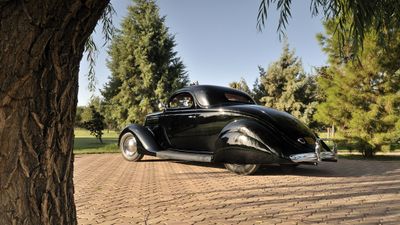 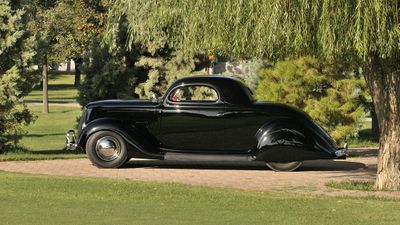 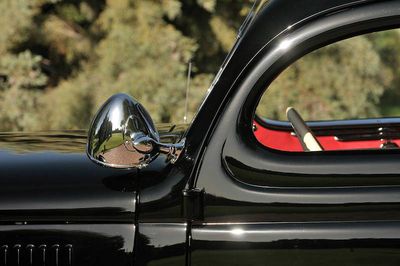 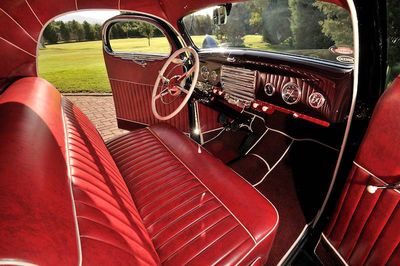 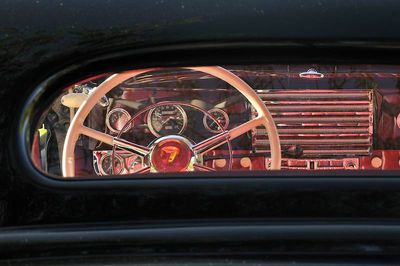 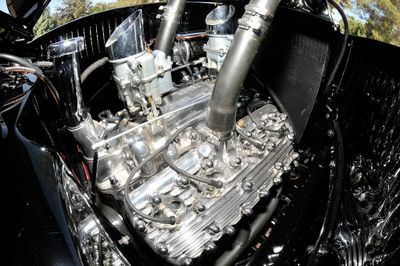 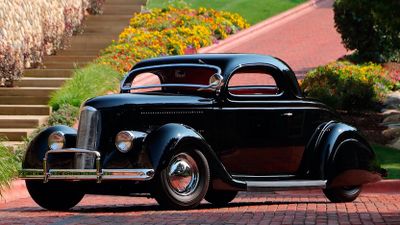 The Calori Coupe as it appeared when it was advertised for sale at the 2018 Mecum Monterey auction. The car was sold August 25, 2018 for $407,000 USD. Photo courtesy of Mecum Auctions. 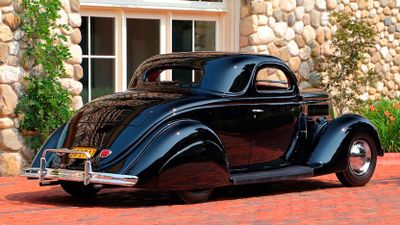 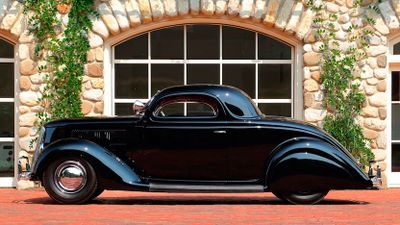 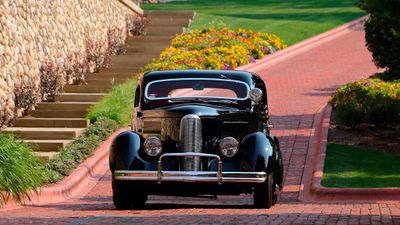 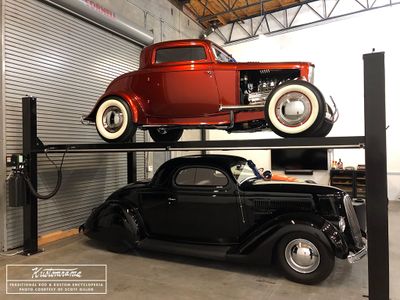 A photo of the Calori Coupe and Lloyd Bakan's 1932 Ford 3-Window Coupe taken in 2020. Photo courtesy of Scott Gillen.

1936 Ford 3W Coupe built by Jack Calori and Herb Reneau. Jack bought the car from its original owner in 1947 to use as a tow car for his 1929 Ford Roadster. Jack had the car stored in Herb's garage and without much prior discussion, Herb cut the top off the car. Jack liked the idea and he and Herb continued to restyle the car. To get the right stance, a four inch ride height, Jack Z'd the rear of the frame and installed a dropped axle in front while Herb finished the 3 inch top chop. In addition they modified the car with a 1939 LaSalle grille, a clamshell hood, Buick teardrop skirts and molded 1940 Chevrolet headlights. The hood was lengthened three inches, and the side panels were louvered. The stock bumpers were replaced by bumpers from a 1941 Ford. At the rear the license plate was recessed into the deck lid, and 1941 Hudson taillights were installed. Herb did all the bodywork on Jacks coupe. The build was completed in 1948.

Inside, the upholstery door panels and top were finished in dark red leatherette with ivory trim and numerous fittings were chromed. A unique feature of interior was a chrome tray which pulled out from right dash panel

When Jack sold his 1929 Ford roadster, he kept the engine, a 59AB from a 1946 Mercury, and installed it in the coupe. The engine was bored and stroked 1/8 inch each way. It was equipped with a Clay Smith cam, a Lincoln distributor, Eddie Meyer heads, and a Weiand intake and Potvin ignition. The oil pan, dipstick tube, water pumps, generator case, and oil filler/breather were all chromed, and the heads and intake were polished. Jack tested the Coupe with the new engine in a Rusetta Timing Association run, and he clocked the car at 114.50 mph in 1948. It was a hot engine, both in performance and temperature. The was no room for a fan and the grille limited airflow. Several methods were tried to improve cooling (louvers, air scoop under the bumper and a larger water tank) but none ever solved the overheating problem.

Tired of overheating problems, Jack traded the coupe in on a brand-new 1950 Mercury. The car went from Lynwood to Minnesota.

By 1957 the old custom had found its way to Spokane, Washington where it was owned by Draggins Auto Club of Spokane member Bill Bongers. Bongers replaced the flathead motor with a fuel-injected Chevy engine. Fellow Draggins member Buddy Brennan bought the car, minus the fuel-injected engine, from Bongers around 1957. By then, the coupe had been dressed up with whitewall tires and lake pipes.[1]

Roger Domini found the old custom in Spokane, Washington in the early 1990s. Roger sold it to Don Orosco.[2] In 2002 Don sold the car to Jorge Zaragoza of El Paso, Texas. Jorge had Roy Brizio Street Rods restore it. The paint was done by Darryl Hollenbeck at Vintage Color Studio in Concord, California.

The restoration of the coupe was completed in 2005, in time for the 2005 Pebble Beach Concours d'Elegance. At the show, it won best in class in the first Early Custom Cars 1935-1948 Class. It also won the Dean Bachelor Award at the same show. Brizio and Calori where at the shop accepting the prestigious prizes.

In November of 2012 the Calori Coupe was sold by Mecum Auctions at their Anaheim auction. The car was one of the main attractions at the auction.[2]

Please get in touch with us at mail@kustomrama.com if you have additional information or photos to share about Jack Calori's 1936 Ford.