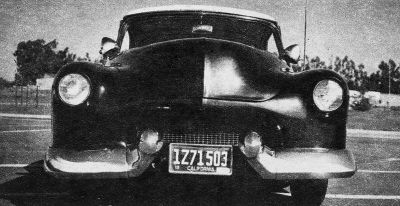 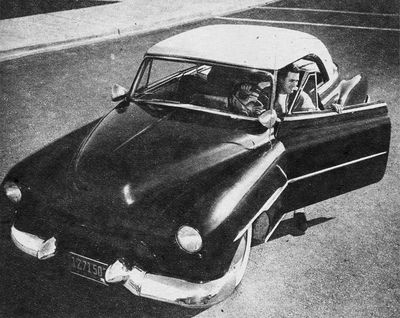 1951 Chevrolet Bel Air restyled by Valley Custom for Howard Clarkson of Santa Paula, California that he purchased brand new. The front fenders were extended 2 inches and the headlights were frenched and fitted with 1952 Mercury rings. The hood was shaved and the corners were rounded. A peak was also added to the hood which extended into the grille shell. The shell was molded to the fender panels and the original front bumper was replaced by a 1952 Cadillac front bumper with the center section removed. The Dagmars were backed by a wire mesh grille. The rear fenders on the car were extended 6 inches and fit with 1953 Lincoln lenses which were frenched in. The deck trim and door handles were shaved and operated electrically. The rear bumper originated on a 1952 Pontiac. The exhaust tips were molded in to the bumper. The gas neck was removed and repositioned behind the license plate.[1]

Once the bodywork was completed the car was painted blue and white. To get the right stance the A-frame was reworked in front, the spring eyes were reversed in the rear, the frame was C'd, and the car was fit with 3 inch blocks in the rear. In order to get the car even closer to the ground, the body was channeled 5 inches over the frame.[1]

Please get in touch with us at mail@kustomrama.com if you have additional information or photos to share about Howard Clarkson's 1951 Chevrolet.