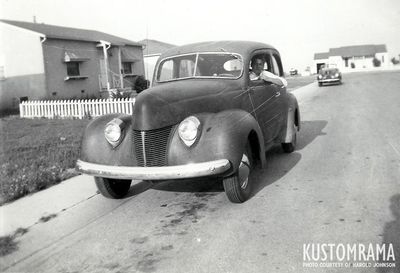 A photo of Harold with the tudor taken outside the family home in Inglewood in 1949. At the time Harold lived at 1133W 87th street. A local guy was responsible for the welding and lead work on this one, and Harold recalled that the hood was HEAVY! Photo courtesy of Harold Johnson. 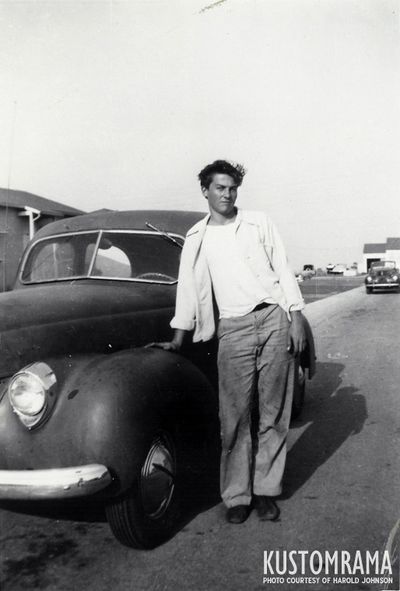 A photo of Harold next to his ride. The Ford was inspired by the trend of the time, and it was Harold’s first car. Photo courtesy of Harold Johnson. 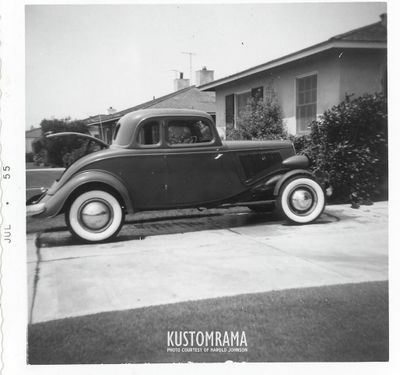 Harold sold the 1938 Ford about 1951. His next car was a 1934 Ford 5-Window coupe that he installed an Oldsmobile Rocket engine in. Photo courtesy of Harold Johnson.

Harold was born in Kingman, Kansas in 1931. His parents were Swedish, and they moved from Kansas to California during the depression. Harold had two older sisters, Helen and Betty. Helen and Betty worked as car hops at a drive-in on Figueroa and Florence Avenue called “The Wich Stand.” In 1945 Helen married Jim Kierstead. Jim served on a submarine during World War II, and after he got out of the Navy in 1945 he bought a 1939 Mercury that Sam Barris helped him restyle. Jim's Mercury is rumored to be the first 1939 - 1940 Mercury coupe that Sam Barris chopped the top on.[1]

At the time Betty was dating Dick Owens. “He was a real big tough guy. Quiet, but though! I remember a photo of him from the war, where he was posing with two decapitated Japanese heads in each hand,” Harold told Kustomrama. Dick was in the Army during WWII, serving his country. Betty and Jim got married after Jim returned from the War as well. Harold remembered that Dick had a 1940 Mercury convertible the first time he met him. At the time it was primered gray. Just as Jim's Mercury, Dick's convertible also received a chopped top by Sam Barris.[1]

Friday, December 5th, 1947, Jim Kierstead was T-boned by a Dueseneberg going south on Sepulveda and El Segundo Blvd. He was rushed to the hospital, but was pronounced dead on arrival. The Mercury was totaled. Dick never had the same spark for custom cars again, and he sold the Mercury shortly thereafter. Harold on the other hand, bought the 1938 Ford the following year.[1]

The build was started in 1948, and it was a typical mild custom that would roam the streets of Los Angeles at the time. A local guy went ahead and made the three-piece hood into a one-piece unit, making it appear more like a 1939 - 1940 Ford. Just as on Jim’s Merc, Harold installed a pair of aftermarket Seal Beam headlights. 1946 Ford bumpers were also installed before the rear fenders were leaded-in, and the running boards were removed. The car was then fit with Flipper hubcaps and blackwall tires.[1]

Harold bought a hopped up flattie for the car. The engine came from a race car the Mickey Rooney drove in the movie The Big Wheel. The engine was so heavy that it broke a spring on the front end of the car. Not having the bucks to fix it, he lowered the other spring. Now the trend at the time was to lower the ass end of your ride. At first embarrassed to have his car lower in the front, he eventually noticed other guys starting to lower their front ends. Harold doesn't know if he was the first, but he says he had never seen a dropped front end before his.[2]

Please get in touch with us at mail@kustomrama.com if you have additional information or photos to share about Harold Johnson's 1938 Ford.