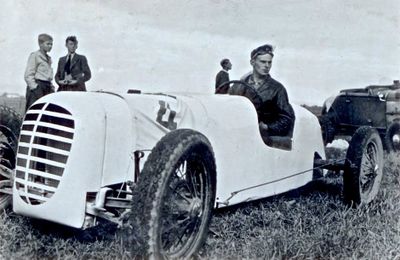 Greger Strøm with his first race car at Leangen in 1937. Greger understood that a low weight would be his key to success. With a total weight of 600 kg, he beat Norwegian race legend Arvid Johansen in front of 7000 spectators. Photo courtesy of Eirik Bøle.

The Greger Strøm Special No. 1 is a nordic special racer built by Greger Strøm of Trondheim, Norway. In 1937 Greger rode his bicycle to the Avus-racetrack in Berlin to see his idol Eugene Bjørnstad race his ERA. He got to hang out with Eugene and his crew in Berlin, and he even got a ride with them back to Norway after the race. Back in Norway Greger decided that he wanted a race car himself. At the time he didn't even own an automobile, so in the spring of 1937 he bought his first car, a 1930 Ford Model A four-door Sedan.[1] Greger paid 1800 NOK's for the Model A. At the time a normal Norwegian salary was 1.50 NOK pr hour. The sedan would be the starting point for Greger's first race car. The inspiration for the build came from a Finish race car built by Einar Alm. Einar's racer had competed at Bogstadvannet in 1935, where it actually beat Eugene Bjørnstad's Bugatti, ending up on 5th place. Arvid Johansen, who competed in the "Sportsvogn" class at the same race, was also beaten by Alm's time. Alm's race car was very light, and it was basically built from plywood and cloth.

When Greger built his first race car, he lived in Trondheim, working for a company called Gaden & Larsen. Greger wanted his race car to be a surprise at the race at Leangbanen, so it was built secretly. He drove the stock Model A around for a while, before he eventually parked it under a tarp at the parking lot where he worked. He started by removing the front axle. The front axle was modified so it could be mounted above the frame of the race car. After the front axle had been modified, he put it back under the Model A that he hid under the tarp. He continued by removing and modifying the rear axle, so that it could be installed under the frame as well. New brackets for the spring were welded on, before he could put the rear axle back under the tarp as well. The engine was removed and fit with a French built camshaft that Greger had borrowed from Arvid Johansen, as the camshaft wouldn't fit with the Record OHV head that Arvid ran. The engine was bored as much as possible before new pistons were installed. The head was shaved for higher compression. A Scintilla-magneto was installed so Greger could skip the heavy battery. The weight of the flywheel was reduced by 15 kg, about half of the original weight. Greger ran it without a fan. The front brake drums were retained, but they were empty inside, so Greger had only brakes in the rear of the car.

First test run of the engine turned out to be a failure. The camshaft provided enough speed, but the carburetor was not able to give as much fuel as it needed. Greger split the carburetor and modified the jet so it would run faster and provide a lot of power. The modified carburetor required high speeds. The rear end and transmission were kept stock on the inside. The result, according to Greger, was around 3000 rpm and 60-65 horsepowers. A Ford Model T frame was used for the build. The frame was fit with the modified Model A axles. The final build weighted about 600 kg, something that resulted in a good acceleration. Top speed was around 100 km pr hour. About a week before the race, the chassis was drivable and ready, but he had no body. The rolling chassis was rolled out on a Saturday evening after work. People were amazed to see what Greger had been up to, and even the boss honored Greger for what he had built. It was time for Greger to ask people for help, as he was still missing the body and various other parts. Greger had built the structure for the firewall. Hermann Eriksen built an aluminum grille, while a body man made most of the body parts. Greger kept the stock radiator, but he moved it behind the front axle. The stock steering gear was kept as well, but it had to be repositioned a little towards the centre of the car.

It didn't take long before everyone knew that Greger Strøm of Gaden & Larsen had built a race car. Until that Staurday, Greger had secretly worked on the chassis after work hours and during the nights. Some days he snuck back into the shop after dinner. There were some holes in the fence that he could use to sneak back in after dinner. A hand held lamp was used for light. A hacksaw and welder were heavily used, and even though chairman Langnæs lived on the second floor of the same building, nobody knew what was going on.

Friday night before the race, half of the panels on the tail of the car were missing, so the body could not be painted before Saturday. It was painted white on Saturday, the day before the race. Several newsapers had heard about Greger's creation, and on Friday both Dagsposten and Adresseavisen came to take pictures of the race car. Two men had to stand next to the car on the photos to cover up the unfinished tail.

During a test-run at Leangbanen the day before the race, the middle crankshaft-bearing broke, and the race car had to be towed back to shop. With help from Birger Knutsen and others, a semi finished bearing was adapted and mounted. They finished the engine up 3 o clock that night.

Greger understood that a low weight would be the secret of his success. Even though he had borrowed a camshaft from Arvid Johansen, he knew that the engine wouldn't produce much more horses then an stock engine. He started the race in second gear, and a had a lead position from the beginning. Arvid Johansen was competing in the same race, and Greger knew he had to keep him behind him as long as possible. Arvid didn't caught up with Greger during that race, and Greger won in front of 7000 spectators. In 1995 he told the magazine Right On that right then it felt like he had won the Indianapolis.[1]

After the race, Greger installed the front and rear axle on the Model A fourdoor again. He returned the camshaft to Arvid Johansen, and the engine disappeared. The race car was left rotting away. In 1995 nobody knew what happened to the Greger Strøm Special No. 1.[1]

Please get in touch with us at mail@kustomrama.com if you have additional information or photos to share about Greger Strøm Special No. 1.