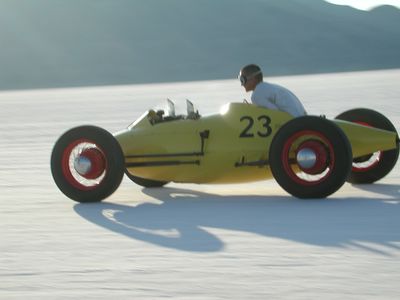 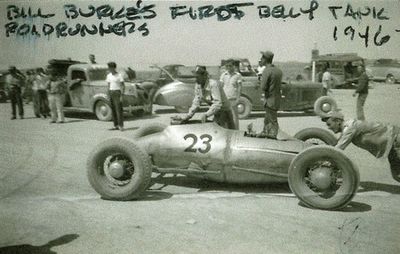 Bill Burke's P-51 Belly Tank in 1946. This is the original Belly Tank that Geoff commissioned Creative Motion Concepts to re-create.

Geoffey has loaded the Belly Tank on the roof of his Suburban in order to bring it with him to Florida. 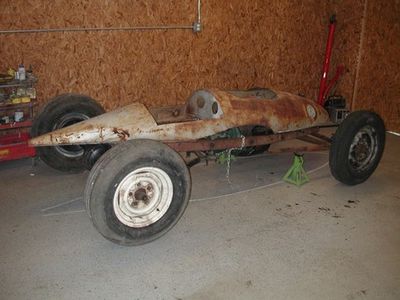 The Belly Tank during construction. Here it is resting on top of the Model T chassis.[1] 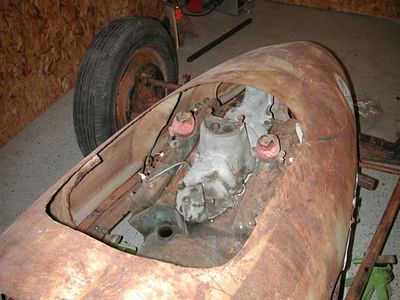 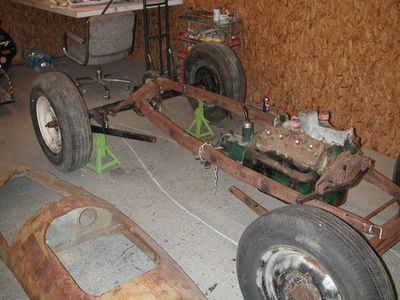 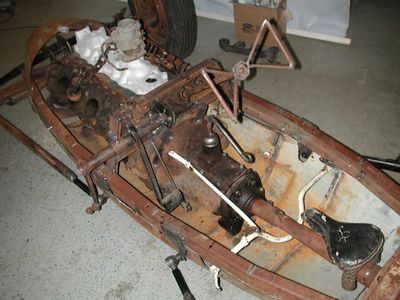 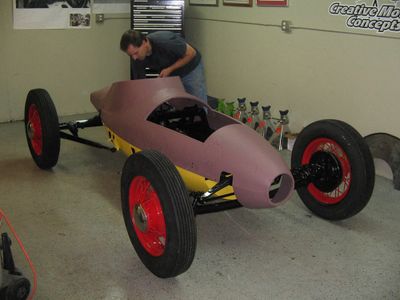 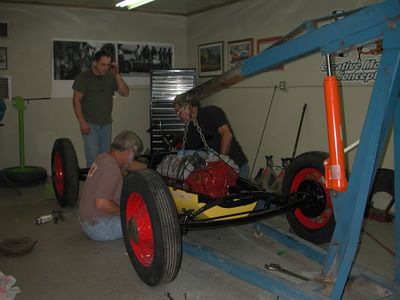 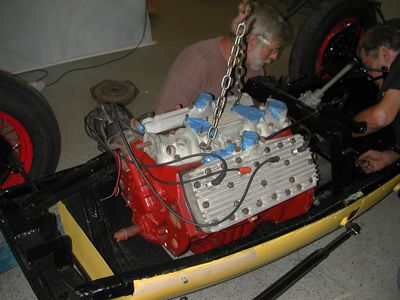 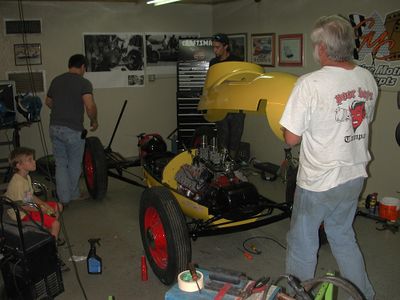 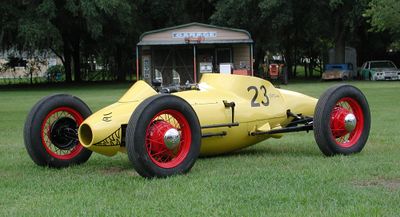 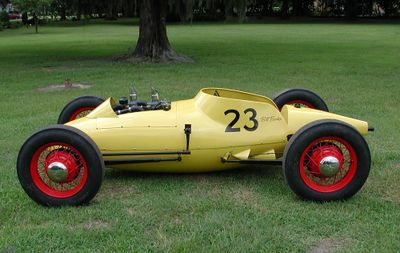 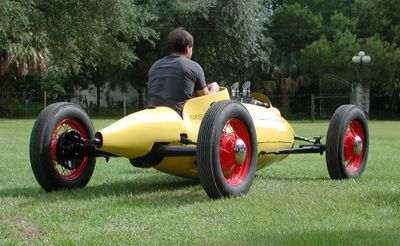 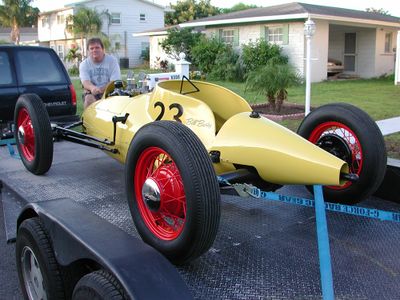 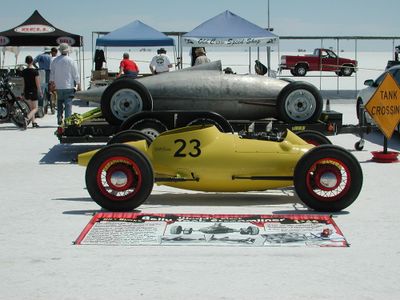 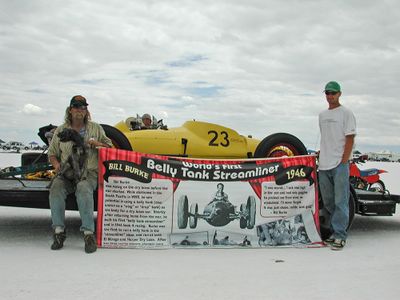 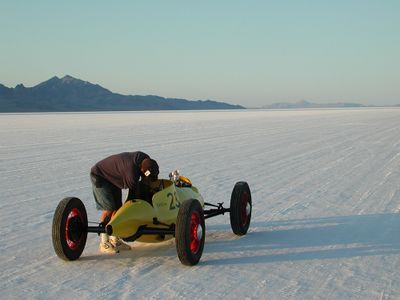 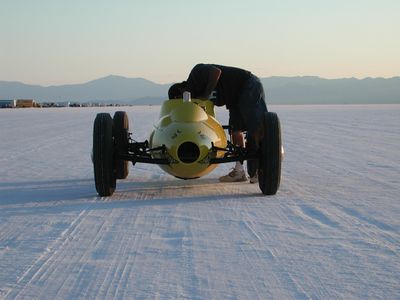 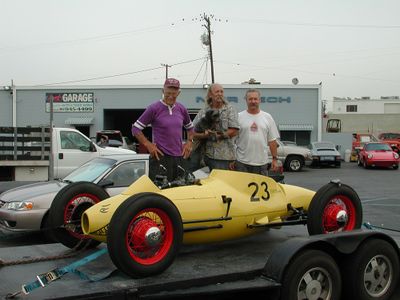 Bill Burke admiring the re-creation of his first Belly Tank. 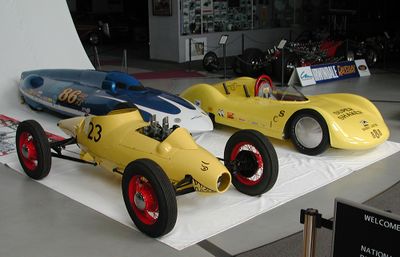 Geoffrey Hacker's Belly Tank is a re-cration of Bill Burke's P-51 Belly Tank built by Creative Motion Concepts for Geoffrey Hacker of Tampa, Florida. Geoffrey found the P-51 Belly Tank in Temacula, California in August 2008. When Geoff bought the Belly Tank it had already been equipped with Model A axles and a Ford V8 60 flathead by a local hot rodder. After buying the Belly Tank he showed Bill Burke some photos of his new project. Bill noticed how much the Belly Tank resembled his first Belly Tank, and told Geoff he should replicate that one. Geoff had other plans in mind for the Belly Tank and it took a while before Bill's suggestion gained traction with him. After bringing his Belly Tank to Ted Kempgens and Tom Bambard of Creative Motion Concepts Geoff realized that Bill was famous for many cars, but his first Belly Tank was the one he was most famous for and building a replica of that car would be a great way to honor him. Geoff researched Bill's original Belly Tank, which ran three times in 1946. Before he sold it in order to build larger and faster Belly Tanks he reached speeds of 131.96 mph. [4]

Since Bill ran a full-size Ford Flathead V-8 in a front-engine configuration, Ted and Tom had to reconfigure Geoff's tank which had already been cut for a rear-engine setup. During the build Geoff consulted frequently with Bill. Because everybody moved quickly to the larger tanks, there wasn't a lot of information available about how the early smaller tanks were built. Rather than build a tube frame, Geoff purchased a Model T frame that was narrowed and shortened to fit the tank's profile, just as Bill did it back in the 1940s. The V8 60 was replaced by a larger 8BA flathead V-8 with Fenton heads and intake. Both block and heads are technically incorrect since Bill used Edelbrock and Thickstun speed parts on his Belly Tank. Jon Phillips and Tim Masters built the engine for Geoffrey.[5] The flathead was hooked to a 1937 Lincoln three-speed. A shortened torque tube backed the flathead. Geoff used Model A axles, Model A springs, and 1934 Ford 17-inch wire wheels for the rest of the chassis. Bill kept the mechanical rear brakes, and ditched the front brakes, so Geoff decided to do the same on his recreation. Bill welded a bicycle seat to the torque tube of his racer, so Geoff researched which seat he likely used and sourced another.[4]

In May 2009 Geoff, Ted, and Tom decided to finish the Belly Tank in time for the 2009 Bonneville Speed Week. They accomplished their goal and the recreation made its debut it at the Speed Week. After Bonneville the trip went on to Bill's Shop. Bill was very excited about the build and couldn't stop lookimg at the re-creation.[4] From Bill's Shop the Belly Tank was taken to the NHRA Museum where it was exhibited along with two other Bill Burke built cars.[6]

March 14th, 2010 Geoff's Belly Tank will appear at the Amelia Island Concours d'Elegance. This will be the first Belly Tank to appear at a world class concours event.

Please get in touch with us at mail@kustomrama.com if you have additional information or photos to share about Geoffrey Hacker's Belly Tank.