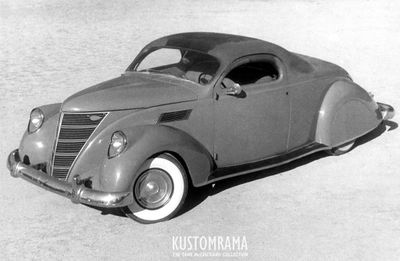 Gene's Lincoln as it sat in 1953. Photo from The Gene McCrickard Photo Collection.

1937 Lincoln Zephyr coupe owned by Gene McCrickard of Detroit, Michigan. Gene bought the Lincoln in 1953. It was his 6th car, replacing a 1948 Mercury Convertible.[1]

The Zephyr was Gene's first custom car. "My dad was a car guy and mechanic! He always made sure his kid had a car. But when I wanted the Zephyr, I had to give him the Mercury. Of course, I drove the Merc every time I had the Zephyr apart. Which was a lot! I was in high school and worked after school on the counter of Highland Park Hot Rod Shop," Gene told Kustomrama in 2017. "The body shop that chopped the top on the car was directly behind our hot rod shop. The name of the shop was Autoway Collision, and the fellow who did the work was Willy Franks." Autoway Collision was a very good regular body shop. They did not do custom work, and as far as Gene knows, the Zephyr was the only custom they did. "It was chopped for looks! It turned out to be just a shy over 4” chop. It also had a Kaiser Henry “J” rear window turned upside down."[1]

Gene's Zephyr was powered by a 1949 Oldsmobile engine that had been bored to 324 cubic inches. It ran ported 1954 Oldsmobile heads with Cadillac valves, a Clay Smith cam, Gotha adjustable rocker arms, a Nicson dual quad manifold with Stromberg 4-barrel carbs off a Buick, and custom headers by Jim Bernadic.[1]

No Money for Paint

Gene never had the money for a paint job, but he primered it a dozen times. "Remember, dark gray primer was a paint job in the 1950s!"[1]

Gene had the Zephyr from 1953 to 1967. By 1958 he had become a hardcore racer, and customs were of no interest to him anymore. "Everything from that point on was about going fast. Cars, boats, bikes, airplanes, you name it! Hell, if we could race locomotives we would have! If it was fast, we tried it. I sold the engine out of the Lincoln in 1959. I kept the car ’till my dad asked for it. He and a friend wanted to put a Chrysler “Hemi” in it. The riots hit in 1967 and everything changed! Never saw the car again."[1]

Please get in touch with us at mail@kustomrama.com if you have additional information or photos to share about Gene McCrickard's 1937 Lincoln.