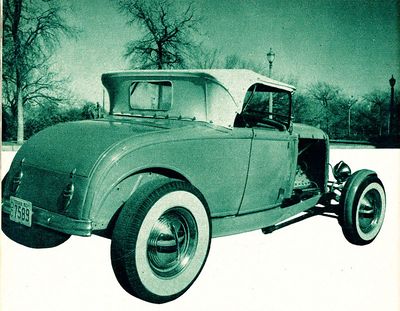 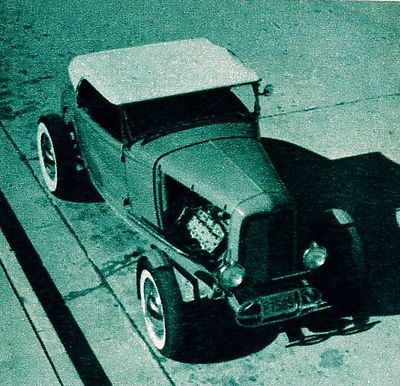 1932 Ford Roadster owned and built by Chapparal member G. C. Woodard, Jr of Fort Worth, Texas. Getting involved with hot rods and drag race in high school, "Bo" as they called him wanted a dual purpose car that he could both use on the streets and drag race with. The frame was from a 1932 Ford Coupe, and the roadster body was salvaged from a 1930 Ford Model A Roadster. The radiator grille shell was from a 1932 Ford as well, leaded smooth. The bumper was actually hand formed from tubing, and chromed. The front end was a stock 1936 Ford, except for the split wishbones, which were fastened to the frame with ball-joint hangers, and Monroe tubular shocks, which incidentally were also used in the rear. The springs were torched to give a stiffer spring action, and lower the car. The engine was a 283 cid. Ford 59 L block, bored to 3 5/16" with a 4 1/8" stroke. It ran a Clay Smith camshaft, and Edelbrock stroker kit. It also had Offenhauser heads and manifold with three Stromberg 97s on. The engine was also equipped with Edelbrock 1 5/8" special valves. Spark was supplied by a Harmon & Collins dual ignition system with Mallory coils. The car rolled on Flipper hubcaps on white wall tires. The 30' body was painted Red.[1]

Please get in touch with us at mail@kustomrama.com if you have additional information or photos to share about G. C. Woodard, Jr's 1932 Ford.