From Kustomrama
(Redirected from Eclipse)
Jump to: navigation, search 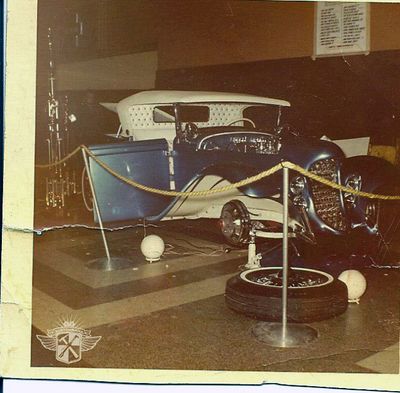 The Eclips at an indoor car show in Kansas City. Photo by Ernie Kirkland. 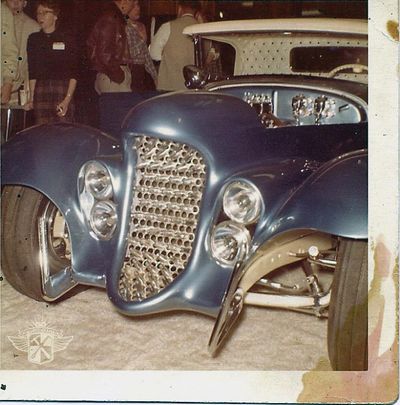 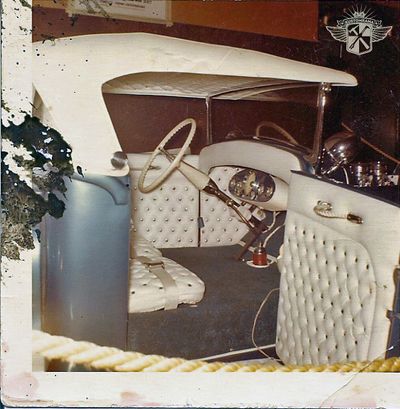 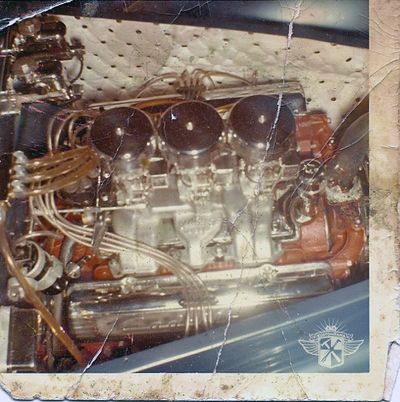 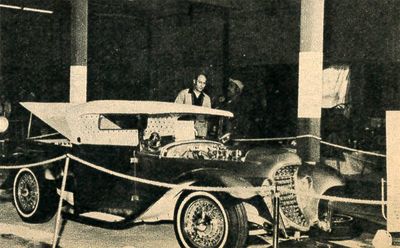 This photo of Ray's pickup from the 1959 Mid-America Auto Spectacular in Topeka appeared in Car Craft July 1960. The show was held October 10-11, 1959, and Ray took home the "Best in Show" award. Photo courtesy of Car Craft Magazine. 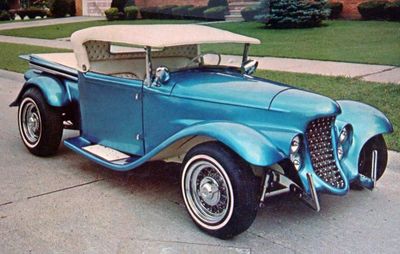 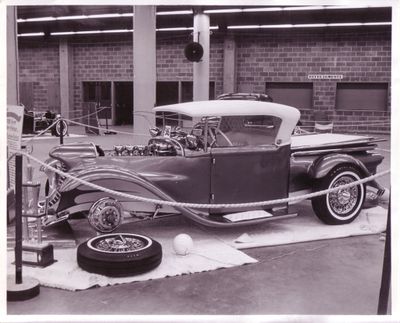 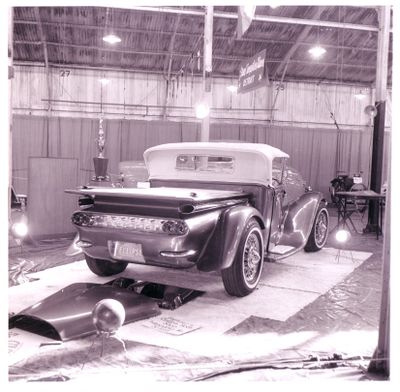 The truck at an indoor show in Tulsa in the early 1960s. Photo by George Barris 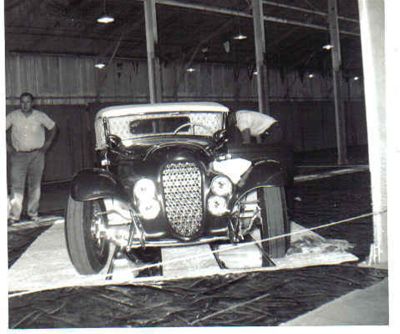 Another photo from the same show.[1] 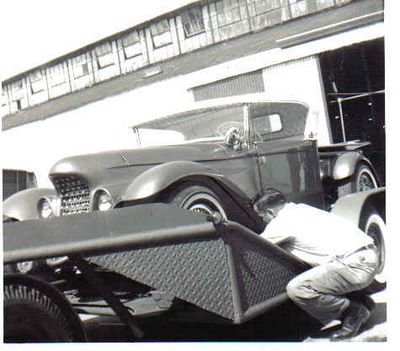 Ray's brother John loading or unloading the truck on to a trailer in Tulsa in the early 1960s.[2] 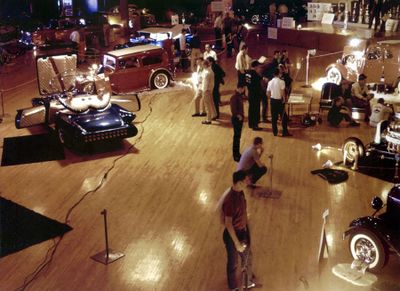 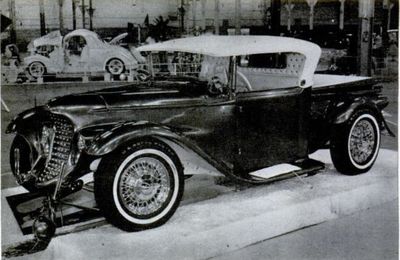 The Eclipse at the National Champion Custom Car Show in Detroit, 1961 where it became the sweepstakes winner. Photo by Don Honick 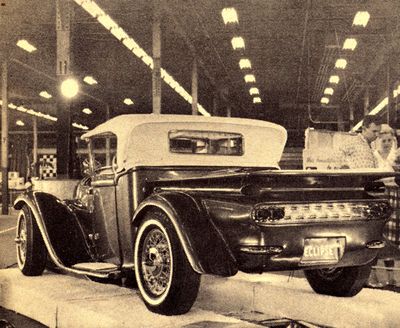 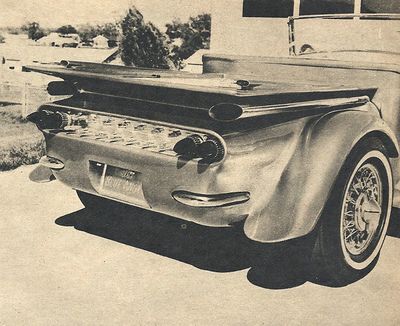 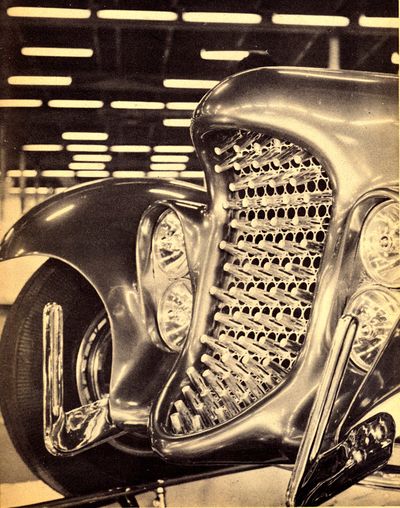 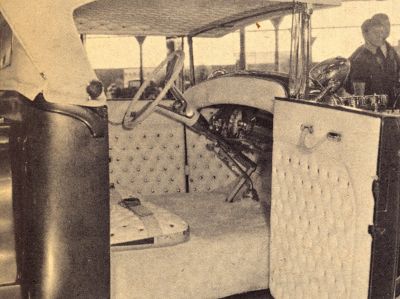 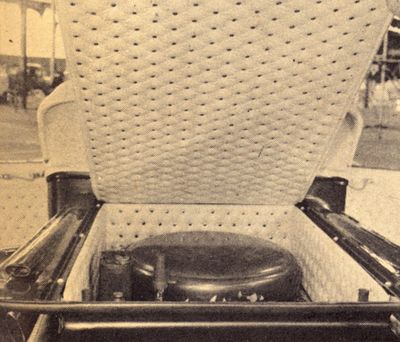 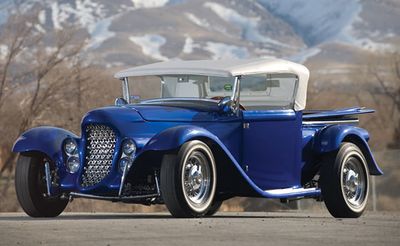 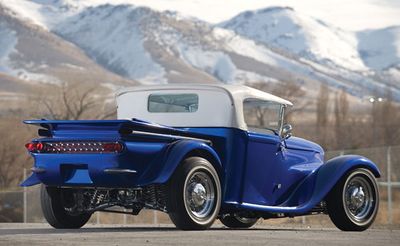 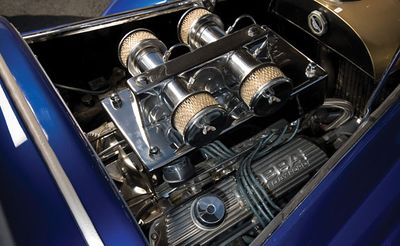 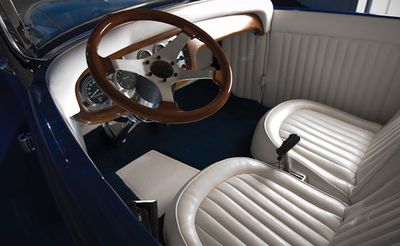 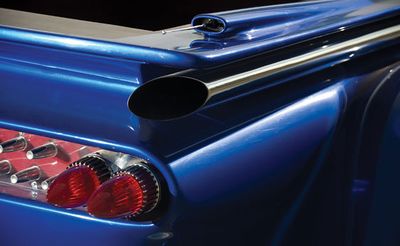 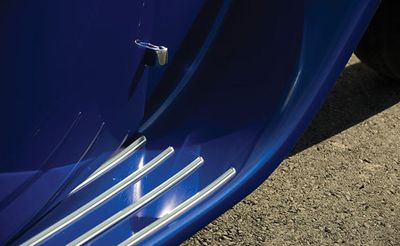 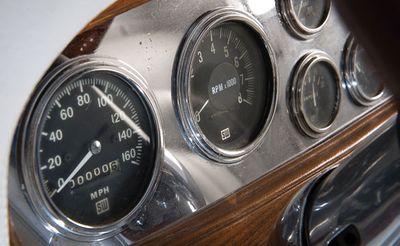 1932 Ford Roadster Pickup built by Ray Farhner and Doug Thompson. The car is also known as the Blue Angel, or the Eclipse. Ray decided that the best way to demonstrate what his shop could do was to build a car that would be a combination of a custom car and hot rod. A young Doug Thompson was hired to design and help build the car. Working out of Farhner's shop in Independence, Missouri the car took an estimated 4500 hours and $4400 to complete. The build was started in 1959.[4] The body of the 1932 Ford was Channeled 6 inches over the Z'ed frame. In order to lower it even more Ray and Doug also reversed the front spring and installed a 3 inch dropped ad chromed front axle. The front axle was hand-made. A 4 inch top chop was done to lower the truck even further. Up front the grille area was fabricated to house quad canted Lucas "Flamethrower" headlights and a grille made of 1958 Ford grille mesh and 1958 Cadillac grille spears. The headlight pods were set on either side of the grille and faired into the hood panels. The grille shell, hood, front fenders and running boards were molded in. A new hood opening was cut, and the louvers were smoothed over. Handmade L-shaped nerf bars and dual spotlights completed the front-end styling.[5] The cowl was also widened 4 inches.[6]

Doug originally designed the car with a plain box-shaped bed, but Ray had other plans. He modified a pair of 1959 Chevrolet quarter panels that he used as bed sides. A pair of molded 1929 Ford Model A fenders were turned backward and placed into the quarter panels. The back also incorporated a rolled pan with an inset license plate and wraparound bumperettes. The rear fascia was filled with even more 1958 Cadillac grille spears. Four DeSoto-like blinker were fit in the rear[6], these were later replaced by four 1959 Cadillac taillights. Exhaust tubing was grafted at the top of the bed to house twin antennas. Below the twin antennas ran exhaust pipes made from Ford Model A driveshafts. The bed floor was done in Philippine mahogany concealed by a tonneau cover.[5]

The interior was upholstered by Art West of Kansas City. It was done in white Naugahyde with blue buttons tuft up. The carpet was white. The dash, step pads on the running boards, bed and engine compartment were also padded and covered in white Naugahyde. Art also upholstered the custom made top.[5] The steering wheel used in the car was from a 1959 Oldsmobile, and the instrument panel was from a 1956 DeSoto.[6]

The Eclipse was powered by a 1954 Cadillac[4] V8 that was bored 1/8 inch over and fitted with an Iskenderian cam, Jahns pistons, Edelbrock Manifold, and triple Stromberg 97 carbs. The engine was hooked to a 1939 Ford transmission with Lincoln Zephyr gears. Once the bodywork was completed, the car was painted with 22 coats of Moon Glow Blue Pearl lacquer. The underside of the fenders were painted white and fit with scallops. [6] 1956 Chrysler chromed wire wheels with thin whitewalls gave the car a sporty appearance.[5]

The car was first dubbed the "Blue Angel" and competed at the 1960 NHRA Show in Detroit where it beat out the Ala Kart for best of show. Ray also brought the Blue Angel to Oakland to compete in the 1960 Grand National Roadster Show. Ray continually changed his truck to keep it show competitive[4] and within a couple of years Ray had changed the paint to a darker shade of blue and renamed the car the Eclipse. At the same time Ray started his own show series, using the Eclipse as a regular featured custom.[5]

In 1979 custom car collector Jack Walker bought the car from Ray Farhner. Ray sold the car to Jack if he promised to let Doug Thompson restore the car, and if he would let Ray use the car on his show circuit again. Jack agreed, and Doug was set to restore the car he had helped create years earlier. During the restoration Doug did some changes to the car. He removed the step pads and tonneau cover, made a walnut box for the inside of the bed, and cut a Plexiglas bed floor that would allow a view of the rear end. Inside the car received walnut trim, and the upholstery was updated with pure white Naugahyde. The running board strips replaced the pads and the top with its dramatic 4 inch front overhang was redone. [4] The Eclipse was also upgraded with modern components including a Ford 302 CID engine, a Jaguar independent rear suspension, a Super Bell front axle, and disc brakes. After the restoration was completed, Ray leased the car for two years. After that Jack took the car on a tour on his own. The tour included a trip to Europe, and six years at Darryl Starbird's National Rod & Custom Car Hall of Fame Museum in Afton, Oklahoma. The car was restored again in the mid 1990s. In 2005 Jack sold the car to Mark Moriarity of Mound, Minnesota.[5]

September 26, 2009 the Eclipse was sold at the Icons of Speed & Style Auction hosted by RM Auctions at the Petersen Automobile Museum in Los Angeles, California. The selling price of the car was $ 85,250 USD.

Please get in touch with us at mail@kustomrama.com if you have additional information or photos to share about Ray Farhner's 1932 Ford.