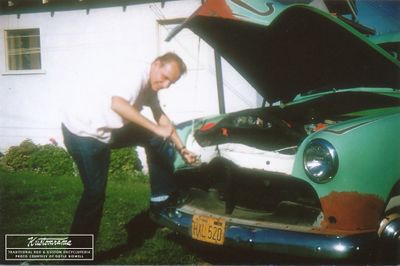 Bidwell working on the Ford. He lived his early years in Torrance, California. His father was an accomplished artist and Doyle displayed a talent for art early on. As he neared his teenage years his artistic interests turned to custom cars and hot rods. Noice the scallops he has added to the hood and fenders. Photo courtesy of Doyle Bidwell, provided by Howard Gribble. 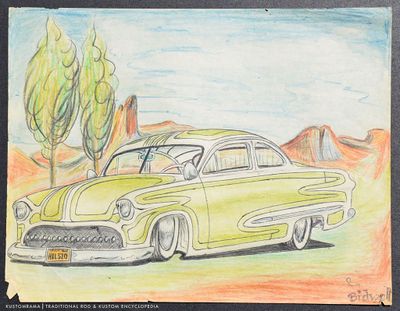 One of Bidwell's design proposals for his Ford. In 1959, as a freshman in high school, Doyle met Howard Gribble, who was also drawing his dream custom cars on school notebook paper. They quickly became friends and encouraged each other in their automotive art. The result was a sizable archive of those drawings that have survived to this day. Photo courtesy of Howard Gribble. 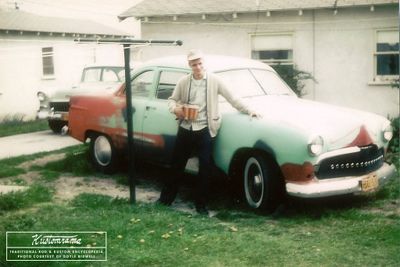 Another photo of Bidwell in front of his in-progress custom. Upon meeting in high school Doyle and Howard discovered they had another thing in common. Both of them owned 1950 Fords and each was actively involved in customizing those cars. Neither was 16 years old at the time, which was the legal age to obtain a driver's license. But both were working on custom modifications to their cars despite being very limited in the way of money. All work on the cars had to be done by themselves and so neither of these high school projects saw completion. Photo courtesy of Doyle Bidwell, provided by Howard Gribble. 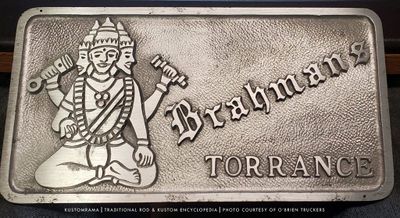 Doyle belonged to a couple of clubs while he was in high school. "We started one called the Brahmans," Howard Gribble told Sondre Kvipt of Kustomrama in 2020. "Then that club later became the Senecas.” While Brahmans is a religion in India, Seneca is an Indian tribe in the New York area. Howard has no idea why they picked those names, "probably because they sounded cool." The guys never made any jackets or shirts, "no, we were lucky just to afford the plaques." It was either Howard or Doyle that made the plaques. Photo courtesy of O'Brien Truckers.

1950 Ford Coupe owned by Brahmans of Torrance car club member Doyle Bidwell of Torrance, California. Bidwell was working on the Ford when he met Howard Gribble as a freshman in High School in 1959. Neither was 16 years old at the time, which was the legal age to obtain a driver's license. But both were working on custom modifications to their cars despite being very limited in the way of money.[1]

Doyle's Ford was nosed and decked before he modified the front by removing the bullet in the center of the grille. The leading edge of the hood was filled in before an upper grille bar from a 1951 Ford was installed along with a custom made grille. Construction photos also show that Doyle was experimenting with different scallop designs while he was working on the car. All work on Bidwell and Gribble's car was done by themselves and so neither of these high school projects saw completion.[1]

Please get in touch with us at mail@kustomrama.com if you have additional information or photos to share about Doyle Bidwell's 1950 Ford.