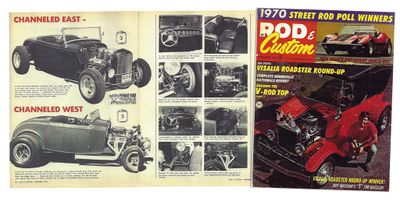 In 1970 Don's roadster was featured in the December issue of Rod & Custom Magazine as a "East Coast vs West Coast" car. At the time it was owned by 35-year old George Chatterton of Dayton, Ohio. 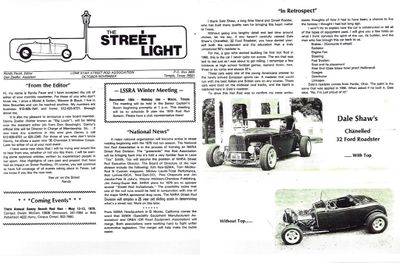 In 1978 two photos of the car appeared in The Street Light magazine. By then the car had been sold to Dale Shaw of Austin, Texas. 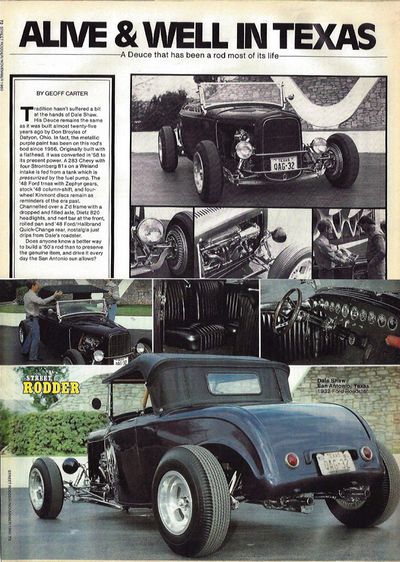 Dale's roadster as it appeared when it was featured in Street Rodder November 1980. 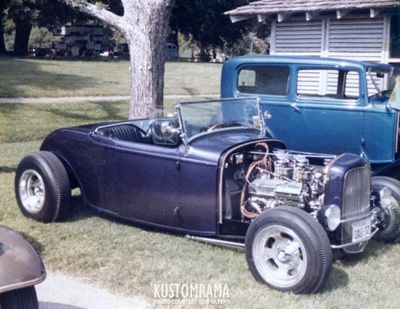 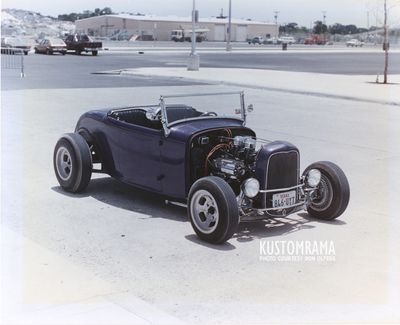 The roadster as it sat after Dale Shaw had reworked and repainted it. Photo courtesy of Ron Olfers. 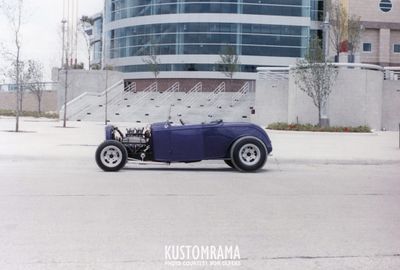 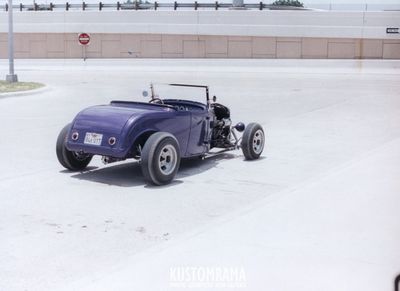 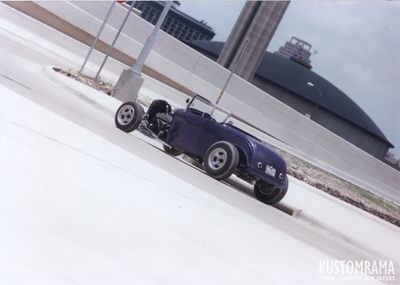 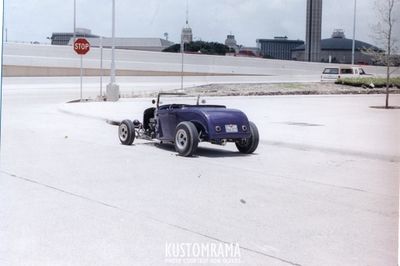 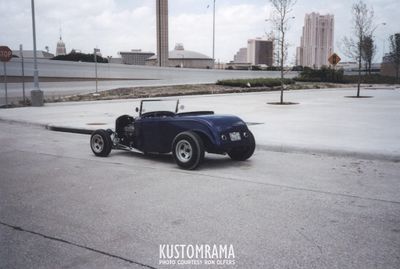 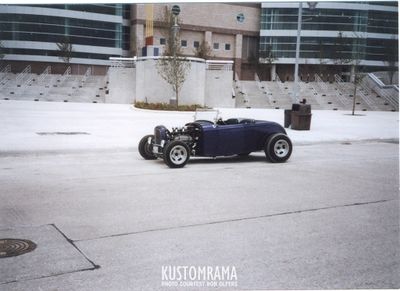 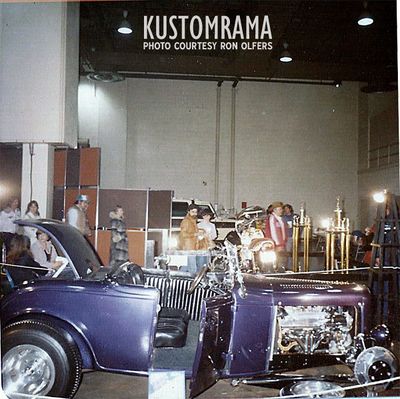 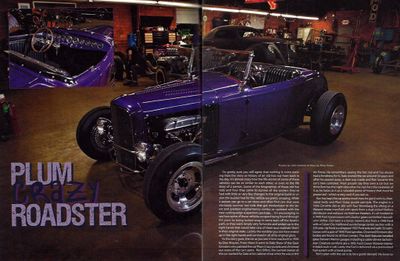 In 2011 Ron's roadster was featured in the Summer issue of Traditional Rod & Kulture. 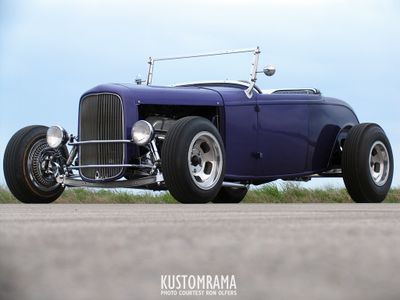 Ron's roadster as it appeared in 2017. Photo courtesy of Ron Olfers. 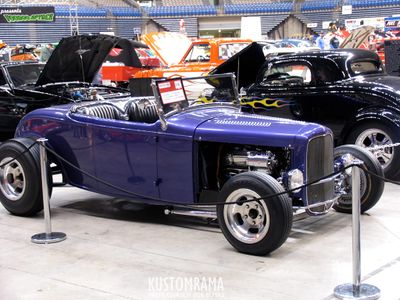 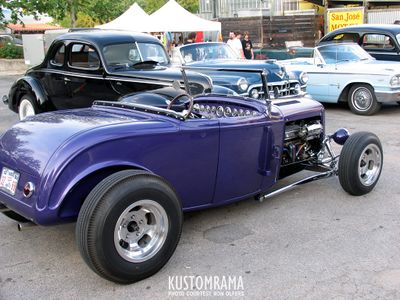 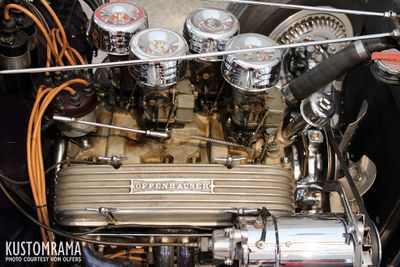 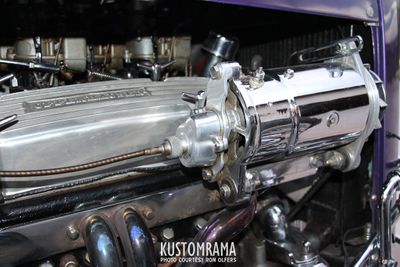 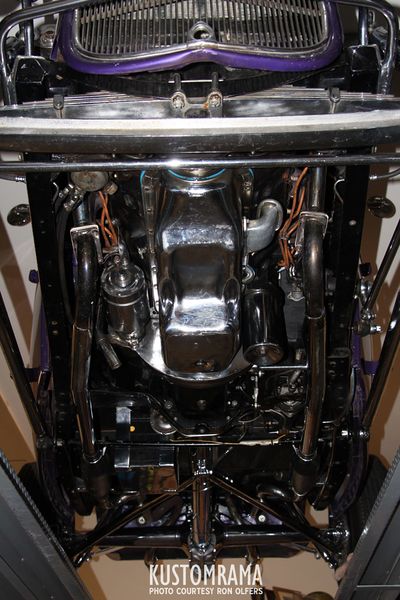 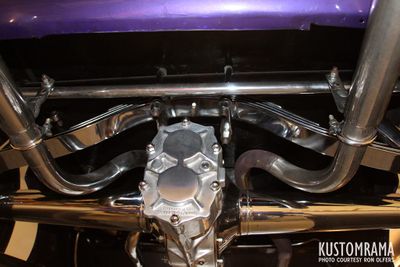 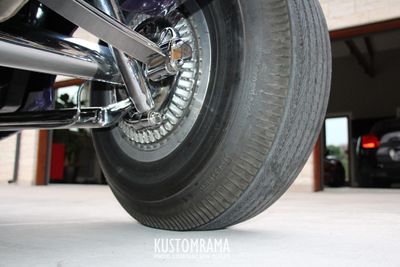 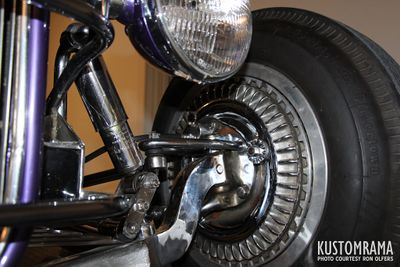 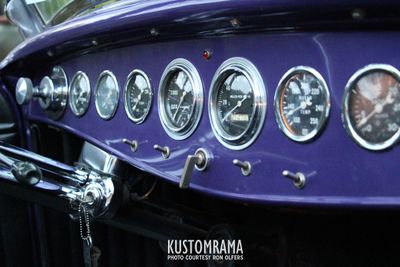 Don originally built the roadster in 1951.[1] He wanted the car to sit low, so he Z'd the frame and channeled the body. The grille shell was filled and sectioned before Don installed a wraparound nerf bar. It was powered by a Ford Flathead V-8 engine before Don gave it a deep purple paint job.[2]

In 1956 Don installed a more powerful 1956 Chevrolet Corvette 283 engine in the car. The engine ran a Weiand 4 carb manifold with 4 Stromberg 81 carburetors and a rare dual coil Mallory distributor. The carburetors were fed from a tank that was pressurized by the fuel pump. Don was a mechanic at Indy for 8 years, before he went on to build sprint cars and street rods.[3]

In 1970 Don's roadster was featured in the December issue of Rod & Custom Magazine as a "East Coast vs West Coast" car. At the time it was owned by 35-year old George Chatterton of Dayton, Ohio. The story stated that the roadster was built in 1956. When the photos for the story were taken, George ran Appliance Plating wheels with Firestone tires. It featured a handmade wraparound grill protector with custom made shock brackets. The grille was sectioned, and it ran a handmade radiator and Dietz 820 headlights. The engine was hopped up, and it still ran a Weiand 4 carb manifold with 4 Stromberg 81 carburetors and the rare dual coil Mallory distributor. Fully chromed Kinmont brakes all around provided stopping power. The steering column was a chromed 1948 Ford unit. The upholstery featured black pleats and black carpets, and it had a Fairlane convertible chrome piece across the top. The top was cloth. The windshield was kept un-chopped. The dash housed 9 Stewart-Warner curved glass gauges.[2]

In the mid 1970s Dale Shaw, of San Antonio, Texas bought the car. Dale, who was the President of the San Antonio Gear Grinders,[1] was not aware about the history of the car. It was through the Rod & Custom December 1970 magazine article that he later got Don Broyles name as the builder of his car.[3]

Dale installed a Culver City Halibrand Quick Change rear end on the car. At the time he owned Alamo Plating, so he chromed the axle housing, whishbone and driveshaft housing. He also chromed and installed a Model A rear spring for a cleaner appearance. During the same operation the body was lifted off the frame, and the frame was reinforced where it was Z'ed for strength.[3]

After the frame had been reinforced it was painted black. The body was given a Metallic Plum Craze paint job, just as Don had had it. During the rebuild, Dale also changed the license plate cover. It had a 1950 Ford license plate holder that Dale replaced with an aluminum frame with a small consealed light. The frame was recessed into the body. The paint and reassembly was done by Rick Davis of San Marcos, Texas.[3]

Ron Olfers of Austin, Texas worked at Dale's cabinet makers shop while he was serving in the US Air Force. Dale kept on to the car until 1995 when he got sick. He was very worried that his daughter's boyfriend was going to get the car and change it up dramatically, so he sold it to Ron for a fair price. Ron promised Dale that he would not change the car and be its caretaker.[1]

After owning the roadster for 20 years, Ron has decided that time has come to find a new caretaker for the old hot rod. Ron is asking $94,500 for the car. Get in touch with Kustomrama at mail@kustomrama.com if you are interested in the car and wants to get in touch with Ron.

Please get in touch with us at mail@kustomrama.com if you have additional information or photos to share about Don Broyles' 1932 Ford.