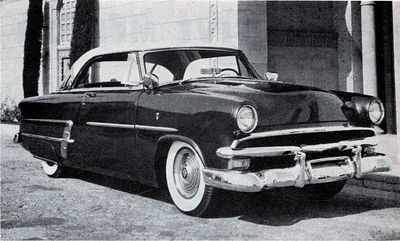 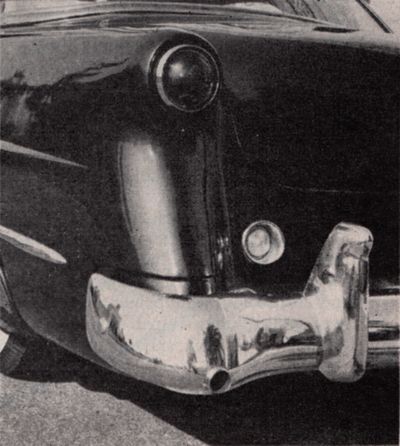 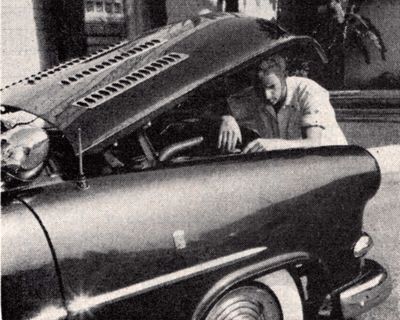 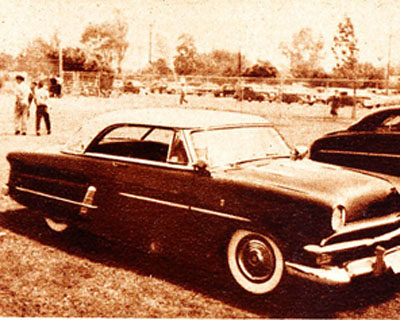 1953 Ford Hardtop restyled by Barris Kustoms for Dick Meyer. The front end was customized by shaving the hood and frenching the headlights. The stock grille bar was replaced by a Kustom Kraft 1953 Ford grille bar made from 18 inch gauge metal with no center bullet, these could easily be purchased at the Barris shop for $ 7.95. The antenna on the left fender was removed and a 1949 Chevrolet license plate guard was added to the front bumper. Kustom Chrome side rub strips, an accessory which Barris sold for $ 4.95 each were mounted on the front fenders and doors to give it a cleaner appearance, Barris Crests were added off course. The deck lid was shaved and the taillights were frenched to match the headlights. The exhaust pipes were relocated to the bumper corners. The rear view mirror was removed from the sealing and installed on the dashboard. Dick wanted to achieve a continental flavor, so he decided to have the hood fit with four Grand Prix louvers. These particularly louvers could be purchased at almost every accessory stores at the time. They were installed with six screws and they were possible to make functional. Barris sold these for $ 1.0 each unit. To give it the right stance, it was lowered and fit with dual spotlights.[1]

Please get in touch with us at mail@kustomrama.com if you have additional information or photos to share about Dick Meyer's 1953 Ford.