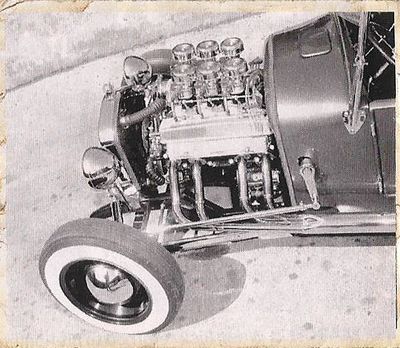 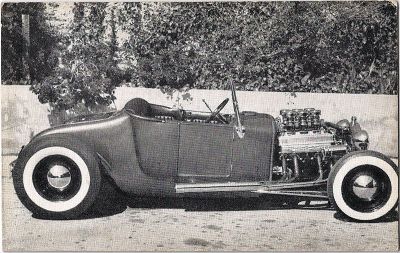 The front of an old wanted card for the car. Probably a card that Phil made up after regretting that he sold the car. Photo courtesy of Rod & Custom Magazine. 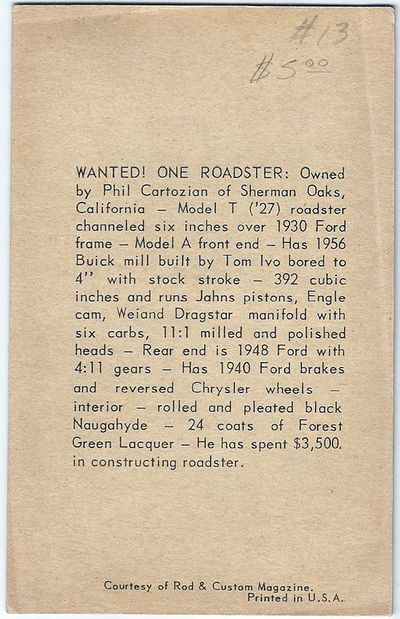 The back of the wanted card.

1927 Ford Model T Roadster owned by Throttle Stompers member Dean Batchelor. The body on the roadster was channeled 6 inches over a 1930 Ford frame. The front end was Model A as well. Dean worked part time at Valley Custom Shop, and the body work on the roadster was done at Valley Custom. Greg Sharp remembers the car being passed around the San Fernando Valley for years. Road Kings of Burbank member Don Prudhomme owned the car some time after Dean. Don gave the car 24 coats of Forest Green lacquer before he sold it to support his new dragster habit. Don sold the car without even driving it. Phil Cartozian of Sherman Oaks, California was the last known owner of the car. In March of 1960, while Phil owned it, Rod & Custom Magazine shoot a featured story on the car that appeared in Rod & Custom December 1961. At that time, the roadster featured a heavily chromed 392-inch 1956 Buick engine that Tommy Ivo had built. The engine was bored to 4" with stock stroke, and it featured Jahns pistons, an Engle cam, a Weiand Dragstar manifold with six Stromberg 97's, and 11:1 milled and polished heads. The rear end at the time was a 1948 Ford with 4:11 gears. The brakes were from a 1940 Ford, and the wheels were reversed Chrysler wheels. The interior was rolled and pleated black Naugahyde, and the body was still green. According to an old wanted card, Phil had spent $3,500 on the roadster.

Please get in touch with us at mail@kustomrama.com if you have additional information or photos to share about Dean Batchelor's 1927 Ford.