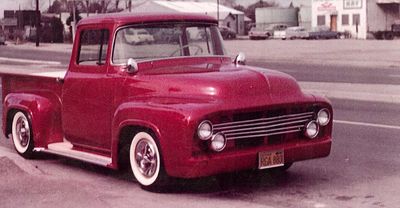 The truck as it looked after Larry Watson had painted it Candy Red. This was one of Larry's first Candy red paint jobs and the photos were a gift from Larry to Jerami Schoeman who bought the Little Nugget in 1995. Photo by Larry Watson. 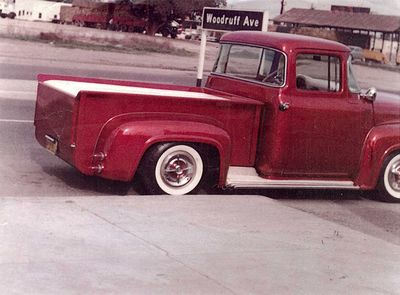 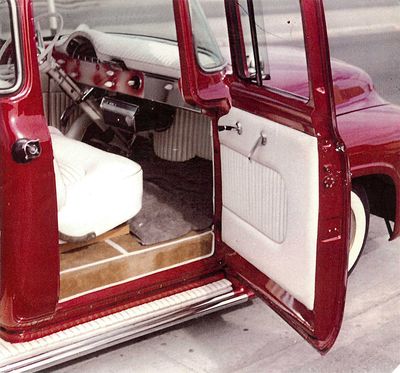 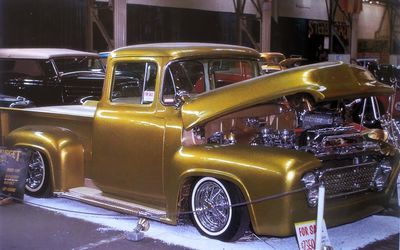 The truck as it appeared at the 1963 National Roadster Show after Dave Robertson had it restyled it into the Lil Nugget. In front of the truck is a for sale sign, the price Dave was asking was $2,350. Photo by Andy Southard. 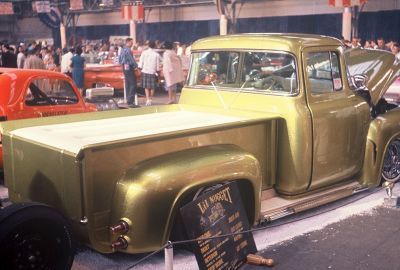 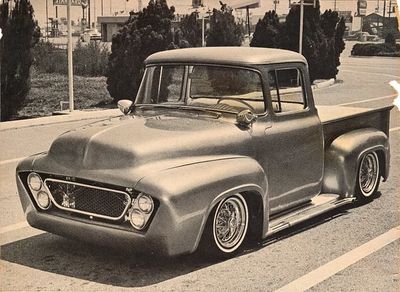 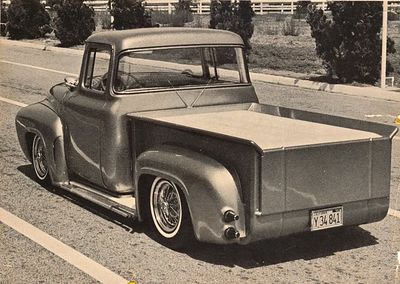 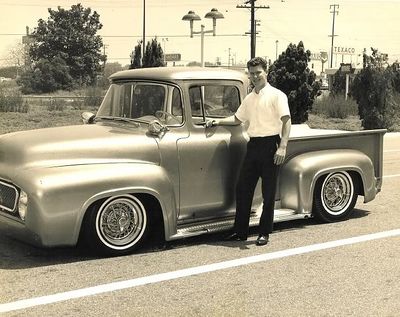 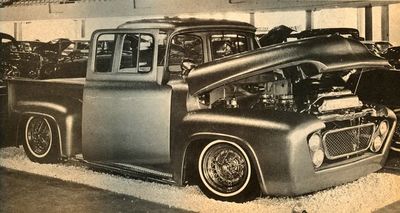 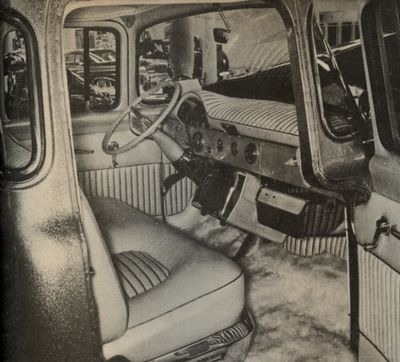 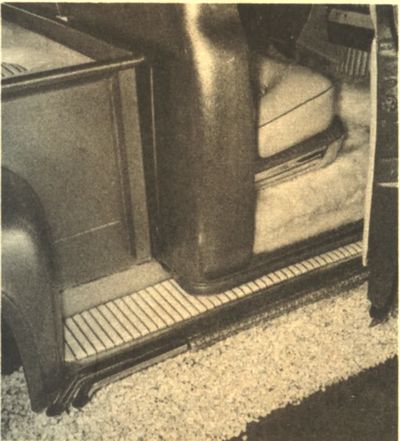 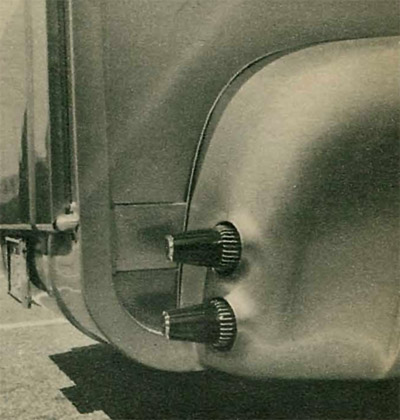 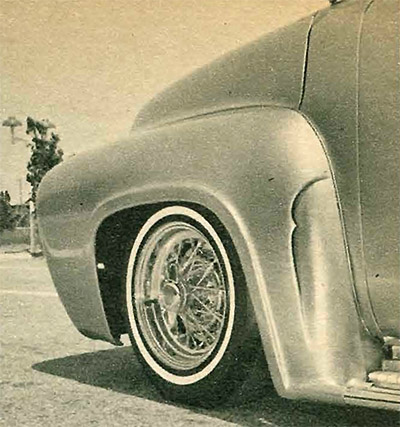 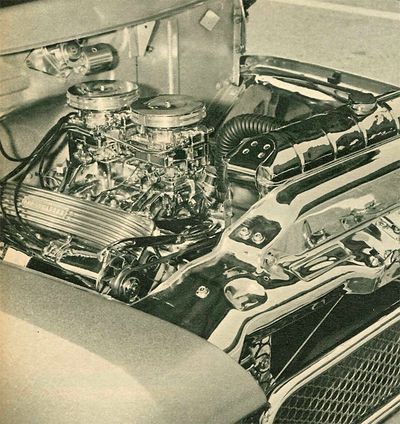 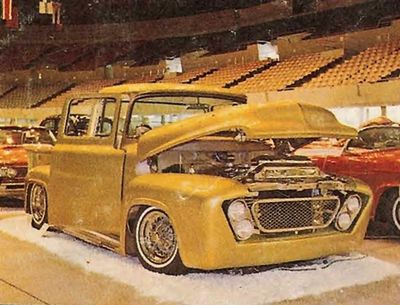 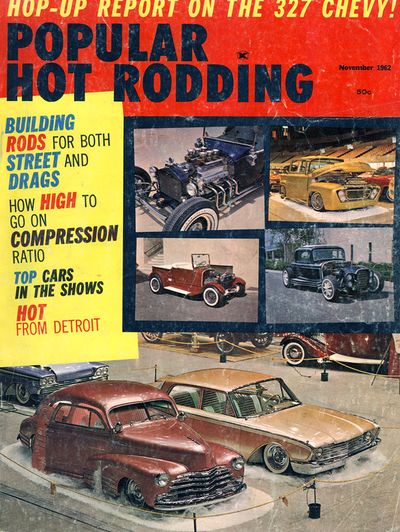 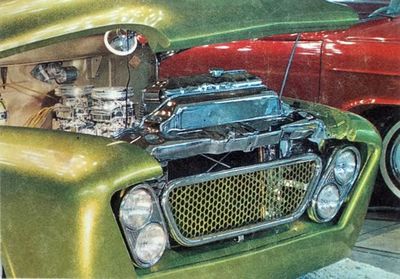 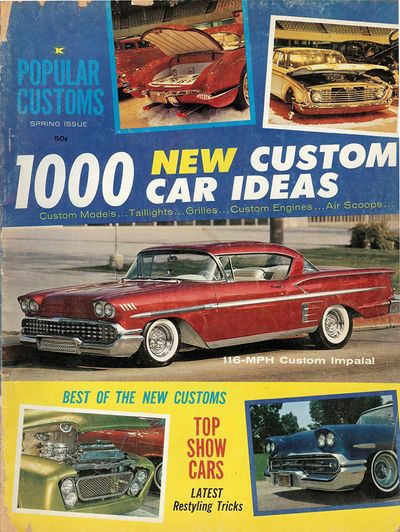 The Lil Nugget on the cover of Popular Customs Spring 1963 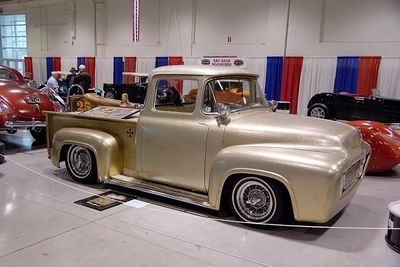 The Lil Nugget at the 2009 Grand National Roadster Show.[1] 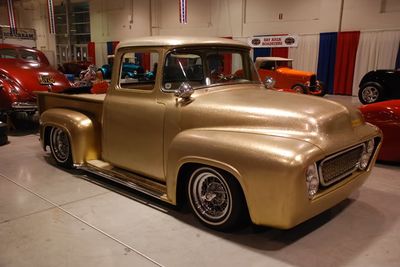 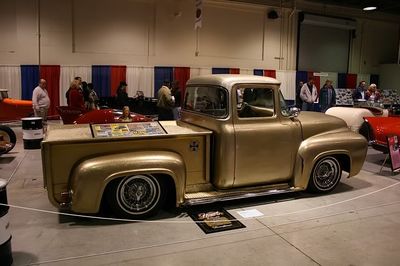 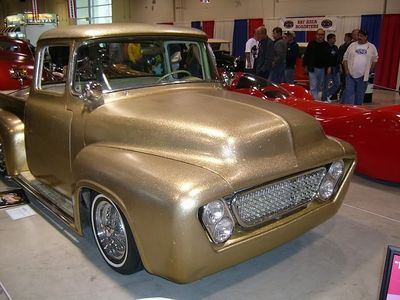 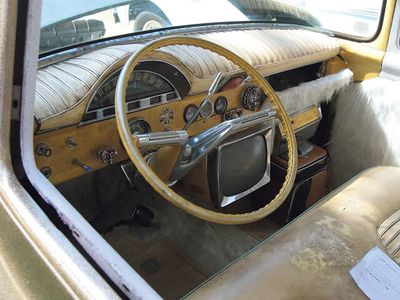 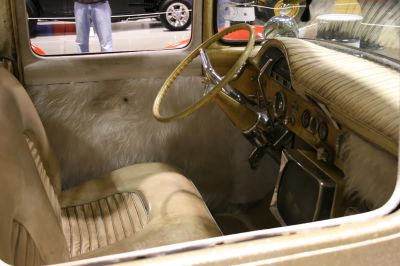 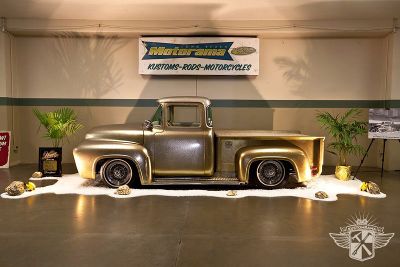 The Lil' Nugget at the 2011 Long Beach Motorama. Photo by Robert A. Radcliffe Jr..

1956 Ford F-100, also known as "Lil Nugget". According to Jerami Schoeman, who bought the truck in 1995, Bill Hines did most of the lead work on the truck. It was supposedly Bill's brother who owned the truck when Bill restyled the truck in the late 1950s or early 1960s. The front and rear bumpers were removed and rolled pans were installed. The front pan was rolled to meet the pinched front fenders which had vents cut into them. Bill shaved the door handles, nosed the hood and removed the stock taillights before he molded four Mercury taillight lenses set in 1959 Cadillac rims into the rear fenders. The front end was further restyled by replacing the stock grille and headlights with canted quads and a handmade tube grille. Bill also installed dummy chromed dual lakes pipes and dual spotlights before he sent it to Larry Watson of Watson's House of Style who gave the truck a candy red paint job. According to Larry it was one of his first candy red paint jobs.[2] The bed-cover, interior and running boards were fully upholstered in pearl white pleated Naugahyde by Eddie Martinez with gold tone beading used for accent.[3] The glove compartment door was chromed, custom knobs were installed and a Motorola HiFi radio was installed under the dash.

The truck was involved in a crash and Jerami believes Dave Robertson of Hollydale, California bought the remains and had it rebuilt as the "Lil Nugget".[2] The grille opening was reworked and fit with a new pair of canted quad Chevrolet headlights and a custom grille formed from tubing. Perforated mesh from a 1958 Ford was used inside the grille. Bud Lehner of Art Chrome Body Shop did the metal-shaping, while Art Lehner painted the truck with 65 coats of Lime Gold Metalflake. In order to collect show points, Dave also upgraded the interior by installing an Admiral TV. When the truck was featured in Car Craft March 1963 it had been fit with a 1962 Oldsmobile tach and a deep dish 1960 Oldsmobile steering wheel. Under the hood lurked a hopped up 1959 Cadillac 390 cubic inch engine. The engine had 10.5:1 compression and was equipped with a Eldorado dual quad set-up. Virtually everything in the engine compartment except for the block and firewall was chromed. Chromed parts included the ported and polished heads, the manifolds, radiator and windshield wiper motor. Fanbelt, spark plug wires and radiator hoses were done in an unique black rubber, plastic or neoprene. The engine was hooked to a beefed up Hydramatic transmission. After turning the truck in to the Lil Nugget, Dave fit the truck with chromed Buick Skylark wheels. According to the Car Craft feature Dave spent nine months and $4200 creating the restyled kustom.[3] In 1963 the Lil Nugget was exhibited at the National Roadster Show in Oakland, California. At the show the truck was advertised for sale and Dave wanted $2,350 for it.[4]

In 1995 Jerami Schoeman of Riverside,California bought the truck from an old man in his hometown. It had been in storage since the late 1960s and was in a good condition. Many parts were stored in boxes and on the bed of the truck when Jerami bough it. Jerami had known about the truck for years, but the man refused to sell it. Sometime prior to 1995, the owner was murdered and Jerami got the truck from the lien sale. Larry Watson provided Jerami with information on the truck. He also put Jerami in touch with its previous owner Dave Robertson. Dave had the old Buick wheels from the truck, and Jerami was able to buy these from him. Eddie Martinez, who did the original interior, helped Jerami with the interior when he was doing the rebuild.[2]

Please get in touch with us at mail@kustomrama.com if you have additional information or photos to share about Dave Robertson's 1956 Ford.