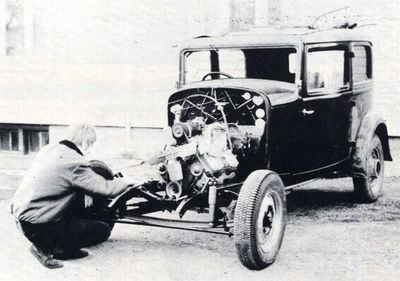 A construction photo of the Jørgensen Brothers' Hot Rod. This photo was published in a featured story about the car in Amcar Vol. 3 - No.8 - 1978. Photo courtesy of Amcar Magazine. 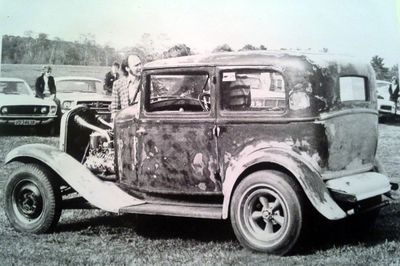 An under construction photo of the tudor. 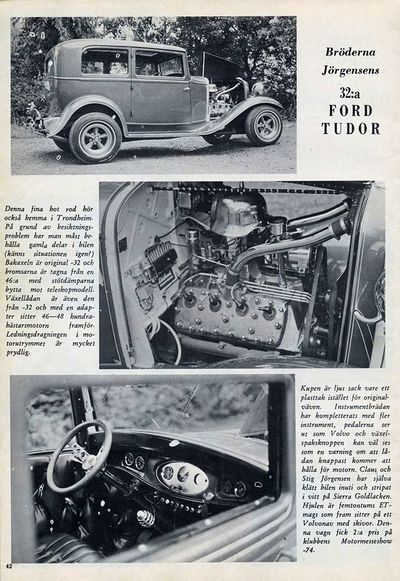 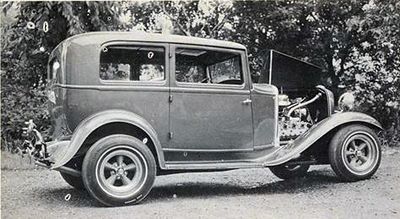 The tudor as it sat when it was featured in Colorod Nr 9 1974. Photo courtesy of Colorod Magazine. 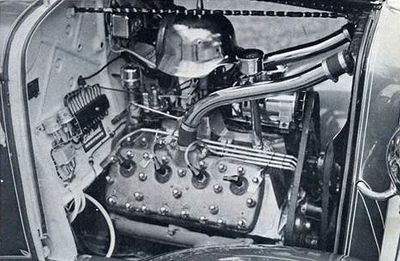 A German helmet from WWII was used as air filter. Photo courtesy of Colorod Magazine. 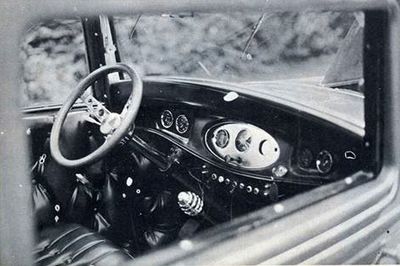 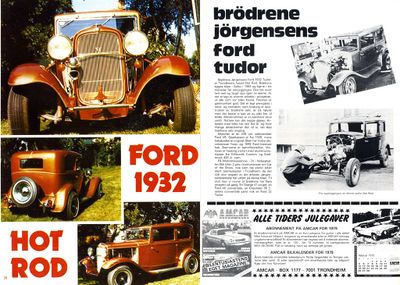 Amcar Vol. 3 - No.8 - 1978 ran a featured story on the first hot rod of Trondheim. Photo courtesy of Amcar Magazine. 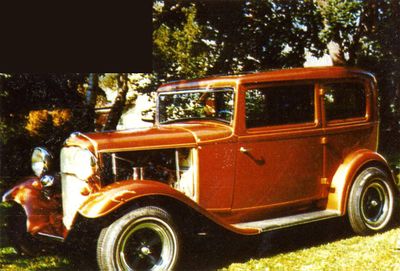 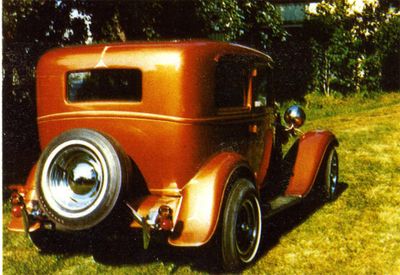 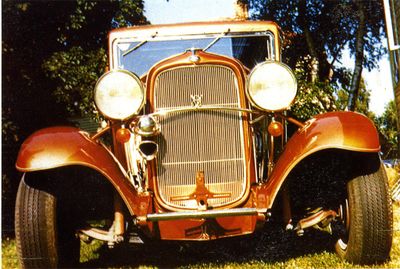 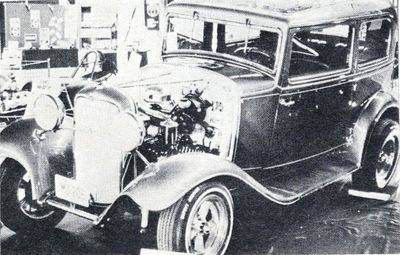 1932 Ford Tudor owned and restyled by Claus and Stig Jørgensen of Trondheim, Norway. Known as Trondheim's first hot rod, the Jørgensen brothers bought the old tudor in Selbu in 1969. They drove it for 3 months before they decided to tear it down and turn it into a hot rod.[1]

In order to get the car street legal, they had to use as many stock parts as possible. The original rear end and transmission were kept, but an adapter mounted the transmission to a 1946 - 1948 Ford 239 cid. flathead Ford V-8 engine.[2] Volvo disc brakes were installed up front, while more traditional 1948 Ford brakes were used in the rear. The brakes were power-operated. The original roof inset was replaced with plexiglas, and it was fit with a custom upholstery made by the two brothers. A German helmet from WWII was used as air filter, while an old grenade served as shift knob. Once the bodywork was done, the tudor was painted Sierra Gold. It was also pinstriped in white by the brothers. It roiled on 15 inch ET mags with thin white stripe tires. The build took four years, and it was completed in 1974.[1]

Before the build was completed, there were rumors on the street about the hot rod that Claus and Stig were building. It was supposed to have a chromed German helmet as an air-filter and disc brakes! In 1974 the first Hot Rod of Trondheim finally made it's appearance at Mobilia Stekhus, a hangout for car-crazy teenagers at the time.[3] This version of the Jørgensen brothers hot rod was featured in Colorod Nr 9 1974. In 1974 the car was runner up for the "Car of the Show" award at the Motormesseshow in Nidarøhallen.[1]

In 1978 the Jørgensen Hot Rod was featured in Amcar Vol. 3 - No.8 - 1978. By then, the engine had been hopped up, featuring Edmunds Custom aluminum heads and an Edelbrock 400 Jr. camshaft. The stock transmission had also been replaced with a 1939 Ford transmission. According to the story in Amcar Magazine, the brothers were working on several other ptojects, like a 1947 Dodge coupe, a 1946 Ford convertible, a 1936 Chevrolet 2-seater convertible, and another 1932 Ford Tudor.[1]

Please get in touch with us at mail@kustomrama.com if you have additional information or photos to share about Claus and Stig Jørgensen's 1932 Ford.