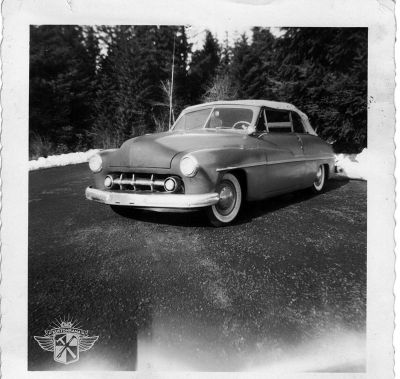 Chuck's Merc as it appeared in 1953, before Dee Wescott restyled it. This version featured a filled hood, trunk and doors, 1953 Chevrolet grill, a single spotlight and mild lowering. Photo provided by Dick Page and Chuck Traaen. 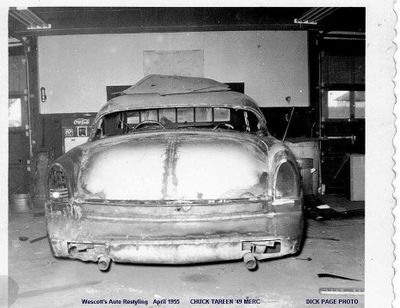 Chuck's Merc as it sat at Wescott's Auto Restyling in April of 1955. Photo courtesy of Dick Page. 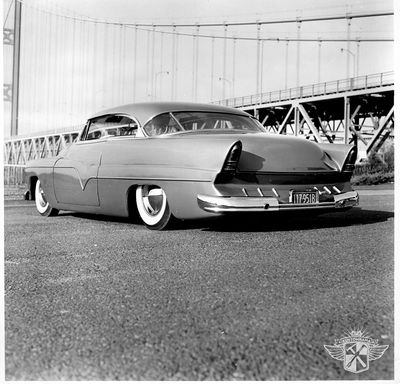 The Merc as it appeared after Dee Wescott had restyled it for Chuck. This photo is taken in front of the famous Tacoma Narrows Bridge, a favorite setting for the Tacoma Toppers members. Photo provided by Dick Page and Chuck Traaen. 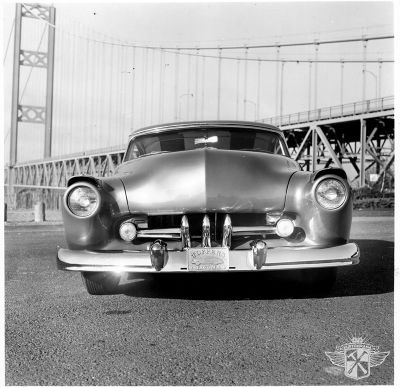 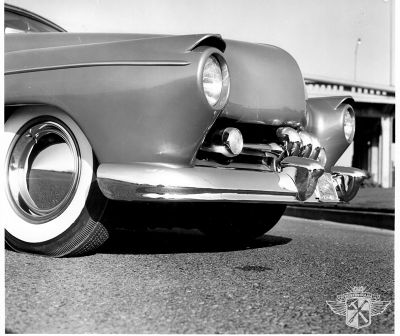 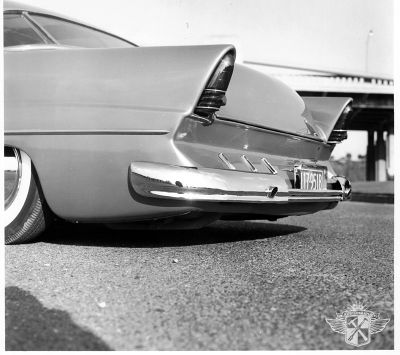 A close up showing how the 1953 Lincoln taillights were held in by chrome plated 1/4" round rod frames. Photo provided by Dick Page and Chuck Traaen. 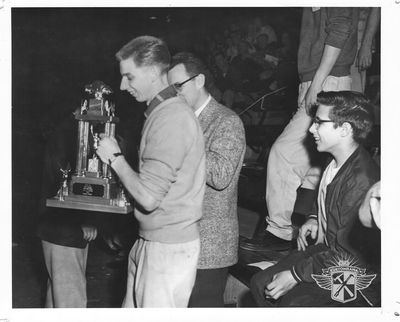 Chuck Traaen receiving one of many trophies that he won with his Merc. Photo provided by Dick Page and Chuck Traaen. 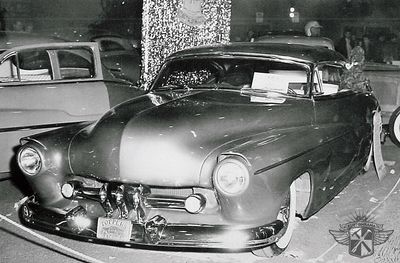 Chuck's Mercury as it appeared when it was featured in Northwest Rods and Sports Cars January - February 1958. 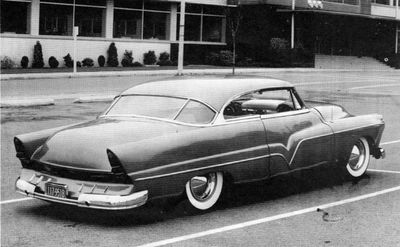 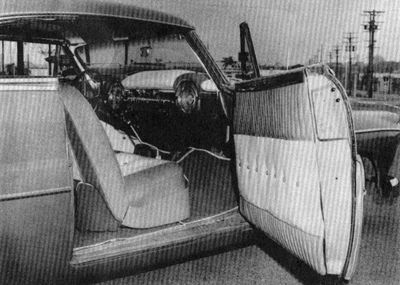 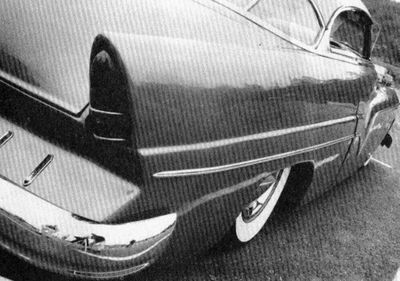 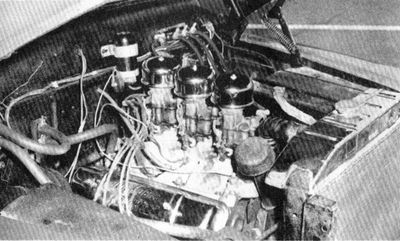 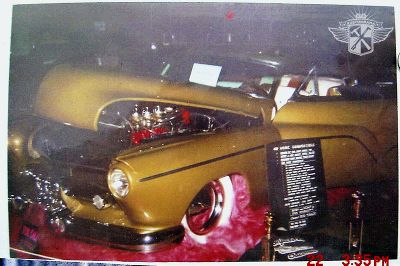 A color photo of the Merc shortly after George Taylor bought it from Rod Stacy. Photo by Dick Page. 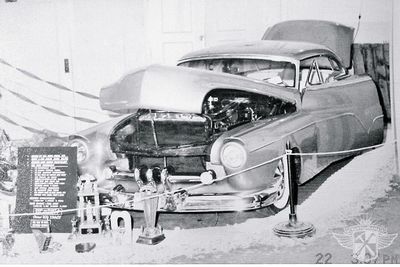 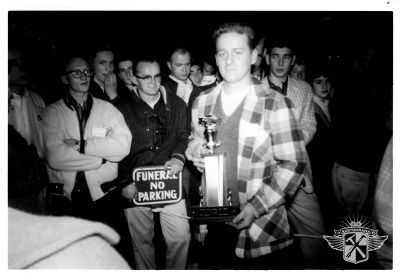 George Taylor with his first place trophy in the full custom award class taken at the 1959 Tacoma Toppers car show. Later that night an engine fire disabled the electrical doors, and when the fire department arrived and tried to chop the doors open, the fire man was tackled to the ground by Gene. Photo by Dick Page. 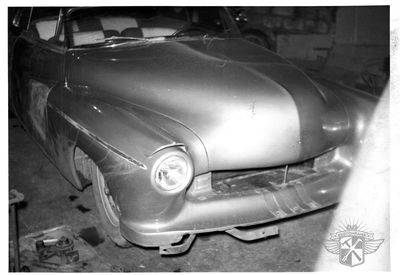 The Merc as it appeared after the engine fire. The paint damage on the driver side of the hood can be seen in this photo. Fire damage to the interior caused damage on the passenger side door as well. Photo by Dick Page. 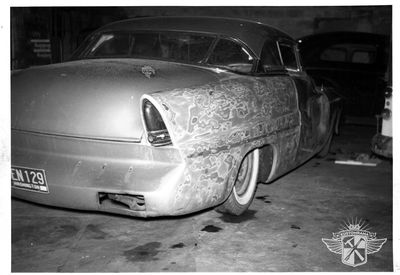 After the engine fire George, Dick Page and some other friends of George and Dick sanded and blocked the entire car to perfection. Photo by Dick Page. 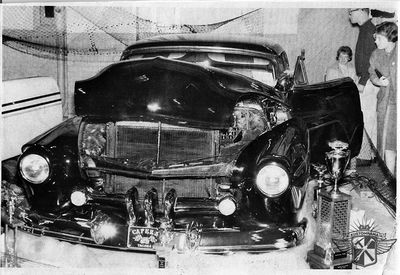 George's Merc all black at the 1960 Tacoma Toppers show in March. Photo by Dick Page. 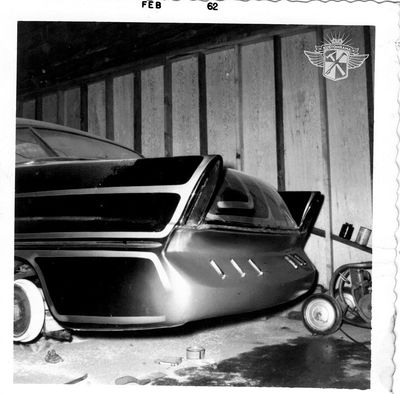 The Merc during its 4th re-do in 1962. Photo provided by Dick Page. 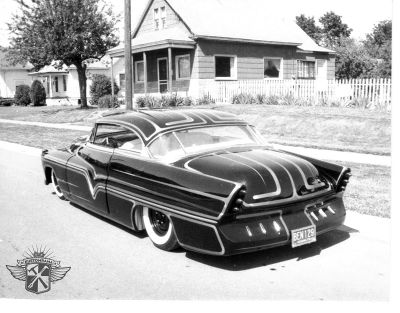 The car as it looked after Dick Page had rolled front and rear pans, and changed grille and taillights on the Merc. Photo provided by Dick Page. 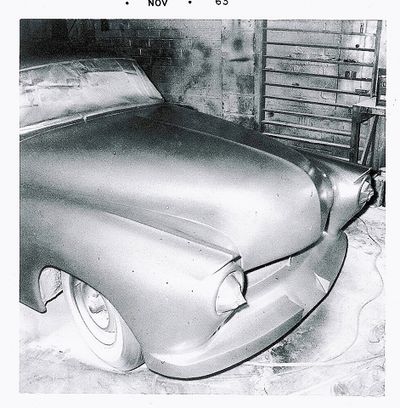 Dick Page redoing the Merc for its current owner Larry Ayes, at his first Parkland shop in 1963. Photo courtesy of Dick Page. 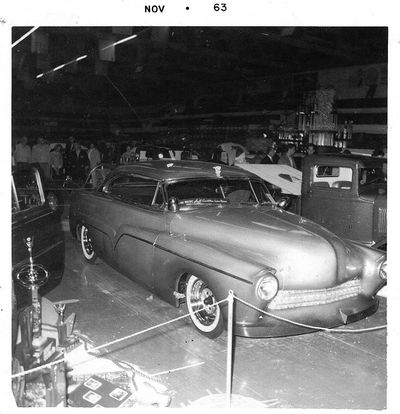 The lime green Metalflake with Diamond dust, shaded in candy green version of the Mercury that Dick Page did for Larry Ayres. Photo courtesy of Dick Page.

1949 Mercury Convertible originally owned by Tacoma Toppers member Chuck Traaen of Tacoma, Washington. Chuck's Merc was originally restyled by Dee Wescott at Wescott's Auto Restyling. Dee cut the windshield posts off and welded on a 1953 Cadillac deVille top that had been chopped 3 1/2 inches. A one piece-windshield and dash were taken from a 1953 Oldsmobile. An unusual dip was hand-formed into the sides of the car, and side trim from a 1956 Plymouth was modified to fit the new lines. The front fenders were extended 10" and scooped. The headlights were tunneled and frenched, and the nose was shaved. The stock grille was replaced by a grille that was made from 1953 DeSoto teeth with Henry J wing bars attached. A 1953 DeSoto gravel pan was frenched to the fenders. The stock bumper was kept, but Dee chopped the bumper guards. The rear fenders were extended, tunneled and modified to accept a pair of 1956 Lincoln lenses. A trunk lid from a 1949 Oldsmobile was sectioned both from top to bottom and side to side in order to fit the reworked rear fenders. A hand formed gravel pan was set off with 1955 Cadillac chrome bars. The exhaust tips were routed through and molded to the rear bumper. Inside, the interior was finished in quince and white. In order to lower the car, the frame was C'd and the driveline tunneled. Chuck's custom featured a 303 Oldsmobile engine that was equipped with a Howard cam and Thomas lifters, pushrods and rocker arms. The heads were ported and polished, and an aluminum flywheel, Edelbrock 3 pot manifold, and exhaust headers were installed.[1] After finishing the bodywork, Dee painted the Merc in a dark metallic bronze color. The color didn't do anything for the car, so it didn't take long until it was repainted lime gold with a lime green top.[2]

Chuck sold the Merc to Rod Stacy, who sold it to his cousin and Tacoma Capers member George Tyler. After George suffered an engine fire after the Toppers car show, George, Dick Page and some other friends of George sanded and blocked the entire car to perfection. Another good friend, Gordy Wells had a spray booth, and he painted the Merc black for George. The guys rubbed the paint out and reassembled the car. Bob Davidson, a childhood friend of Dick and fellow Capers member laid out scallops on the car that he sprayed in gold with red pinstriped edges. All this work, and a channel job was done with help from noted customizer and fellow Capers member Darrel Christenson. All of the work was done at the Tyler and Nelson Gas Station. Later on in 1962, Dick rolled front and rear pans for the car. He also changed the grille and taillights, and resprayed the black areas where he had done metalwork. Dick did also add scallops where that was needed. All this was done out of Dick's mom garage, and in trade for the work, George did white rolls and pleats in Dick's 1932 Ford Coupe. Dick was 17 years old at the time, and they were both poor teenagers.[2]

In 1963 Dick Page painted the car in lime green flake with candy green shading for its current owner Larry Ayres.[2]

After selling the Merc, and being seperated from it for several years, George was able to buy it back, and he is planning to restore it back to its former glory.[2]

Please get in touch with us at mail@kustomrama.com if you have additional information or photos to share about Chuck Traaen's 1949 Mercury.