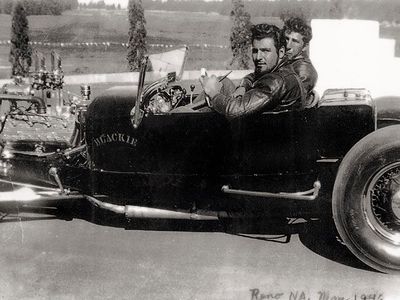 A photo of Blackie in the roadster. The photo was taken in Reno in May of 1946. His buddy Amos Torsian rides shotgun. Photo courtesy of the HAMB. 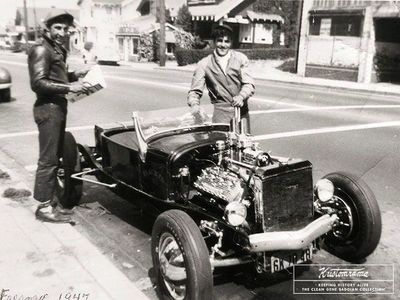 A photo of Blackie and Amos Torosian with Blackie's roadster taken in Fresno, California in 1947. Clean Gene Sadoian was 14 years old the first time he saw Blackie in his cut down black hot rod in 1948. " The driver was a scary looking guy with cut off t-shirt sleeves. He looked at me and smiled. I saw gold leaf letters on the side of car—"Blackie". He did a burn out for me, I was forever hooked." Photo from The Clean Gene Sadoian Collection. 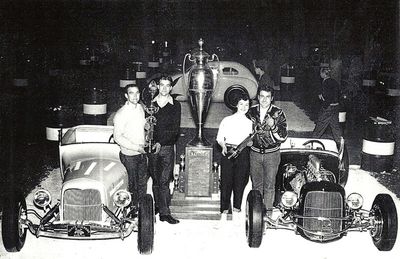 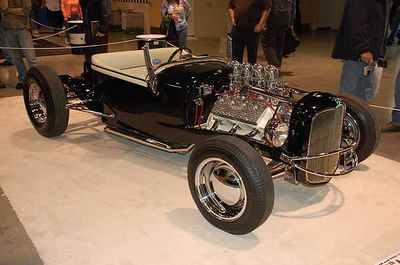 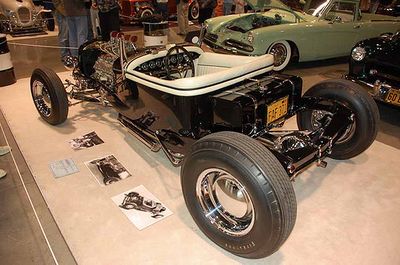 1926 Ford Roadster built by Blackie Gejeian of Fresno, California. The windshield was chopped and all running gear and engine were chromed. The roadster sported a Mercury mill with Edelbrock heads and four carburetors. The interior was done in white Naugahyde upholstery with bucket seats.[3]

Gene "Clean Gene" Sadoian was a local Fresno teenager who in 1948 spent his weekly allowance of $.25 cents on a new monthly magazine called Hot Rod Magazine. "In the 7th grade we had one hour of study hall," he told Kustomrama in February of 2021. "I put the magazine inside of my books and read about Fran Hernandez, Barney Navarro, and Bill Burke, building and racing on the salt, dirt and oval tracks. Hot Rodders had a bad image, so we had to hide images just as porno is now considered. Wally Parks wrote articles about illegal street racing, encouraging legal dragstrips and working with the police." At age 14, while delivering Fresno Bee newspapers on his chromed up Schwinn bike, Gene heard a loud rumble. "Like I never heard before. I saw this cut down hot rod, black with two carburetors sitting so high they blocked the drivers view. The driver was a scary looking guy with cut off t-shirt sleeves. He looked at me and smiled. I saw gold leaf letters on the side of car—"Blackie". He did a burn out for me, I was forever hooked. The next day, I told my school mate buddy, Richard Shirinian, about it. He said that’s my cousin Blackie, I will take you out to his farm. Richard was the only one in Jr high with a car (38 2 door ford). When we arrived at Blackies farm on East Ave. he was working on his roadster. I started looking at the roadster when Blackie handed me a rag and a can of Brilliant Shine polish. I was in heaven seeing how it was put together while polishing the chrome rear end. I noticed his taillight wiring was covered with wired spiral metal. I studied his motor, and everything in the cramped interior. As we were ready to leave, Blackie jumped in the driver’s seat of Richard’s Ford, told us to get into the back seat? He took off dirt tracking in circles, then over irrigation furrows. Richard and I were trying to lay flat since we were hitting the ceiling. Finally I poked Richard, told him we should stop yelling maybe he would stop. Blackie’s last maneuver took out three rows of his fathers staked and wired grapevines. With that, we saw Blackies father running after us with a shovel. Blackie jumped out and started running with his father after him in hot pursuit. Richard and I jumped in the car and took off. Blackie never went home that evening."[4]

Please get in touch with us at mail@kustomrama.com if you have additional information or photos to share about Blackie Gejeian's 1926 Ford.