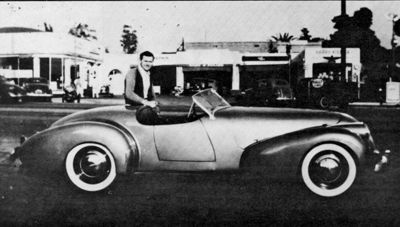 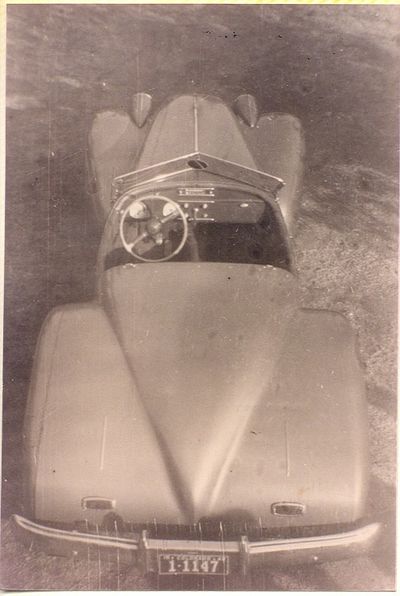 This photo of the Bill Huges' Roadster was published in Rods and Customs May 1953. 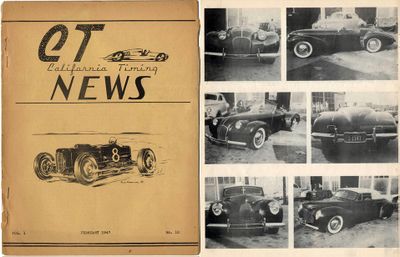 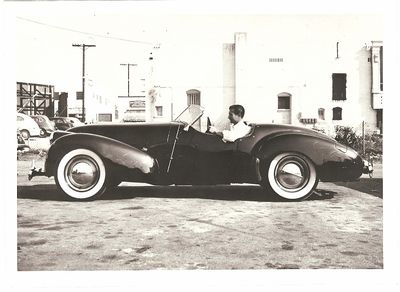 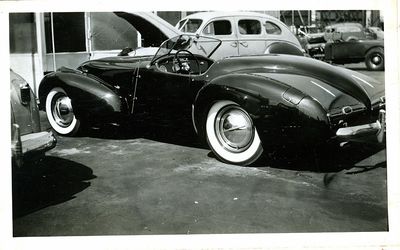 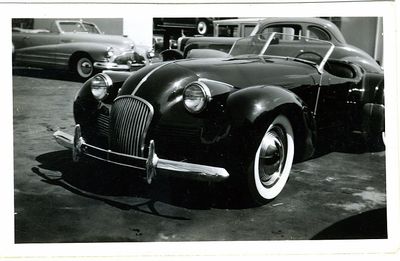 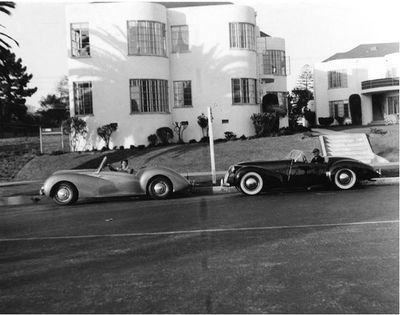 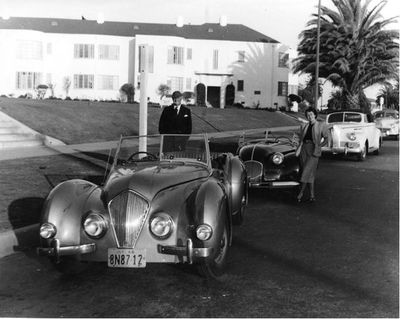 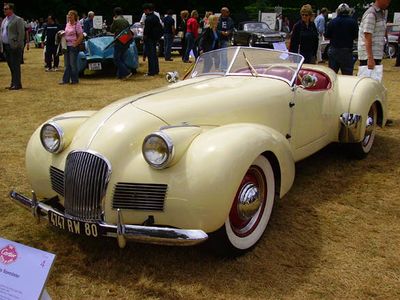 The car as it looked after Jean-Pierre Leclerq had restored it in the 1980s.[1]

The Bill Hughes roadster is a hand made roadster built by Frank Kurtis for Denver, Colorado Ford dealer Bill Hughes. Bill owned one of the ill-fated Miller-Ford front-wheel-drive racers which were a highlight of the 1935 Indianapolis 500.[2] The original Miller-Ford V-8 engines, hopped up by Ford, had high compression aluminum heads, high-lift Winfield cams, and four Winfield carburetors on a special manifold. Bill bought one of the cars in 1939, and had Kurtis narrow it from its original two-man configuration to a single-seater. Kurtis did also stuff an Offenhauser engine in it, and Bill went racing at Indianapolis with it. With an extra engine on his hands, Hughes asked Kurtis to build a sports car around the Miller-Ford engine in 1939. Working out of his South San Pedro Boulevard shop, Kurtis based the build on a shortened 1934 Ford frame. Running gear from a 1939 Ford was installed in order to take advantage of the hydraulic brakes that had been introduced earlier that year. Frank built a framework of steel angle iron material, over which he formed a hand-made body that utilized modified Chevrolet fenders. The top on the car folded into a recess behind the seat. The car had no trunk, and the spare tire slid into a storage area accessible from inside the car. The car was the first creation to carry the Kurtis-Kraft logo, and according to Frank, he charged Hughes $800 for the job.[3]

Bill Kenz detuned the engine for street use, and Hughes drove it throughout World War II. In 1947 Hughes returned the car to Los Angeles, and Popular Mechanics did a cover story on it. In 1947, four photos of the car, taken by Veda Orr outside Jimmy Summers Hollywood shop were published in California Timing News February 1947. According to the caption, the car was currently owned by Jimmy Summers. At that time, the car had been painted Maroon, and the Miller Front-drive engine had been replaced by a stock engine. The caption could further inform that Kurtis claimed to have clocked the car at 124.00 mph on a 4-mile stretch on a trip from California to Colorado.[4] Some time after that, Mrs. Richard Winton bought the car and drove it in California. After a while, she and her husband moved to Tangiers, Morocco. They brought the car with them when they moved. The Wintons sold the car in Morocco, and the old Kurtis creation went through several hands until it needed repairs that the owners could not afford. The car was left in storage.[3] In 1979, Frank Kurtis received a letter from a Leclerc in Morocco, Africa that contained photos showing the car as it currently sat.[2] Jean-Pierre Leclerq, a French schoolteacher and car collector had found the car in 1975. Unaware of its story, he had repaired the Mercury engine that it now was powered by and started to do a research on the origins of the car. He traced it back to Frank Kurtis, who was still living in Glendale. The old custom was still driveable once the engine was fired up, so Leclerq drove it from Casablanca to the ferry at the Straits of Gibraltar, up through Spain, across the Pyrenees mountains, and through southern France to Aachen, Germany. He showed it at car meets in Germany, before driving it to Normandy on the coast of France. The original Indy Ford engine was long gone, and so were the Moon hubcaps, most of the instruments, and various other parts. Leclerq went on to undertake a frame-off restoration of the car.[3]

Please get in touch with us at mail@kustomrama.com if you have additional information or photos to share about Bill Hughes' Roadster.