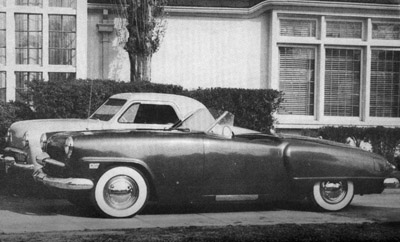 In an attempt to get into the youth market, Ford Motor Company teamed up with AMT to launch the "Custom Car Caravan" in 1962. Together they wanted to create and campaign customized and performance-themed Fords. Or, as Ed Roth described it in his book, "making sure all of Ford's stuff was in the car shows around the country." The first cars were built in-house, but it didn't take long before Ford started to commission famous customizers such as George Barris, the Alexander Brothers, Bill Cushenbery, and Gene Winfield to dream up and execute life-size Ford customs. Featured on the cover of Custom Rodder July 1963 is the 1963 Ford Falcon Coyote, an asymmetric themed custom by Vince Gardner.

Vincent E. Gardener was born in South Bend, Indiana. Vince began his career as an automobile designer by winning GM's Fisher Body Craftsman Guild while still attending high school in Duluth, Minnesota. The intricate Napoleonic coach replica he built helped Gardner win a job in Gordon Buehrig's small design department at the Auburn Automobile Company. When the Cord 810 the team was working on turned out to be one of the most stunning designs in automotive history, this 23-year-old clay modeler's reputation took flight. From there, he moved on to Briggs Manufacturing as a draftsman, then to Budd Manufacturing, where he started as a model builder and worked his way up to chief designer in the space of one year. In 1943 Vincent joined Studebaker as a designer working under Raymond Loewey. In 1947, while working for Studebaker, Vince bought a brand new 1947 Studebaker Champion three-passenger coupe off the assembly line. He took the car home, tore it down, and made a sportster out of it known as the Gardner Special. The Garnder Special was featured in several magazines at the time, and even took home the Most Magnificent Custom Roadster award at the 1950 National Roadster Show in Oakland.

Vincent worked for Studebaker until 1951. In 1951 he left his job and worked as a free-lance automobile and industrial designer out of his office in South Bend, Indiana.[1] Later the same year, he moved to California to design and build his own sports cars. Vince had recently won a Motor Trend and Ford Motor Company design contest with his Vencent E. Gardner's Vega, and decided to move to California in order to build it. His plan was to someday manufacture a fiberglass car body which he could sell in kit for about $1,000. That never happened partly because the Ford Motor Company took an interest in the Vega and summoned it back to Dearborn to help celebrate the firm's 50th anniversary.

Gardner is credited with singlehandedly designing the line of 1956 Studebakers in a rented warehouse. And he competed against four other teams in a competition established to design the 1956 Lincoln Continental Mark II.

In 1963Vincent worked for the Dearborn Steel Tubing, and designed the Coyote for the Ford Custom Car Caravan. The Coyote was a two-seater roadster 1963 Ford Falcon that had been shortened 18 inches. The car featured shaved trim, custom wheels, and radiused wheelwells.The car was painted in a candy lime lacquer by the Alexander Brothers.

Gardner's last design project was a neo-classic (Bentleyesque coachwork over a modern driveline) commissioned by firearms magnate Bill Ruger. The only details of his demise are that he asphyxiated himself in a friend's Auburn, Indiana garage in the spring of 1976.

Please get in touch with us at mail@kustomrama.com if you have additional information or photos to share about Vincent E. Gardner.