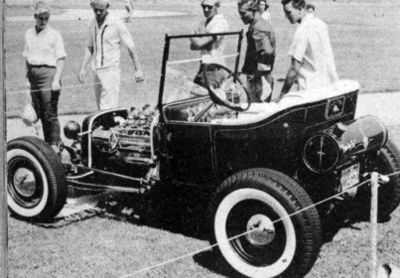 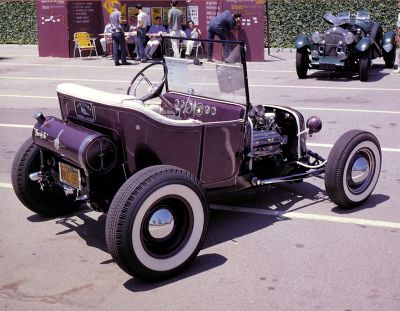 Photo taken at the 1960 LA Roadster Show at the Hollywood Bowl while Bob Johnston owned it. Photo by George Barris 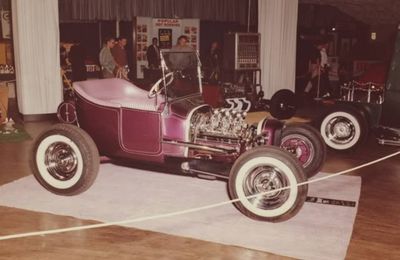 The car at Mickey Thompson's The World of Speed at Shrine Auditorium in Los Angeles, December 1962.[1] 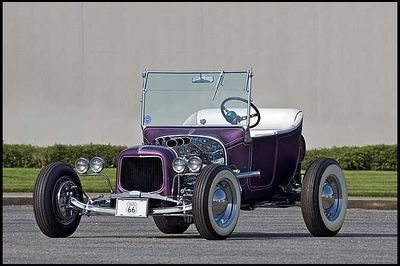 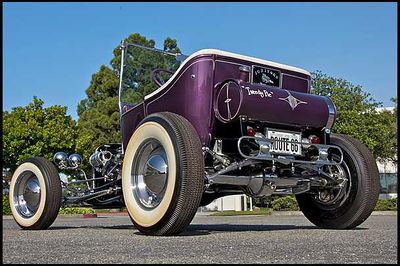 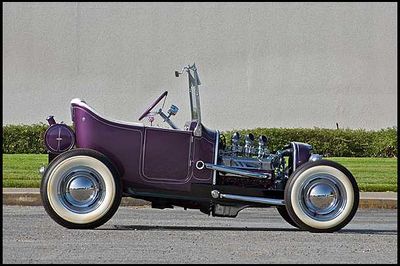 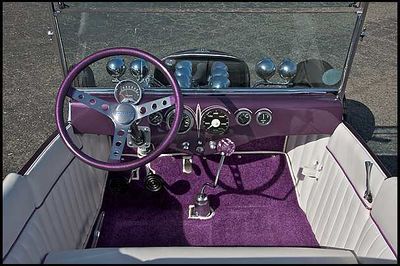 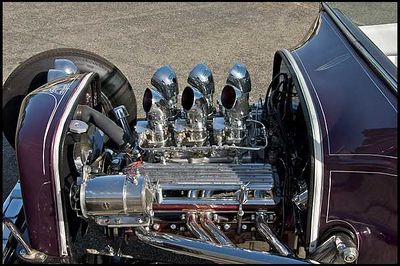 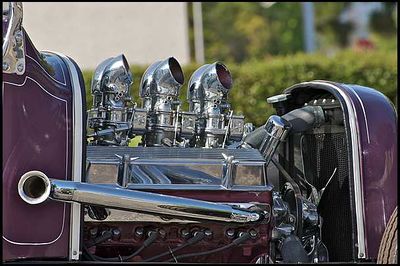 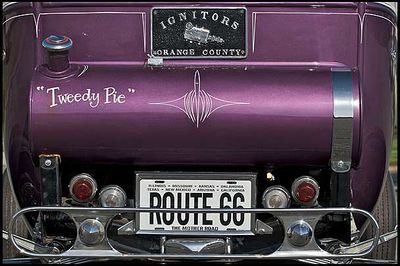 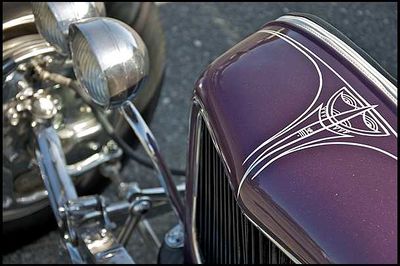 Tweedy Pie is a 1923 Ford Model T Roadster originally owned and built by Orange County Ignitors member James Robert Johnston aka Bob Johnston of Anaheim, California between 1954 and 1956. Bob widened the body of the car 3 inches, before he channeled it over bobbed 1932 Ford frame rails.[2] The wheelbase on the altered deuce frame was reduced to 84 inches.[3] Bob was a instrument mechanic at one of the local airplane factories, so according to Ed Roth who later bought the car from Bob, the car was fit with "the best gauges known to man".[4] The gas tank on the car was from a 1941 Willys. Once the bodywork was done, the car was painted in a one off mix, copied from a Union 76 oil called Royal Triton Purple. The car was painted with more then 40 coats of lacquer using a vacuum cleaner. Bob's nephew Dick Johnston painted the car in Bob's garage in Bellflower, were he lived before he moved to Anaheim. Dick also did a lot of the metal work on the car.[2] Bob's roadster was upholstered by Lee Garofolo of Lee's Golden Needle in Garden Grove, California.[5] In 1958, a couple of years after the car was finished, Bob had Ed Roth pinstripe the car.[2]

September 5th, 1959 the Tweedy Pie won the "Best Roadster" award at the first and last Disneyland Car Club Day and Autocade. Later the same year it was also featured on the cover of Rodding and Re-styling December 1959.[6] Photos from theDisneyland Car Club Day and Autocade shows that Bob by then had swapped the flathead in the Tweedy Pie for a 1957 Chevrolet Corvette engine with a single four-barrel carb. Wanting to keep the car up to date and fresh for the next show season Bob decided that it was time to upgrade the car. In order to show the Tweedy Pie at different shows, Bob had to belong to a club. He was not member of any club, and decided to make up his own club called the Orange County Ignitors in order to show off his creation. While Bob owned the car he was contacted by the producers behind the 77 Sunset Strip TV series. Before they decided to use Norm Grabowski's Lightning Bug, they wanted to use the "Tweedy Pie". The contract was sewed up, but Bob backed out at the last minute because he did not want anyone else to drive his beloved car.[2]

In 1962 Bob sold the Tweedy Pie to Ed "Big Daddy" Roth.[2] As the royalties from the Outlaw model started to roll in on Ed's account, and the Ed Roth business was picking up, Ed spent more time at meetings and car shows, and less time in the garage building his show rods. He had met Bob Johnston while going to car shows with the Little Jewel and the Outlaw, and really liked his little T-bucket.[4] Ed made Bob a deal he couldn't refuse, and the Tweedy Pie swapped hands for $1150.00 USD. Bob's stepson Eric W. Johnston remembers that Ed handed Bob a certified check on Revell's account. According to the book "Hot Rods by Ed "Big Daddy" Roth" the car sold for $1500.00 USD, but this is wrong according to Eric. Before selling the car to Ed, the engine was fit with a polished Offenhauser manifold that sported six Stromberg 97's. While building the linkage for the carburetors, Bob destroyed a set of axles, due to the weak point of the rear axles. Afraid of destroying more axles, Bob built the the setup so it only had about half throttle. Bob also chromed the rear end center housing on the car before he sold the car. Bob decided not to chrome the axle tubes as he was afraid of embrittlement.[2] The first thing Ed did to the car was to fit it with dual headlights and a set of chromed reversed wheels with Baby Moons.[4] Ed has also been credited for the rear nerf-bars, but according to Bob's stepson, Bob fit the car with nerf-bars in the rear before selling it to Ed Roth as part of his periodic updates on the car. The new build was introduced to the world in Rod & Custom March 1962. Revell Models produced a 1:25th scale model kit of the car, which sold 3.5 million copies in its first year and has totaled over 11 million to date.[6]

Ed Roth sold the Tweedy Pie to Chris Lovoy after owning it for a couple of years. Chris made his own modifications to the car, adding rear fenders and other things to the car.[4] The car was later sold to Larry Tarantolo of Custer Park, Illinois, who restored it back to the way it sat when Ed Roth owned it.[3]

Please get in touch with us at mail@kustomrama.com if you have additional information or photos to share about Tweedy Pie.