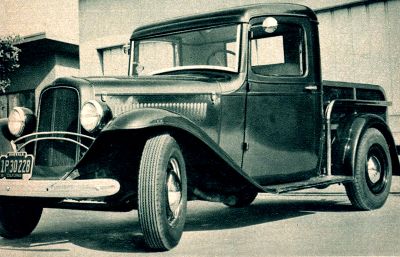 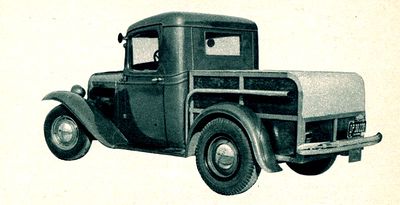 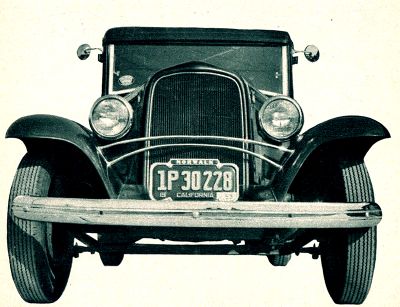 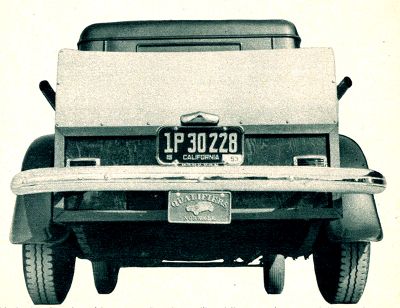 1932 Chevrolet owned and built by Long Beach Qualifiers member Tom Logan of Long Beach, California in 1950. After the war was over, Tom began searching for transportation. In 1946 he aquired a 1932 Chevrolet Sedan which was well fit for Tom’s easy going requirements. It served faithfully for several years before going into gradual retirement. In 1950, Tom converted the tired sedan into a pickup in use for hauling trash from his home to the dump. Tom operated Hall’s Auto Parts a few miles away from Long Beach in Norwalk, so mechanical work was nothing new for him.[1]

He stripped the car down to its bare frame rails. He wanted to use a 1936 Chevrolet Master rear end with 4:1 ratio, to do this he had to cut the frame in three sections and widening it 7 inches to meet the 36’s longitudinal springs. The driveshaft and housing had to be shortened to meet the 1948 Chevrolet transmission that was used. The front end arrangement was cleaned and rebuilt. The car was fit with juice brakes from a 1936 Ford, and were expanded by a Ford F6 truck master cylinder. 1948 Chevrolet truck wheels were installed with 6.00-16 tires up front and 6.50-16 six ply in the rear. A 1936 Chevrolet pickup car was channeled 9 inches until it finally met the 1932 Chevy running boards and fenders. A 1932 Ford grille shell and surround was installed as well, housing a 1936 Chevrolet radiator. No decent bed was avalible, so Tom constructed his own. He used ¾ plywood for the sides, trimmed similar to a station wagon. Bumpers from a 1939 Mercury was installed to achieve a modern look. A three piece hood was formed by hand from 22 gauge sheet metal and louvered for cooling and appearance. Seal beam lights were installed along with Kaizer taillights. Fellow Qualifiers member Bart Root painted the car Saturn Gold Metallic for Tom.[1]

Another fellow member of the club, Don Hudson, operated of Don’s Trim Shop, sewed a nice interior of piped and rolled Pearl Grey Tolex with black carpets. He also added white tarpaulin for the bed. Larry Weaver, an old pipe line welder, tore into the stovebolt six with its bore and stroke 3.750” and 3.415”, making it to a 200 cubic inch engine. Silvolite pistons and a Weber Super Grind was selected for the stick. The head was ported and polished and milled a quarter inch to give it a compression ratio of ten to one. Larry fabricated the intake manifold from seamless tubing, which distributed three Bosch downdraft carburetors. Larry constructed the headers and exhaust system as well, which was routed up through the running boards and over the rear fenders.. GMC ignition was installed to secure enough sparks. The flywheel was chopped and was connected to a 1936 Chevrolet clutch. Tom had a total cash outlay on the car of $371.[1]

Please get in touch with us at mail@kustomrama.com if you have additional information or photos to share about Tom Logan's 1932 Chevrolet.