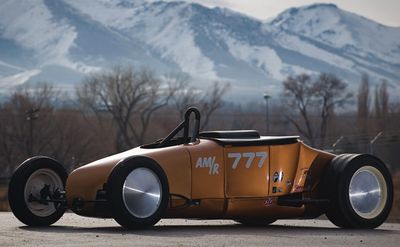 American straight-line speed competitions began on the dry lakes of the Mojave Desert as early as the 1920s. While racers stripped their cars to reduce weight and wind resistance, stock-bodied cars still had the aerodynamic qualities of a brick! Soon, however, creative experimentation led to a number of highly modified rear-engine cars with streamlined nose cones that began setting records at the dry lakes and on the Bonneville salt.

By the 1950s, this inventiveness naturally translated to the new sport of sanctioned drag racing and rear-engine cars quickly became the norm in several classes. The venerable flathead V8 was abandoned when the new lightweight overhead valve V8 engines became readily available. The first Buick V8, nicknamed “Nailhead” for its unique valve placement, appeared in 1953 and was a winner right away, courtesy of its high-compression design and responsiveness to racing modifications.

Tom Hensley of Phoenix, Arizona created this historic A/Modified Roadster with just such a Buick mill between 1954 and 1955. This iconic racing machine reads like a blueprint for a successful 1950s drag racer – rear-engine, custom tubular chassis, Model T steel body with sleek “anteater” nose and a highly modified Buick Nailhead V8 engine hooked to a Halibrand quick-change rear end. Tom raced this car well into the 1960s, winning first in the A/Modified Roadster class at Mel Larson’s Phoenix Raceway, which netted him a trophy and an award jacket, both of which accompany the sale of this car, in addition to other trophies. When Tom Hensley passed away, his son inherited the car and eventually sold it to family friend Bill Shaw. The car passed through another owner before its most recent acquisition.

Nicely restored, the roadster is now powered by a 401 cubib inch 1960 Buick Nailhead engine, which was blueprinted and equipped with many vintage speed parts, including six Stromberg 97 carburetors on a Drag Star Manifold. The driveline includes a Schieffer flywheel, Zoom clutch, modified Ford three-speed manual transmission and a Halibrand quick-change rear end, while braking is provided by drum brakes at the rear. Other period features include Moon spun aluminum wheel covers, gauges and an engine valley cover, a fuel cut-off valve and filter from a B-17 Bomber, extra quick-change gears, and a rear drum brake tool are included.[1]

Please get in touch with us at mail@kustomrama.com if you have additional information or photos to share about Tom Hensley's 1926 Ford.