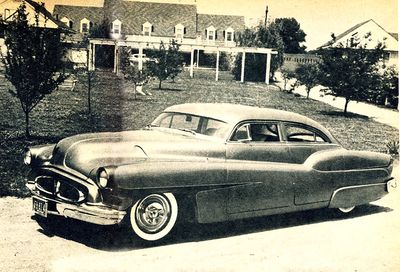 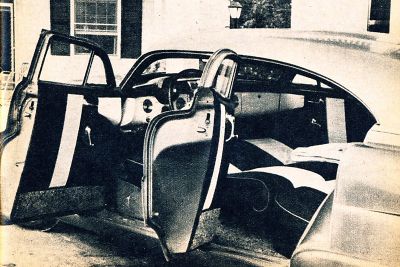 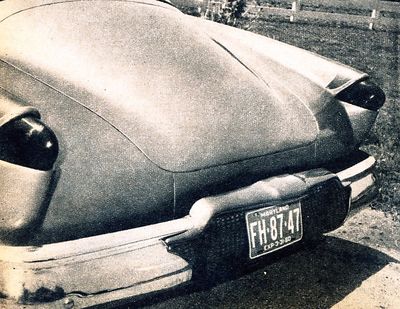 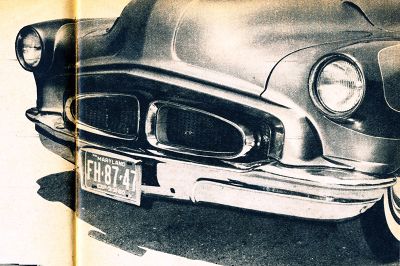 1950 Buick 4-door sedan owned and restyled by Tom Brooks of White Marsh, Maryland in a spawn of 18 months. Tom was not satisfied with the original "body by Fisher", so he decided to restyle his car so he would like it. He removed all the door handles, nosed and decked the car to achieve a cleaner appearance. Scoops were made on each sides of the hood, and the headlights were slightly tunneled and frenched by using Ford rings. The front end was also fit with a 1956 Buick front bumper, and the custom grille shell featured two 1957 Edsel chrome grille frames that were mounted horizontally with mesh screen backing. The rear fenders were reworked to accept 1954 or 1955 Packard Clipper taillights. The rear bumper was reworked, with mesh screen in the center with custom license guard. A Studebaker pan was used beneath the bumper. Tom also re-contoured the deck lid. The top was chopped as well, approximately 5 inches. The windshield was a one-piece unit. The interior was done in black and white Naugahyde with gray rug material. The seats were modified to permit folding them backward. It was lowered 6 inches by altering the coil spring suspension. Mercury fender skirts were also installed.[1]

Please get in touch with us at mail@kustomrama.com if you have additional information or photos to share about Tom Brooks' 1950 Buick.