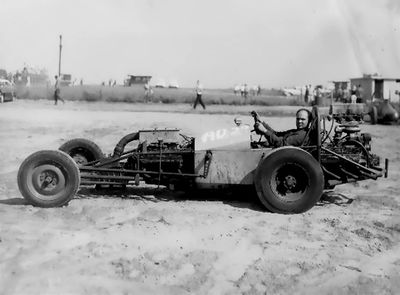 Photo courtesy of Two To Go!.

Twin engine dragster built and raced by Knucklebusters of Springfield member Stan Lomelino of Springfield, Illinois. Fellow Knucklebusters member Jim Delaney built the rear engine on Stan's dragster. In 2015 Jim told Kustomrama that the engine was a 283 cu. in. engine that was balanced by Granatelli in Chicago; "It was ported and relieved in my basement over the winter of 1955 - 1956. It featured an Iskenderian 404 cam, an aluminum flywheel, and Evans heads. Stan ran it with a supercharger, so it probably was producing a bit over 200 hp in the dragster. Having finished it in the spring of 1956, I intended it for a 1934 Ford 4-door. But then I had a chance to pick up an new Chevrolet V8, and Stan was looking for a second engine. I sold the engine and Ford for money to get the Chevrolet, which I put in a steel rail made from a 1939 Ford frame cut to 100 inch wheelbase. It features some airplane parts, a wing tank and aluminum bucket seats. It also ran Indy-tires, retrieved after time trials. With driver, the whole thing weighted under 1200 pounds and was dismayingly quick for a street rod in 1956. Then I got drafted, came out and went to college and a career of something other than cars. A common story for young guys in the cold was period."[1]

Please get in touch with us at mail@kustomrama.com if you have additional information or photos to share about The Stan Lomelino Twin.