From Kustomrama
(Redirected from The Mysterion)
Jump to: navigation, search 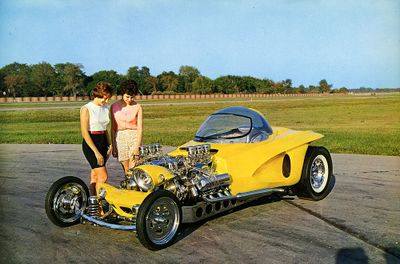 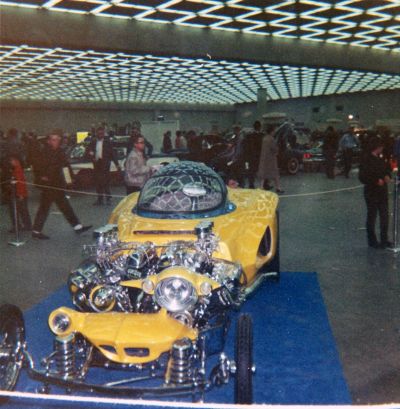 The Mysterion at the 1964 Detroit Autorama. Photo from The HAMB. 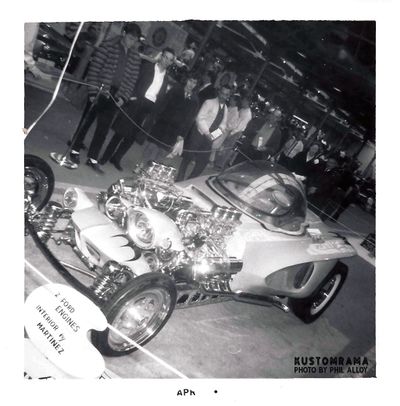 A photo of the Mysterion, taken at an indoor car show in Toledo, Ohio in 1965. This version had been dressed up featuring subtle scallops. Photo from the Phil Alloy Photo Collection. 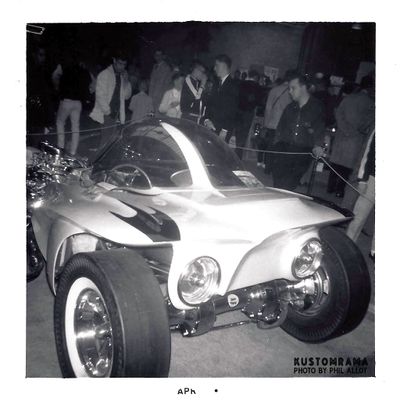 A rear end shot of the Mysterion from the Toledo, Ohio 1965 car show. Photo from the Phil Alloy Photo Collection.

The Mysterion is a bubbletop show rod built by Ed "Big Daddy" Roth of Maywood, California. Ed got the idea for the Mysterion from the dragsters, as they were poppin' up with two, three and four engines. Bud Anderson, who was in charge of Ford's Custom Car Caravan donated three brand new Ford engines to the project. Ed started with the frame, before he made the front of the grille with the offset lights. According to the book "Hot Rods by Ed Big Daddy Roth," that turned him on so much that he was able to finish the rest real easy. Hydraulics were used to open and close the bubble top, and to adjust the height of the rear suspension. Larry Watson of Watson's House of Style painted the car Candy Yellow.[1] The build was completed in 1963, and it was featured in full color on the cover of Rod & Custom September 1963.

Ed took the Mysterion to a lot of show, before he decided to rent it out to car show promoter Bob Larivee. While Larivee was hauling the car around to shows, he notcied that the frame had started to crack. He took the engines apart and removed the crankshafts and pistons. He then called Ed to tell him about the damage. Ed told Larivee to pay him for the damage, and that he would pick it up. That never happened, and it ended up in some guys garage in Tulsa. Doug Wright came across what was left of the Mysterion alongside a wall inside Ray Farhner's shop in Raytown, Missouri. Ray informed Doug that Promotions, Inc. had finished touring the car, and knowing it was broken and in mess, Roth was no longer interested in it. Ed had asked Larivee to remove both front and rear axles and wheels and ship them back to Maywood. He didn't care about what happened to the rest, so Ray was going to part it out. Doug made a deal with Ray, and he bought the remains for $750.[1]

There was no title with the car, and Roth required Doug to sign a legal contract stating that he could not use the name Mysterion of the name Ed Roth in connection with the car. Doug wanted to restore the car and get it back on the road. That never happened, and after three years his parents demanded him to get the car out of the basement. Nobody wanted to buy it, so Doug had to part it out. The last to sell was the body and frame, which went to a man who owned a body shop in Independence, Missouri.[1]

Please get in touch with us at mail@kustomrama.com if you have additional information or photos to share about Ed Roth's Mysterion.