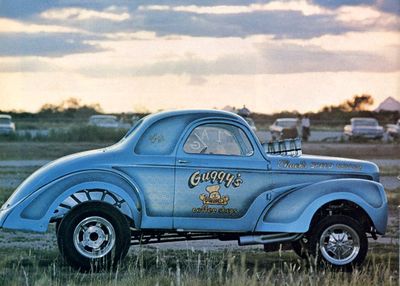 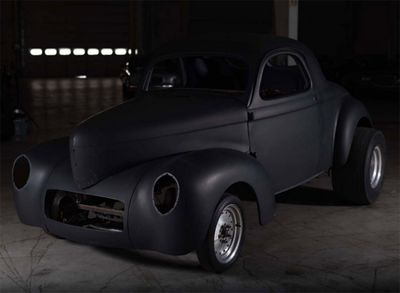 The gasser as it appeared when it was advertised for sale by Dan Morphy Auctions May 16, 2015. Photo courtesy of Live Auctioneers. 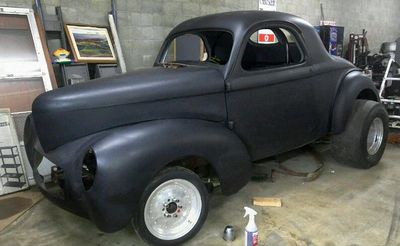 In March of 2016 the WIllys was advertised for sale on eBay. Photo courtesy eBay - 1941 Willys Gasser.

1941 Willys coupe campaigned by Gill Guggisburg, Chuck Forstie, Mike Helton and Larry Chek of Phoenix, Arizona. The car competed in the A/Gas class, and the team built it with intentions of setting a new record in the A/G class, as well as having a beautiful detailed strip machine.[1]

Gill headed the group and handled the driving chores. Chuck's shop, Chuck's Speed Center in Phoenix, was responsible for building the entire car, including the chassis, engine and transmission.[1]

The car was powered by a Chevrolet 427 V-8 engine from a 1966 Chevrolet. It maintained stock cubic inch measurements, and with the exception of the cam and valve mechanism, factory Chevrolet parts were retained. Steel rods were mounted with TRW aluminum pistons. A set of Ramco moly rings kept the compression ratio at 12.5:1. Crower Cams Co came up with the mechanism for the valve operation. Everything, except for the valves themselves, were made by Crower. The valves were made by the Joe Mondello. Joe also did a port and polish job on the heads. A Hilborn fuel injection was installed on the engine. The fuel injection worked in conjunction with a cam-driven Hilborn fuel pump. A set of 12 inch ram tubes were mounted above the injectors. Below was a Hilborn intake manifold. A Moon spun-aluminum tank was mounted ahead of the engine to carry the load of gasoline. The capacity of the tank was 3 1/2 gallons. The headers were built at Chuck's shop. A Mallory Super Mag provided spark to the plugs. The engine was put to test on a dyno, where it was found to produce 600 hp. The engine was hooked to a Torqueflite transmission from a 1964 Chrysler. The transmission was beefed for competition and fitted with a pushbutton shifter. The adapter between the engine and transmission was made by B & M Automotive. For driver's safety, the transmission was strapped in a Simpson flexible nylon shield. The rear end consisted of 4.5:1 Olds gears with Olds flanged axles.[1]

Spindles from a 1940 Willys were fitted to the ends of the axle. Up front it ran polished Halibrand mags with 4" wide Pirelli tires. In the rear it ran coil-springs. Chuck's fabricated traction bars, and installed a Watts linkage for anti-sway. Stock Pontiac drums and shoes were used in the rear. The car did only run brakes in the rear. The brakes were mounted inside 8-inch wide Halibrand wheels that ran a set of 10.50 x 15 slicks from M & H. The tires were inflated to only 8 psi for better grip. The low tire pressure eliminated the need for extra weight in the rear of the car.[1]

The base shell of the car was steel. The front end, fenders, doors, deck lid and hood were fiberglass parts obtained by Cal Automotive in California. The car upped the scales at 2,015 pounds. George Cerney Jr. gave the car a two-tone Pearl Blue paint job. It was silhouetted with a Gold lace pattern, and lettered in 24-karat gold leaf. The lettering and artwork was applied by Tom Kelly.[1]

Once completed, the Guggy's Gasser was featured in Dragstrip Magazine. According to the featured story, the car had elapsed times in the mid-ten-seconds range by then.[1]

Please get in touch with us at mail@kustomrama.com if you have additional information or photos to share about The Guggy's Willys Gasser.