Tommy Ivo's 1952 Buick Super. This was Tommy's first car, and he bought it when he was 16 years old. 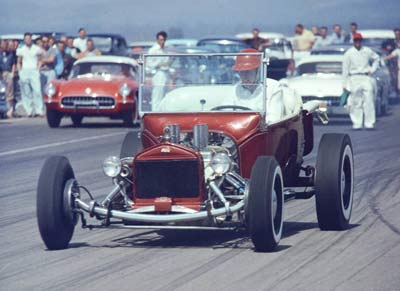 Tommy Ivo's 1925 Ford Model T-Bucket. Tommy began building the car after seeing Norm Grabowski's 1922 Ford Model T-Bucket. He asked Norm if he would let him take some measurements off his car. Norm told him to fuck off, so Ivo took action on his own, and snuck into Grabowski’s garage so he could take all the critical measurements necessary to build his own version. The build was completed in 1956. 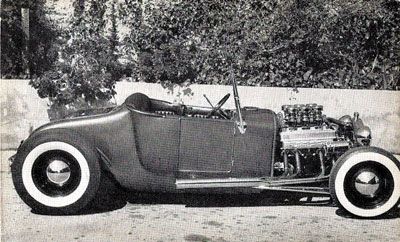 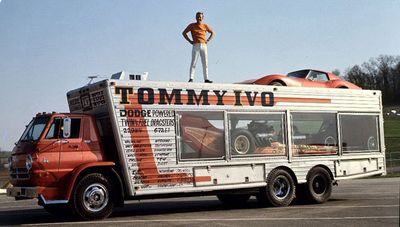 Tommy on top of one of his haulers. Photo courtesy of Just a Car Guy.

Tommy Ivo is a famous Hollywood actor, racer, and builder. He is also known as "TV Tommy," and has appeared in more than 200 TV shows.

Tommy was born in Denver, Colorado in 1936. His mother had him tap dance from the time he could walk, and he enjoyed great success in local talent shows. The cold weather caused his mother, who had sever arthritis, to move to Burbank, California.[1]

As a kid, Ivo was interested in anything mechanical in addition to the tap dancing. He disassembled his parents' clocks and watches and put them together again. He took apart his bicycle and built aviaries and clubhouses in his backyard.[1]

Tommy was soon pushed deeper into showbiz and at age seven entertaining at a variety of talent shows all over the Los Angeles area, where he got a part in a movie called Earl Carrol’s Vanities. Like many a movie star story, a producer spotted Tommy and he was picked for his first movie—the first of more than 100 which included "Tarzan" and the legendary "Rebel Without a Cause" with James Dean.[2] Tommy went on to appear in more than 200 TV shows, including a recurring role on the “Donna Reed Show” as well as a staring part on the “Margie” TV series.

By the time he was 16, Tommy had stashed enough money to buy a brand new 1952 Buick Super two-door hardtop.[2] After collecting a bunch of car brochures, Tommy and his girlfriend Nancy, decided that the Buick looked best, so he bought a bright-red Super for $3,000 while on a family vacation in Denver in the late summer of 1952.[1]

Tommy was a member of the Road Kings of Burbank car club.

Please get in touch with us at mail@kustomrama.com if you have additional information or photos to share about Tommy Ivo.