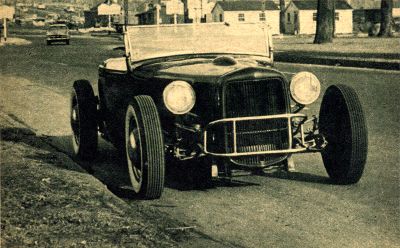 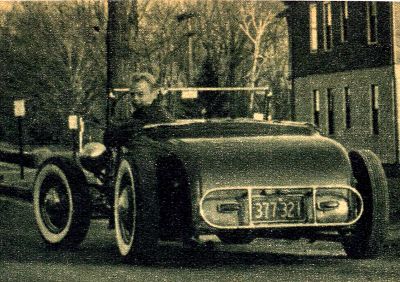 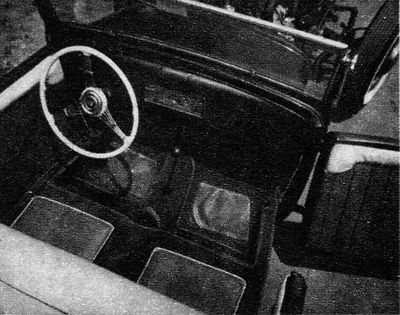 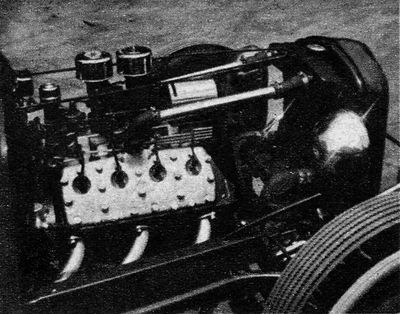 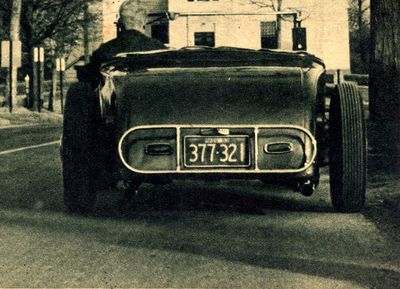 1930 Ford Roadster owned and built by Stuart Randall of Springfield, Massachusetts. Stuart's dream was to own his own Roadster Hot Rod someday, this dream, tempered by the availability of materials and funds for the project, was transferred to paper. Many drawings later, the rod he longed for was before him in two dimensions. Now for 3D!

The plan was to use a 1932 Ford frame as a starting point in the actual construction. A frame was located and cleaned thoroughly preparatory modification. The rails were chopped, and stepped with the rear crossmember being raised 10 inches. At the front, a new spring mount was fabricated forward of the crossmember to achieve normal wheelbase and longer springbase in conjuction with a reworked 1939 Ford front running gear. The radius rods were split to facilitate hookup and alignment, fitted with truck-sized tie rod ends, and strapped to the outside of the rails. The rear end, containing 4.11 screws, was purloined from a 1936 Ford, and the drive shaft was shortened sufficiently to tie in with the tail of the transmission, also from the '36. With consideration given to the gear ratio in the differential, the box was fitted with 26 tooth Lincoln cogs. Hose brakes originated from a 1939 Ford up front and from a 1948 Ford at the rear, these were connected to a 1939 Ford master cylinder.[1]

New England was not in the 1950s either bristling with old roadsters bodies laying around in fields, waiting for young fellows with a hobby to put them back in shape. Stu looked everywhere, he advertised, he drove the wheels of his other car running down false leads. Finally a last rumor paid off, a rough 1930 Ford roadster turned up. After channeling the body eight inches over the frame, the little rig was toured on a grand tour to the local fender bending shops. Four separate shops refused to take the car in at any price.. On went the tour, and in the end, it was left in several shops before the restoration was completed. The cowl and deck lid was molded in, giving it a smoother appearance. The windshield was chopped two inches, placing the overall height at 43 inches. A hood was bent up to extend over the increased distance between the cowl and the chopped and filled 1932 Ford grille shell. Nerf bars were fabricated from bar stock to protect the extremities, and chromed for appearance. Taillights from a 1941 Chevrolet were stuffed into the tail panel, while sealed beams set into Model-A headlights housing points the way ahead. With the metal work completed, Jefferson Auto of Springfield, padded the interior in a combination of blue and white Naugahyde. When the time arrived to think seriously about the propelling power to be lodged beneath the hood, the decision was reached to install a comparatively mild mill which could process lots of low speed torque and be dependable. A 1947 Ford 59 block was punched out 3 5/16 with LC slugs sliding four inches in the bore. An Edmunds manifold supports a pair of Stromberg 97's to supply the increased displacement. Headers carry the gases out through a set of Smith mufflers to give a pleasing echo in the New England countryside. A pair of Offenhauser heads were installed during the summer time on Stu's roadster.[1]

A small notebook full of numbers and a stack of receipts showed a total amount of $ 1700 invested during the year and a half of construction. Parts from 23 makes and models were sandwiched into the rig, which attracts much attention wherever it made its turn.[1]

Please get in touch with us at mail@kustomrama.com if you have additional information or photos to share about Stuart Randall's 1930 Ford.