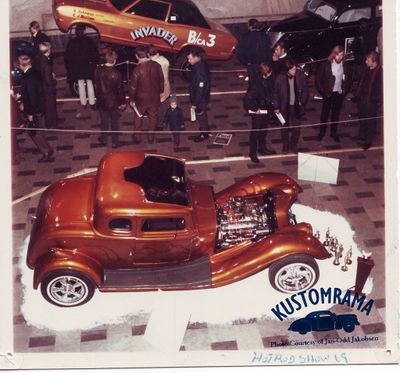 A photo of Steinar and his cousin Jan-Odd Jakobsen admiring the Glowing Coupe at the 1969 Hot Rod Show in Stockholm. Steinar fell in love with the radical down-in-the-front stance on Sven's coupe, and the design element etched into his brain. This photo appeared in the Norwegian men's magazine Vi-Menn. Photo courtesy of Jan-Odd Jakobsen. 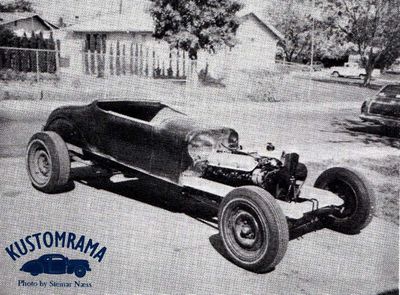 An under progress photo of the Folsom Flyer outside Steinar's home in Folsom. The Glowing Coupe inspired stance is very evident in this photo. Photo courtesy of the ACSN Newsletter. 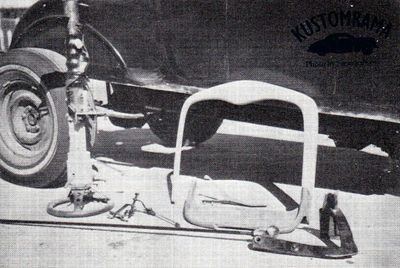 A photo of the steering column, pedal-assembly and the modified 1932 Ford grille shell. Photo courtesy of the ACSN Newsletter. 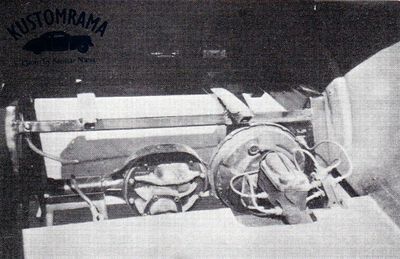 The brake master cylinder, gas-tank and battery were installed behind the seat. Photo courtesy of the ACSN Newsletter. 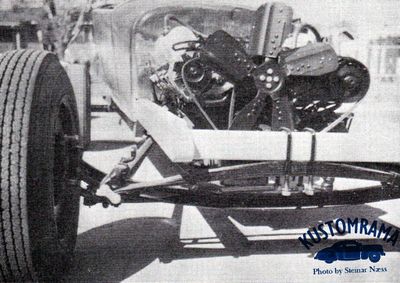 Steinar fit the Flyer with a 1937 Ford axle and suspension. Photo courtesy of the ACSN Newsletter. 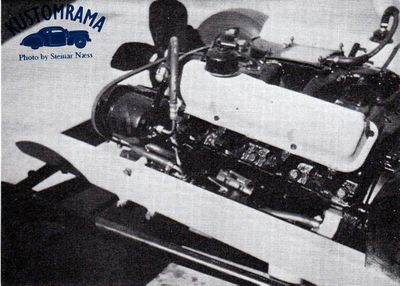 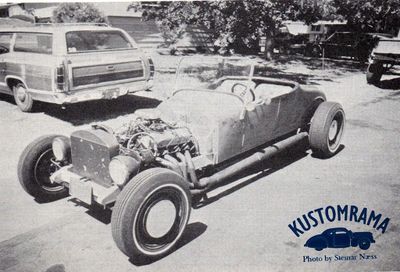 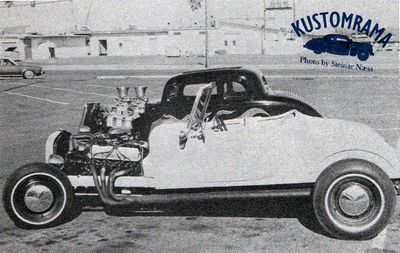 The Folsom Flyer next to Cole Cutler's 1934 Ford 5-window coupe. Photo courtesy of the ACSN Newsletter. 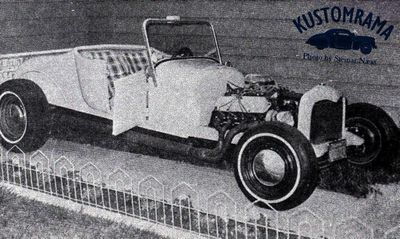 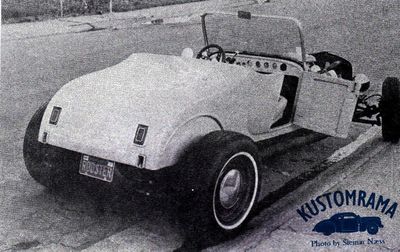 The Folsom Flyer is a fiberglass bodied 1927 Ford Model T owned and built by Steinar Næss of Folsom, California. Steinar's hot rod, known as the Folsom Flyer, was built around 1977 - 1978. Steinar was originally from Oslo, Norway, but he moved to the United States around 1973-1974. He settled down at the East Coast, found a girl, got married, and moved to Folsom, near the California State Capitol of Sacramento. When Steinar started the build, the project was primarily about fulfilling an old dream, as he in 1969 had seen Sven Sandberg's 1932 Ford 5-window coupe, The Glowing Coupe at the Hot Rod Show in Stockholm, Sweden. Steinar fell in love with the radical down-in-the-front stance on Sven's coupe. He remembered that it "appeared to have a "kink" in the frame at the torpedo section, so that the body had a pronounced rake in relation to the chassis." This seemed very cool to Steinar back then, and the design element etched itself into his brain.[1]

Steinar built the Flyer's frame from rectangular steel tubing. He Z'ed the frame at the firewall to get the body down to a desired height, while leaving room below the front of the frame for suspension. During the build the old brain-etching awakened, and Steinar included a few degrees of angle in the Z, imitating the look he remembered from the Glowing Coupe. In order to maintain the desired interior space, Steinar ran the frame behind the Z underneath the body. In order to hide it as much as possible he painted it black and covered it up with side pipes running the entire length of the body. Up front, Steinar installed a 1937 Ford axle and suspension. The frame was fit with a cheap fiberglass copy of a 1927 Ford Model-T roadster, that Steinar completed with a good deal of wood and fiberglass. A 1932 Ford fiberglas grille shell was cut and widened 5 inches, another Glowing Coupe inspired touch. Steinar owned a clapped out 1975 Ford Elite station wagon with a 390 Ford V-8 engine and C-6 transmission, so the drivetrain from that one ended up on the hot rod. He also installed the power steering and brakes from the station wagon. The brake master cylinder was placed behind the seat, so Steinar ran rods from the pedals and back to the master cylinder. The steering geometry and all such was correct due to the automotive vocational school in Oslo and Chrysler's more advanced school in Detroit. Inside, a dashboard was made from scratch using wood and fiberglas.[1]

When the build was completed, Steinar realized that the Folsom Flyer was a classic example of a car "built in a too small of a garage". According to himself, he had not considered the overall impression the car's profile gave from a distance, and he felt that the Folsom Flyer looked as if the Jolly Green Giant had stomped on it. He also felt that it had outgrown the exaggerated coolness of the Glowing Coupe. Lasse Anundsen, one of the foremost Amcar authorities of Norway, drove the Flyer after it was completed, and he announced that it functioned much better than it looked. Something Steinar still is proud of today. After completing the build, Steinar considered straightening the frame, but he never got around to do it. The Flyer ran personalized license plates that read "Rodster".[1]

As life interfered, Steinar wound up selling the Folsom Flyer to a fellow from Wilmington, California. He never saw the car again, but promised in 2013 that if he ever find it on a scrap heap, the first thing he will do is to straighten the frame.[1]

After selling the Flyer, Steinar built a similar car some years later. According to himself, a key step in that design process was to stretch many tight strips of adhesive tape from the body to the radiator, while viewing the car from all angles and distances to ensure that all the lines ran smoothly the full length of the car. The second rod was also fit with a hood, something he felt made it more complete and elegant compared to his first effort.[1]

Please get in touch with us at mail@kustomrama.com if you have additional information or photos to share about Steinar Næss' 1927 Ford.