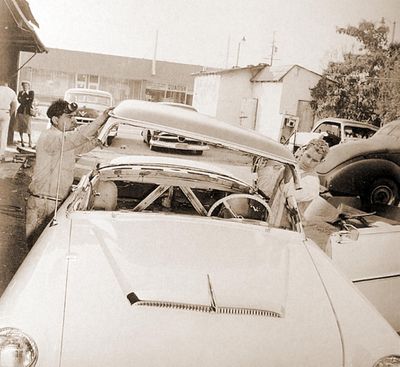 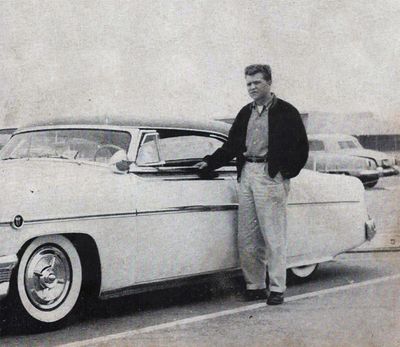 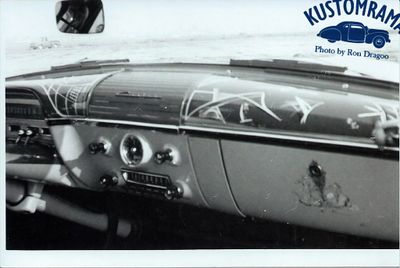 The dash in the Merc was pinstriped by the master himself, Von Dutch. 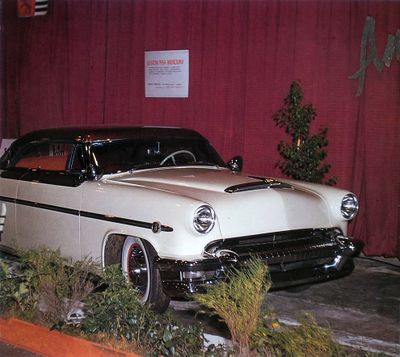 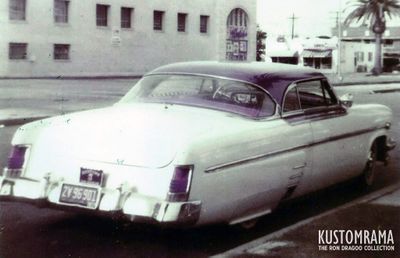 A rear en shot of the Merc from The Ron Dragoo Photo Collection. 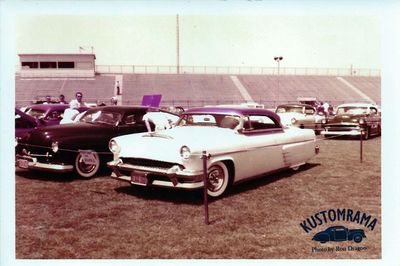 Ron's Mercury at an outdoor car show in the 1950s. In this photo, the Merc is parked next to Buddy Alcorn's 1950 Mercury and Louie Bettancourt's 1949 Mercury. Glenn Springer's 1954 Chevrolet Bel Air can be seen in the background. Photo from The Ron Dragoo Photo Collection, provided by Bill Layman. 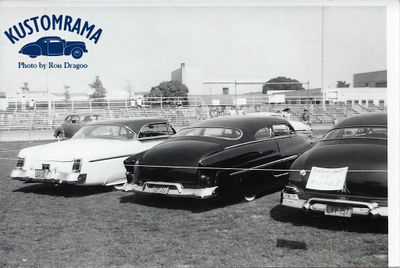 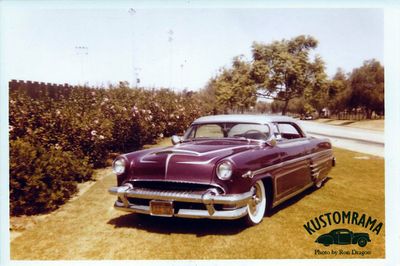 A rare photo of the scalloped version of Ron's Mercury. Sometime after Ron purchased the Merc from Dick, he had Dick repaint the car for him. Ron told Bill Layman that he took the car to Dick and gave him a free hand as to the color. There was no discussion about doing the scallops, so when he picked it up he was surprised and shocked to see that Dick had added the scallops. He wasn't very happy at first, but learned to like them after a while. Photo from The Ron Dragoo Photo Collection, provided by Bill Layman. 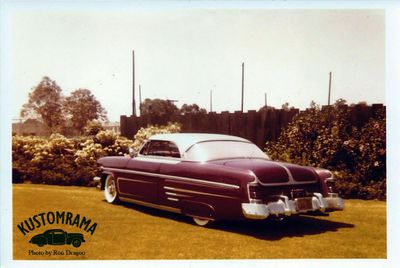 A rearview shot of the scalloped version of the Merc. Photo from The Ron Dragoo Photo Collection. 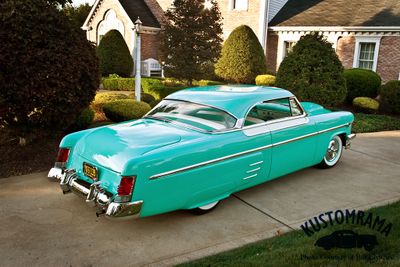 In 2005 Bill Layman of Bethel Park, Pennsylvania restyled a 1954 Mercury that was inspired by the Jackson/Dragoo Mercury.

1954 Mercury Monterey hard-top owned by Dick "Peep" Jackson of Lynwood, California. In 1954 Peep was driving his customized 1953 Studebaker when he spotted a Colonial White and Bittersweet Mercury on an Atlantic Blvd, car lot. The car had only 3000 miles on it and Peep bought it right away. Right after buying the Mercury, the car was lowered and fit with Appleton spotlights. The car was driven daily to work at Barris Kustoms. At the time Sam Barris was working on his 1952 Ford convertible, the car that later became known as the "safety car". One day during lunch, Sam and Peep were looking at the Mercury. They both wondered how the car would look chopped, so a deal was cut. Sam would chop Peep's Mercury in exchange for after-hours labor on the convertible.[1] According to Barris Kustom Techniques of the 50's Volume 1, 3 inches were cut out of the a-pillars, and 4 inches out of the rear. Trend Book 156 Custom Cars 1958 Annual claimed that the top was chopped 6 inches, but this is not correct. The wraparound rear window made Peep's Merc a difficult car to chop. Sam soon had it figured out and during the chop, the top of the rear window was leaned forward to give the correct shape to the roof and rear window profile. The way the Merc was chopped shortened the roof, giving it a shorter passenger area and a longer trunk.[2] Peep drove the car every day, all through the construction, so after Sam had chopped the top, Peep drove around wearing a pair of goggles while he waited for the windshield to be cut. After Del Mar Glass installed the windshield, Peep and his girlfriend drove the car around for a while without side windows or backlight. They had a tarp in the back of the car in case of bad weather. In addition to chopping the top, the door handles, hood emblem and side view mirrors were shaved off. The front bumper guards were relocated to sit closer to the fenders, then the front would appear wider. During the customizing process the 1955 Mercurys made their debut. Dick liked the Montclair trim beneath the side windows and installed a set of these on his 54. The bottom remained Colonial White, while the top and trim panels were painted "Sam Bronze". The stock Mercury interior was already pleated. Dick's Mercury was delivered with a black interior and Dick decided not to touch it.[1] The dash however, received pinstriping by the master himself, Von Dutch.[3]

During the build, Ronnie Dragoo of Long Beach, California spotted the Merc on the street and decided he had to have it. Peep didn't really want to sell the car, but Ronnie managed to convince him. Ronnie's mother told Ronnie that he couldn't buy the car before it was fully functional, so Peep had to install fully functional side windows and a backlight before the Merc swapped hands. After installing side windows and a Plexiglas backlight the deal was made. Ron traded a 1951 Mercury and cash for the '54.[3] When Ronnie got the Merc it was equipped with hubcaps made from Mercury and 1955 Buick parts. These were later replaced by a set of 1956 Mercury hubcaps.[1]

In 2005 Bill Layman of Bethel Park, Pennsylvania restyled a 1954 Mercury that was inspired by the Jackson/Dragoo Mercury. In 2006 The Rodder's Journal ran a featured story on Bill's Merc in The Rodder's Journal 31. After the story had been published, Ronnie Dragoo contacted Bill. Ronnie sent Bill some rare photos of his old custom, and he told Bill that after he had purchased the car, he had Dick Jackson repaint it. He gave Dick free hands as to the color, so Dick gave it a maroon paint job with silver scallops. There was actually no discussion about doing the scallops, so when Ron picked up the car he was surprised and shocked. He wasn't very happy, but learned to like them after a period of time.[3]

Please get in touch with us at mail@kustomrama.com if you have additional information or photos to share about Dick Jackson's 1954 Mercury.