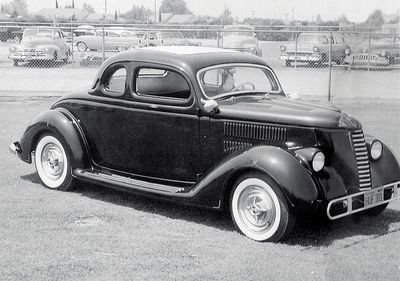 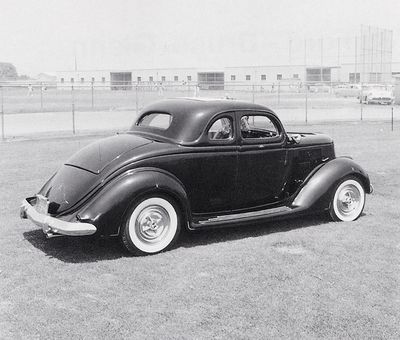 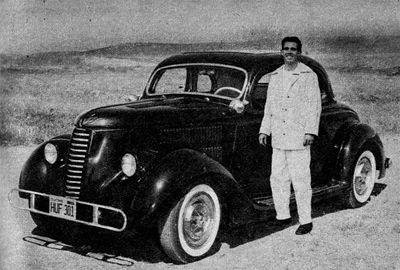 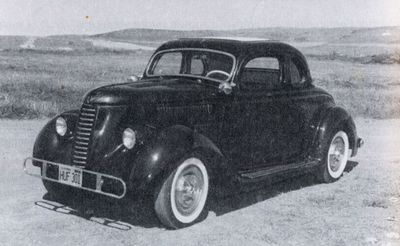 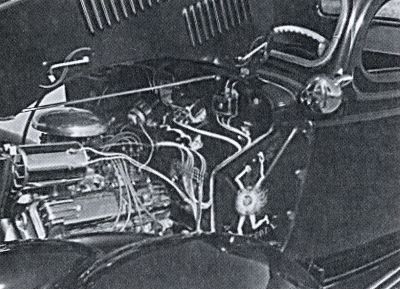 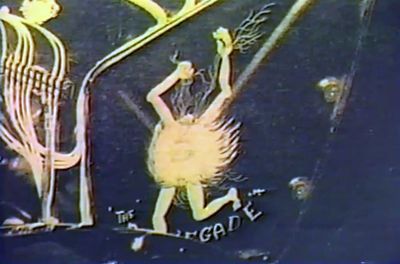 Dean Jeffries painted this hairy eyeball creature on the firewall.[2] 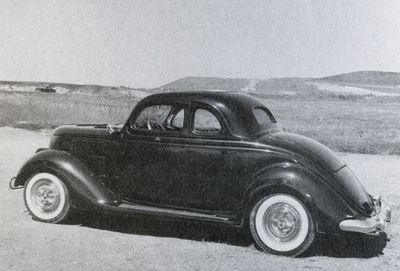 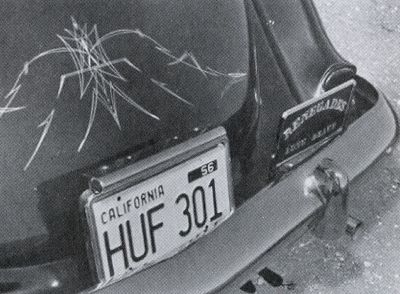 The pinstripings on the exterior were done by Art Summers. 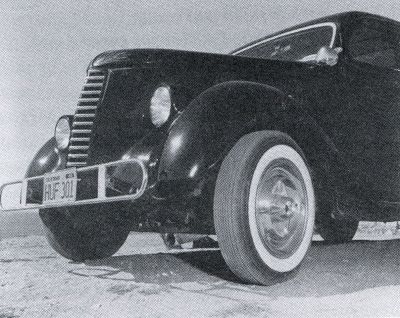 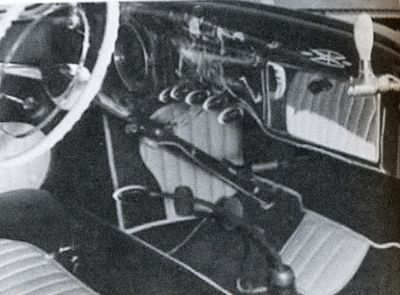 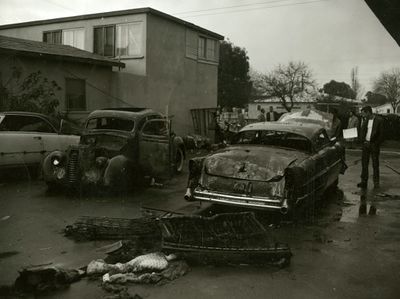 Ron's Ford as it looked like after the shop fire at Barris Kustoms December 7, 1957. 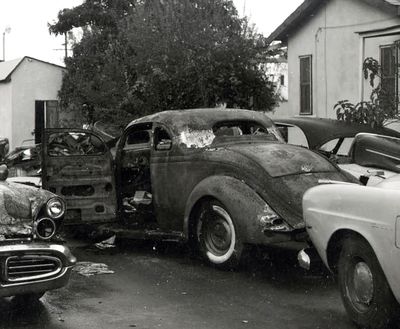 1936 Ford 5-window coupe known as "The Renegade." The Renegade was restyled by Roger Blogsom for Long Beach Renegades member Ron Guidry of Long Beach, California. The coupe was Ron's first car and he bought it for $150 that he borrowed from his father. First he used it as a daily driver, but after being bitten by the custom flu he decided to have it restyled. He went to Roger, who operated a shop in Anaheim and asked if he did custom bodywork. Roger had a Mexican body man working for him at the time and told Ron that he could do it. Ron was in high school at the time and had a paper route he did in order to finance the build, so he told him that he couldn't afford a lot. Roger then told him that they would do it a piece at the time then. They started by chopping the top. When that was done, Ron told Roger to replace the grille. Roger had a 1939 Nash grille sitting around, and asked Ron if he wanted them to put that on. Ron wasn't happy with how the grille looked on the car, so they turned it upside-down instead. They felt that the grille looked much better that way and modified the front end to accept the inverted Nash grille. They didn't like the headlights sticking out over the fenders, so they looked around and found a set of Pontiac headlights that would fit into housings molded into the fender. The hood and hood sides were sent to a machine shop to have louvers stamped into them. All of the seams between the fenders and the body were molded in and MG running board strips were attached to the running boards. The front bumper was discarded and a custom nerf bar was installed; the rear bumper was a cut-down 1951 Studebaker unit. The rear fenders were flared out in order to accept angled 1939 Ford cat's-eye taillights.[3]

A high performance Oldsmobile V8 engine for the car was built by Ed Mailliard and Joe Reath of Long Beach, California. Because of Ron's low budget, Ron's father, who was a retired electrician helped build the engine at Joe's shop. Joe told him that as long as he bought all parts from him, Ron and his dad could work in the shop and use his equipment.[3]

Once the bodywork was done the car was painted in a color called "Black Magic." It was really dark with a purple look and when the sun hit it all of the highlights would appear maroon. Art Summers did the initial pinstriping on the car. Ron didn't want a normal striper guy, and decided to use Art who had striped Stutz Bearcats on the factory line. Art was in his 70s at the time, and charged about $50 for the job. Dean Jeffries later painted the dash and firewall. On the firewall he painted an eyeball with arms & legs running and tearing things out of his own eyeball. Another graphic was a little guy coming out behind the regulator. The guy was running while his eyeballs were spinning around in his head because he got shocked. On the dashboard Jeff painted a picture of a guy blowing himself up. The first round of paintings were done while Jeffries worked out of the Barris Kustoms shop.[3]

James Wright, who attended school with Ron at Long Beach City College in 1955 and 1956, remembers one occasion when Ron was getting the car cherried out for a weekend car show. At noon, Claude Zedaker and James were taking the car top a shop in Bellflower to have it prepped while Ron was working. There was a hard rain as Claude drove north on orange Avenue up Signal Hill. At Willow Street, in the center of the intersection, the back wheels lost traction in the muddy run, and the car spun out and ended up against a dirt embakment, doing damage to the right rear panels. Claude and James drove it to the shop, and worked all night doing body work, matching and repainting, cleaning the undercarriage, buffing and polishing everything. The next day Ron took it to the show and won best in class.[4]

Ron later received a written invitation from the Oakland Roadster Show. They wanted to see his car in the show. Ron got a hold of Dean Jeffries again and asked him what to do to the car for the show. Dean suggested that they should paint green iridescent scallops on it and told Ron not to worry about it. Ron left the car at the Barris shop December 6th, 1957. The next night the shop caught fire and Ron's Ford was lost among 13 other cars. Barris Kustoms insurance company said it was an act of god, and refused to pay. Ron who was in the Navy at the time, couldn't afford his own insurance, so he hired an attorney. Ron's attorney said that Barris had no insurance, and that he could go after him, but that is going to cost a ton of money. George Barris had offered to settle out of court for $750. Ron accepted and had to give $250 to his lawyer. Everything on the car was destroyed. The car had been equipped with a dropped Cragar axle and fully chromed rear end and running gear, so Ed Cousins bought the remains for $150.[3]

According to the book Barris Kustom Techniques of the 50's - Volume 1, some of the modifications on the car were done by Barris Kustoms. In the book George Barris claims that they chopped the top, but when Justin Kudolla of Trend Book 207 Custom Cars 2009 Annual interviewed Ron about the car he didn't mention anything about the Barris connection except for the fire. In the story he also claims that the top was chopped at Roger Blogsom's shop.

Please get in touch with us at mail@kustomrama.com if you have additional information or photos to share about Ron Guidry's 1936 Ford.