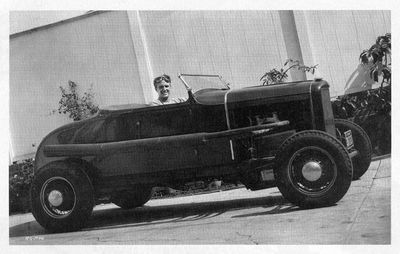 Bob with his roadster in 1938. Photo courtesy of the Stack Family.[1] 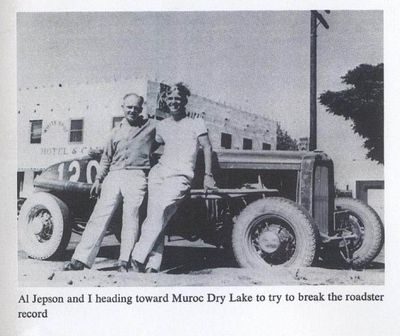 Al Jepson and Bob with the roadster heading toward Muroc Dry Lake to break the roadster record. Photo courtesy of David Zivot, from The HAMB. 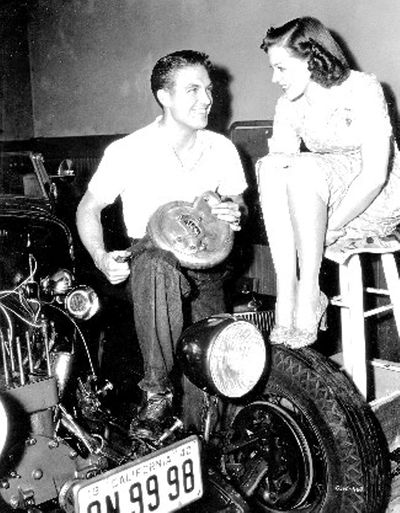 A Universal Studios publicity shot of Bob with the roadster, getting it ready for a 1940 Harper Dry Lake event. In the photo Bob is holding a McCulloch supercharger. Bob never installed the blower, he was just handling it for the shot. Photo courtesy of The HAMB. 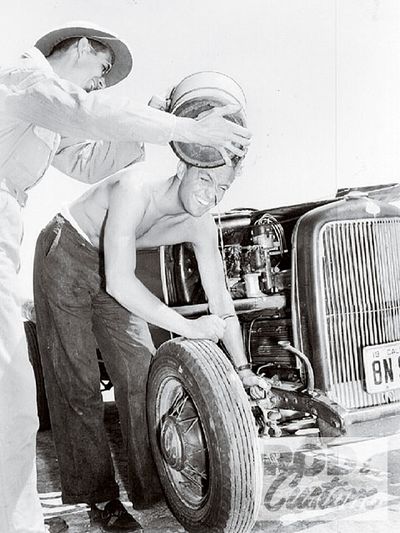 Wally Parks and Bob with the roadster. Photo courtesy of Rod & Custom Magazine.

Bob with the roadster. This photo appeared in a gentlemans magazine. Photo courtesy of The HAMB.

1931 Ford Model A Roadster built by Al Jepson for movie actor and Pacemakers member Robert Stack of Hollywood, California. Bob's father died when Bob was nine years old, and Clark Gable kind of became his surrogate father. Living in Hollywood, surrounded by successful actors, Bob became interested in automobiles at an early age. The racing bug bit Bob at an early age as well, and it all began with a fellow with an old Model A named Al Jepson. Al was a former bullring racer who also raced at Indianapolis as a mechanic. Al worked out of Joe Mozzetti's garage in Hollywood, and one day, when Bob went by the shop, Al offered him a ride in his Model A. Bob remembers that the car had all kinds of special work done to it. You couldn't see it, but when he heard it go he knew it wasn't the way Henry Ford designed it. Bob and Al went cruising down Santa Monica and spied some gow jobs. Al jabbed it and speed shifted through three gears and sucked the goggles of them all. That was it for Bob, he was now bitten by the bug.[2]

Al Jepson built the Model A for Bob in Joe's shop in 1938. In addition to Al, Ed Winfield and even Bob himself, who was 19 years old at the time, had a hand in the build. Some sources states that the car was built in 1936, but according to David Zivot, who interviewed Robert about the roadster, the car was built in 1938 and not 1936. When the car was completed Bob drove the lakester to a record of 115.68 mph on the Muroc Dry Lake, a time not too many four-cylinder Fords could match in 1938. Bob's roadster featured a Cragar OHV converted Model B four-banger engine that Al and Ed had fit with twin Winfield carbs and a Winfield cam. The windshield was chopped and slanted, and the car had been fit with a 1932 Ford commercial grille shell. The body was smoothened by removing the rear wheel arch where the fender would mount, and a long exhaust stack ran all the way down the passenger side of the car. In an interview with Motor Trend magazine in 1998 Bob remembered that the compression in the engine was so high, 13-1 running 100 octane and methanol, that they couldn't turn the engine over with a battery, so they had to drag it real fast and let out the clutch in order to start it.[2]

Nobody knows what became of the car, but the original Model B Cragar OHV converted engine that Bob ran at the dry lakes ended up in the possession of Wes Cooper. It was then sold to Kong Jackson, who eventually sold it to David Zivot of Las Vegas, Nevada. David still owned the engine in 2013, and at the time David was endeavoring to do an accurate replication of Bob's roadster around the engine. Before Robert died in 2003, David had a few conversation with Robert concerning the car. Robert was very excited about David's project, and shared valuable information about the car with him.[3]

Please get in touch with us at mail@kustomrama.com if you have additional information or photos to share about Robert Stack's 1931 Ford.