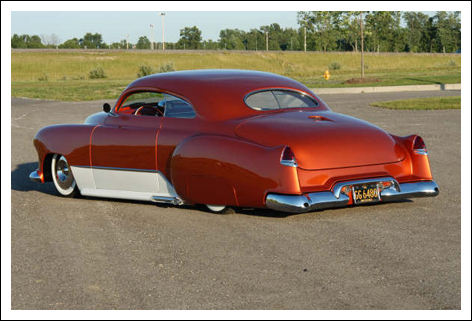 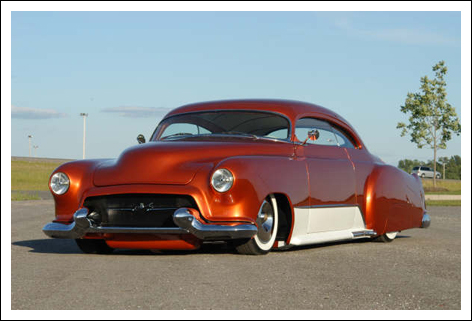 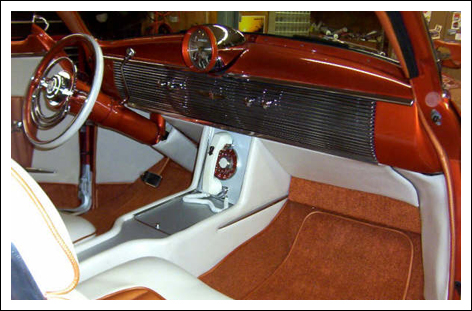 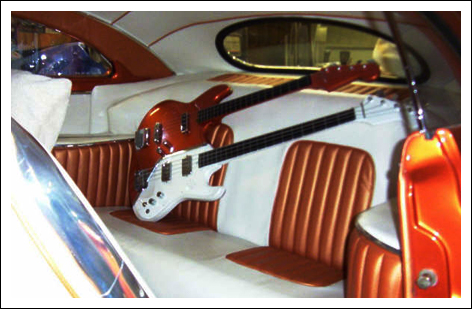 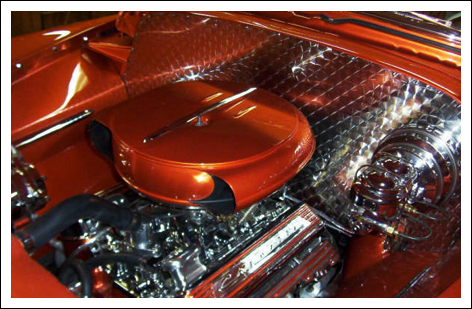 Rob Gerring is the proud designer and fabricator behind this timeless piece of automotive art. The coupe is chopped, hardtopped and equipped with a 1950 Oldsmobile windshield. A 1941 Mercury rear window is used in the rear. In the front, the headlights were frenched, lowered 1 inch and extended 2 inches. The hood corners were rounded, and the hood pie sectioned 2 1/4 inches. The grille opening was modified and equipped with dagmars from a 1956 Cadillac. The rear bumper and side trim comes from a 1955 Pontiac. Both front and rear bumper were frenched into the body.

The old Chevy chassis was tweaked with fresh components including early Camaro subframe with Fatman narrowed tubular a-arms, disc brakes, and airbags front and rear. The rear frame was also C'ed with trangulated 4 bars. Cruising power comes from a smoothed and detailed 350 4 bolt chevy engine and a 700R4 tranny. Caddy air cleaner and lots of custom trim add a final custom touch. Once the chassis was complete, Rob mounted a set of BFGoodrich wide whites and 1952 Cadillac wheel covers.

During the closing stage of the project, Gary Brown of Browns Metal Mods did the finishing bodywork and painting. Gary applied Cinnamon Pearl with Snow White Pearl from House of Kolor on the car. Rob then turned the car to Dave Martinez at Martinez Custom Upholstery to stitch the two-tone interior. 1950 Nash gauges were installed on the hand buillt dash and grille. The steering wheel is a highly modified LaCarra steering wheel with a clock on the horn button. The front seats are ripped out of a T-Bird, rear seat is handbuilt. The car is also equipped with a custom center console with 50's era phone, like all good Kustoms have. The trunk is also fully upholstered to match the interior.

The Chevy was introduced in 2003, and has since then been awarded the Winner of the 2004 Alexander Brothers Design Achievement Award at the Detroit Autorama, Custom Gold at Starbirds Wichita Rod and Custom Show plus Daryl's personal pick of the show, numerous Gene Winfield picks, John D'Agnostino pick, ISCA Top 10 and international class champion, and on and on and on. Rob has once proved with his kustom that nostalgia and good taste never go out of style.

Please get in touch with us at mail@kustomrama.com if you have additional information or photos to share about Rob Gerring's 1950 Chevrolet.