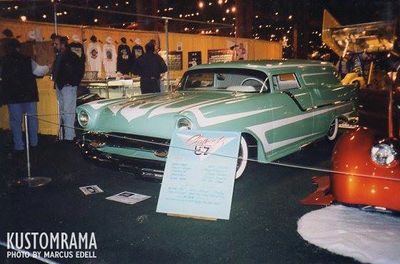 A photo of Rich's Chevrolet taken at the 1998 Grand National Roadster Show, where the build made its debut. Photo by Marcus Edell. 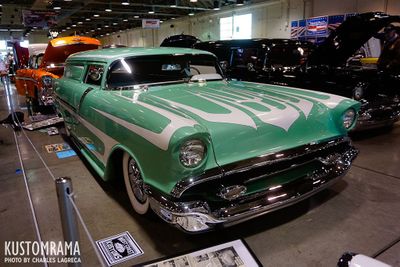 Rich's old Chevrolet at the 2017 Grand National Roadster Show where it was one of the cars displayed in the “60 Years of Tri-Five Chevys” exhibit. Photo by Charles LaGreca.

1957 Chevrolet sedan delivery owned by Rich Pichette of Moreno Valley, California. Rich bought the car in 1985. The first version was pale yellow with a 1957 Buick grille. The Buick grille was later swapped for a 1955 Oldsmobile unit with filled letter holes.[1]

About 1992 a rear end accident led to a rebuild of the car. Gary Minor repaired the rear end and installed 1957 Chrysler taillights, while Bill Hines chopped the top 4 1/2 inches. Bill did also shave and reskin the hood with a 1957 Pontiac hood skin. 1955 Pontiac Safari side trim was installed, and it received dual frenched antennas by Bill, one of his signature modifications. The front fenders were shaved and molded in, and the headlights were frenched. The vent windows were removed, and the door handles were shaved. Cable operated electric solenoids were installed to operate the shaved doors. Bill Hines shaved the tailgate and installed a shrouded license plate. The fuel filer was relocated inside, and a smoothed and modified California one piece front bumper with the bullets removed was installed. A passenger car rear bumper center with a license plate light was installed in the rear. The side pipes were molded in before Bill gave it a custom mixed Pearl Green paint job. Jerry Weesner laid out scallops on the car that Bill painted Murano Pearl. Larry Watson pinstriped the car in Emerald green. The build made its debut at the 1998 Grand National Roadster Show.[1]

Please get in touch with us at mail@kustomrama.com if you have additional information or photos to share about Rich Pichette's 1957 Chevrolet.