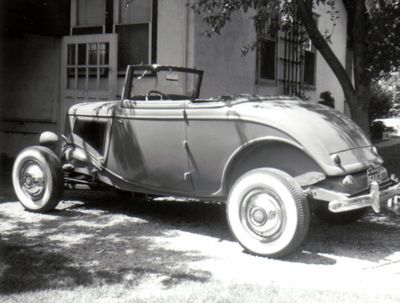 The Ford as it appeared in 1954. Photo provided by Ray Erickson. 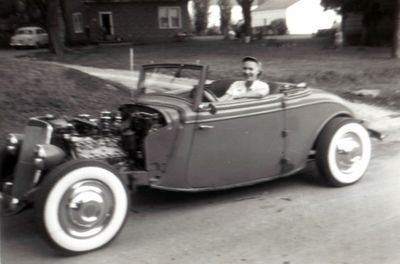 Ray's '34 right after he channeled it. Photo provided by Ray Erickson. 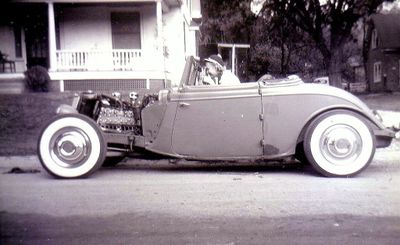 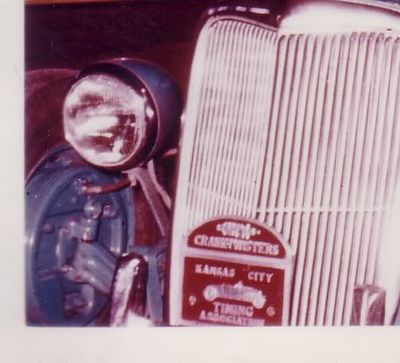 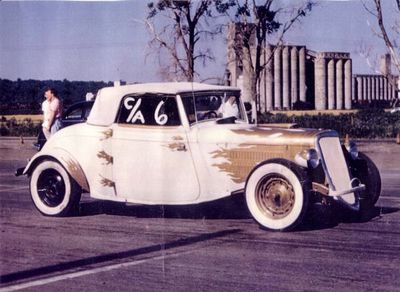 Ray's Ford at the KCTA dragstrip in 1956.Photo provided by Ray Erickson.

1934 Ford Convertible owned by Kansas City Cranktwisters member Ray Erickson of Kansas City, Missouri. Ray found the '34 hidden in the back of a used car lot on Truman Road in Kansas City. The top was hanging down on the seat when he found it, the back fenders were missing along with the front. It had a stock 21 stud flathead, and the Crankshaft was split in the center main bearing. Ray paid $85.00 for the car.[1]

After dragging the car home, Ray bought a 1946 Mercury flathead that ran for $35.00 from a local junk yard. In order to get the car up and running, he put new shoes on the mechanical brakes, and he got a new top with pads from "Sears-Roebuck" for $33.00. After going over the car, Ray drove it around as a highboy for a while before he channeled it 6 inches over its frame. The mechanical brakes were also replaced by a complete set of 1940 Ford brakes. The engine was fit with four Stromberg carburetors. By 1956, the Ford had been clocked at 90.45 mph at the KCTA drag strip.[1]

Please get in touch with us at mail@kustomrama.com if you have additional information or photos to share about Ray Erickson's 1934 Ford.