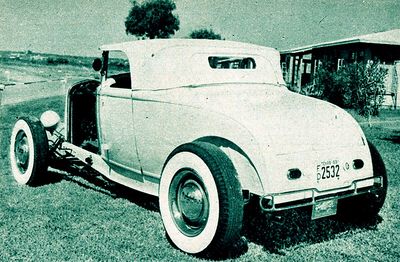 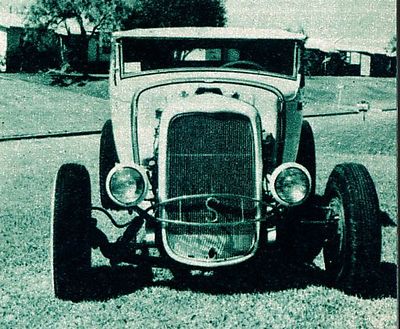 The dash was hand tooled by Ralph, featuring numerous patterns and artistic designs like flowers, leaves and the likeness of a womanPhoto by Billy O. Boyles. 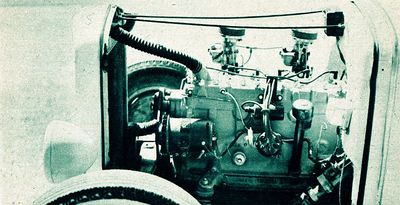 The engine was a 1951 Ford inline six, sporting a Edmunds intake manifold and split exhaust. Photo by Billy O. Boyles. 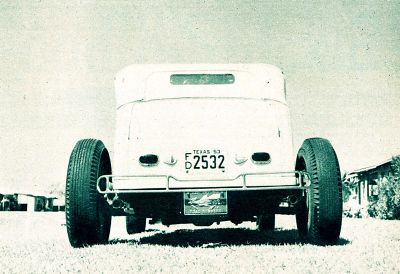 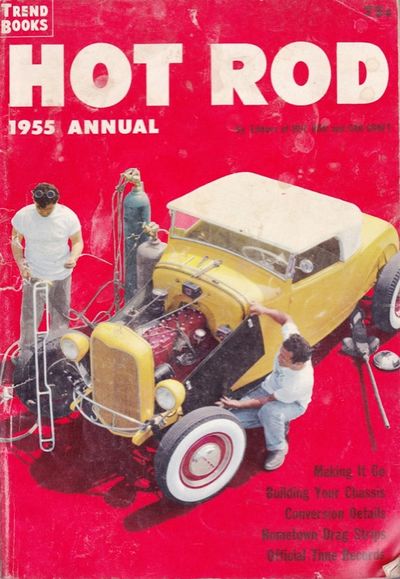 Ralph's roadster was featured on the cover of Trend Book 117 Hot Rod 1955 Annual.

1931 Ford Model A Roadster owned and built by San Antonio Road Runners member Ralph E. Stone of San Antonio, Texas. Ralph was a saddle maker and a leather maker by trade, and a true fan of custom cars and hot rods by hobby. Therefore it was only natural when building his roadster that he would combine those two elements. The dash for instance, was outstanding, with numerous patterns and artistic designs like flowers, leaves and the likeness of a woman. The body was a 1931 Ford, dropped on a 1932 Ford frame, which had been stepped six inches in the rear to eliminate the need for longer shackles. The front axle was dropped and filled, and the wishbone was split and mounted to brackets under the frame rails. The front spring eyes were reversed to give an extra 2" drop. The steering assembly was stock 32, except for the addition of a 1950 Ford steering wheel. The car featured newer spindles with juice brakes, and a chromed steering arm. It had 60-40 double acting shocks. The windshield was chopped, and a white canvas top was installed. The top was held in place with 4 bolts, and was easy to remove. Besides from the leather dash, the cluster hailed from a 1949 Ford, with an extra electric tachometer.[1]

Ralph had Tony Lawrence of Castroville, Texas to take care of the mechanical features on the car. And when it came to choose an engine for it, they picked a nearly stock 1951 Ford six cylinder. It was mostly just because they had it in possession, and because they wanted something unusual in it. The only alteration to the engine was an addition of an Edmunds dual intake manifold and a split exhaust manifold. The engine mounts had to be hand made in order to install it. The transmission was a 1941 Ford unit, stuffed with 26 tooth cluster gear and column shift. The read end was from a 1940 Ford, sporting a set of 3.54 gears.[1]

The body was kept as smooth as possible. The deck lid had been filled, and was electrically operated, by an convertible Studebaker electric top screw jack. The door handles were shaved, as well as the tank filler cap. The 1932 Ford grille shell was filled as well. A custom Nerf bar was made up front, with the letter S being centered. The rear Nerf bar was hand made as well. The taillights were from a 1942 Ford. Once the bodywork was done, it was painted yellow, with the engine done in red as a bright contrast. The color scheme was topped off by red wheels, white walls and chrome beauty rings.[1]

The upholstery was done by Ralph, and was all done in leather. The side panels were padded and pleated with genuine leather. The scuff mats and carpets were the same color as the base material. The trunk compartment was done in the same matter as the interior.[1]

When Ralph's car was featured in Rod & Custom February 1954, he was currently in the service, and Tony Lawrence was the caretaker of it. He could confirm that future plans for the car included a hopped up engine, chroming all the parts that could be removed, and making a belly pan. [1]

Please get in touch with us at mail@kustomrama.com if you have additional information or photos to share about Ralph Stone's 1931 Ford.