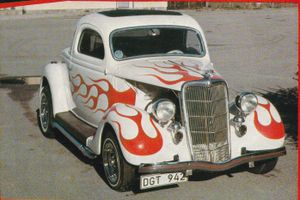 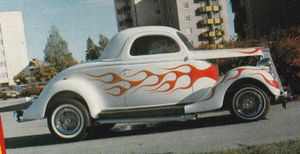 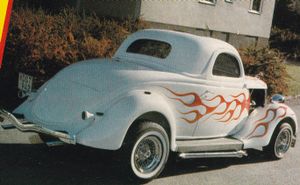 Per Bessing from Enköping was only 18 years old when he finished his 1935 Ford Coupe. He found a wreck in Kalmar and by 8 months of hard work he got the car as he wanted. Much due to the fact the car was complete with all parts.


Ingemar Becker did the paint job in white pearl and red flames. The car was approved using original 85 hp engine and chassie except hydraulic brakes from 1947 Ford. Later Per changed to a 307 ci Chevy smallblock.


1992 the car was sold to Sören Krafft in Simrishamn, Skåne.

Please get in touch with us at mail@kustomrama.com if you have additional information or photos to share about Per Bessing 1935 Ford Coupe.