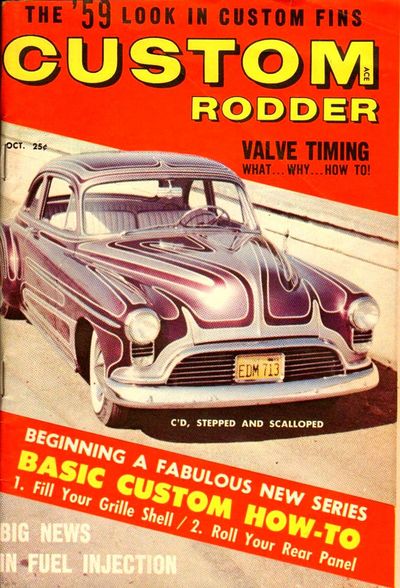 Paul's Olds was featured on the cover of Custom Rodder October 1958. 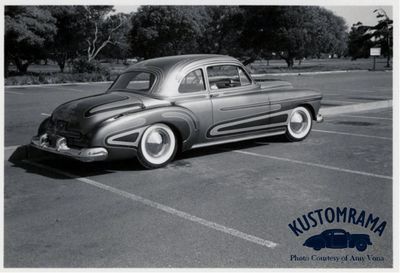 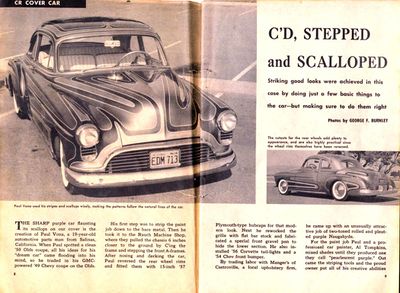 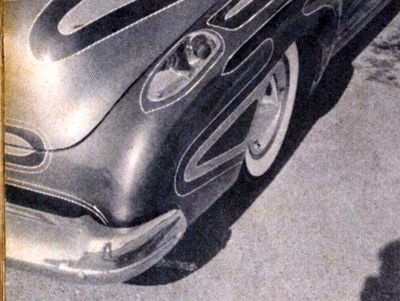 Paul fit the Olds with taillights from a 1956 Chevrolet Corvette. Photo by George F. Burnley, courtesy of Custom Rodder Magazine. 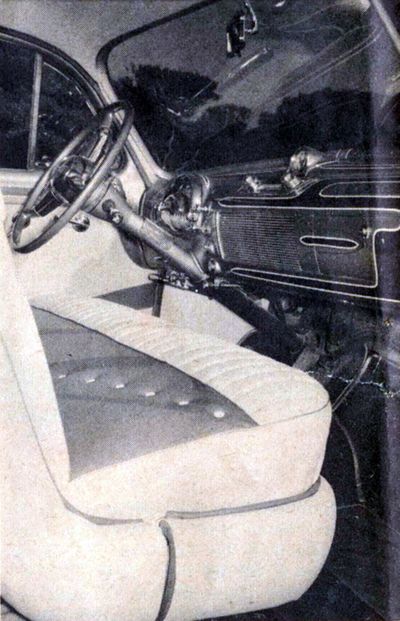 1950 Oldsmobile coupe owned by Paul Vona of Salinas, California. Paul was an automotive parts man, and he owned a GMC-powered 1949 Chevrolet coupe when he spotted the clean Olds. The year was 1957, he was 19 years old, and all his ideas for a "dream car" started to flood into his mind when he saw the Olds, so he ended up trading the Chevrolet for it. Paul started the build by stripping the paint job down to the bare metal, before he took it to the Rauch Machine Shop, where they pulled the chassis 6 inches closer to the ground by C'ing the frame and stepping the front A-frames. The car was nosed and decked, and the rear wheel wells were radiused for a modern look. The rear rims were reversed and fit with modern 15-inch 1957 Plymouth hubcaps. The grille was reworked with flat bar stock, before a new gravel pan was fabricated to hide the lower section. A front bumper from a Chevrolet was installed on the restyled front. In the rear, Paul installed 1956 Chevrolet Corvette taillights.[1]

By trading labor with Manger's Upholstery, a local upholstery firm, Paul came up with an unusually attractive job of two-toned rolled and pleated purple Naugahyde. For the paint job, Paul and a professional car painter, Al Tompkins, mixed shades until they produced one they called "pearlescent purple." Armed with his striping tools, Paul put all of his creative abilities to work on the car. He added a distinctive touch to the scallops with "pearlescent silver" and white striping. The stripes and scallops were made to follow the natural lines of the car.[1]

Once completed, Paul's Olds landed the cover of Custom Rodder October 1958. According to the featured story in the magazine, Paul was pleased with the results of his work, and he told writer and photographer George F. Burnley that careful planning made the job and inexpensive one. Paul's Olds was a crowd pleaser, and it was frequently used as "eye-catcher" near the main entrance at several West Coast shows.[1]

Andy Southard photographed the car in February of 1960, by then it had been painted in purple primer. This photo was used in Andy's book Custom Cars of the 1950s.[2] Frank M. Mantua owned the car for a while while it ran purple primer and a rolled rear pan. In 2016 Frank told Kustomrama that the dashboard and interior were still intact then.[3]

Please get in touch with us at mail@kustomrama.com if you have additional information or photos to share about Paul Vona's 1950 Oldsmobile.