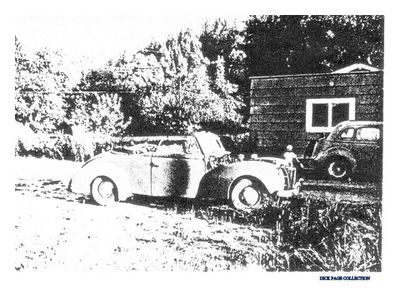 An early construction photo of Paul's Ford from the Dick Page Collection. 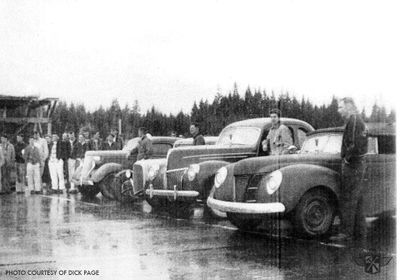 Another in progress photo of Paul's convertible at a Clusters of Grays Harbor gathering. Photo courtesy of Dick Page. 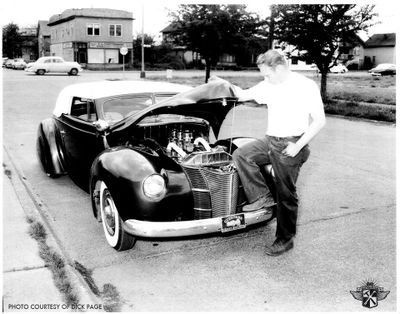 This photo of Paul with the Ford appeared in the local paper in a story about his success in the seasons drag racing final standing. Photo courtesy of Dick Page 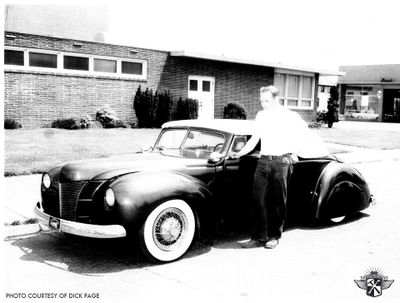 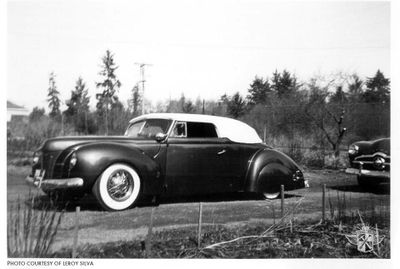 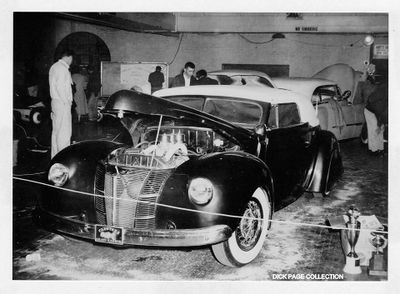 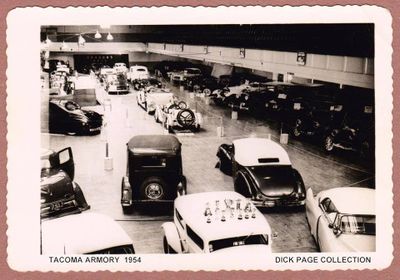 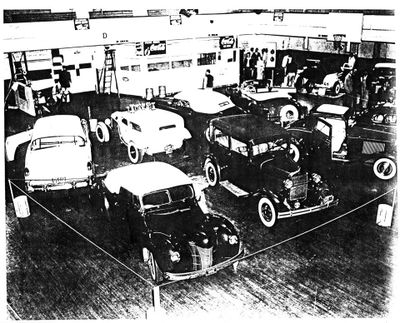 Another photo from the 1954 Tacoma Timing Association show. Paul's Ford is displayed amongst a group of Clusters of Gray Harbor cars. Photo courtesy of Dick Page. 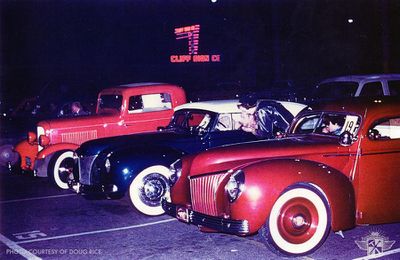 Paul's Ford next to Doug Rice's 1939 Ford coupe and Ray Simbe's 1932 Ford 3-Window Coupe, at Buck's Drive In in Tacoma, Washington, after a car show. Photo courtesy of Doug Rice. 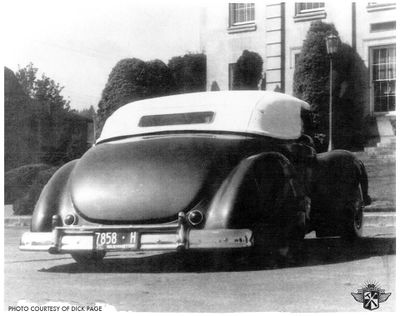 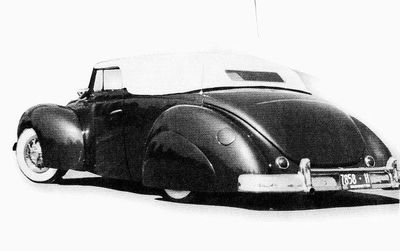 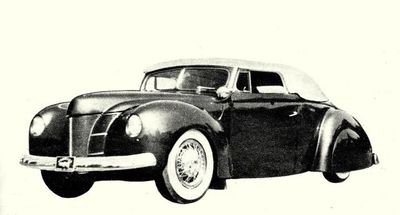 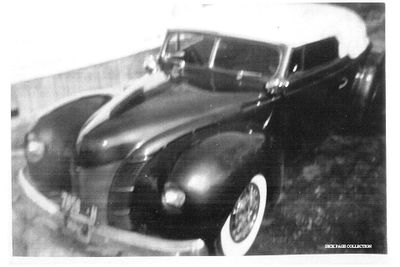 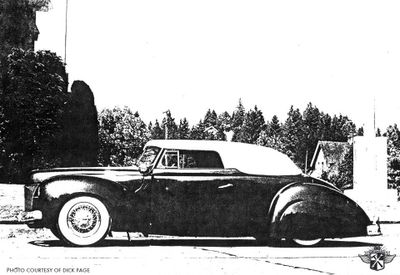 Paul's Ford as it appeard in 1955. Photo courtesy of Dick Page. 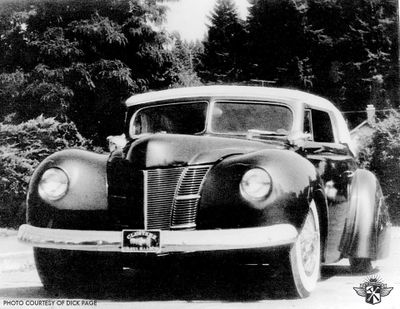 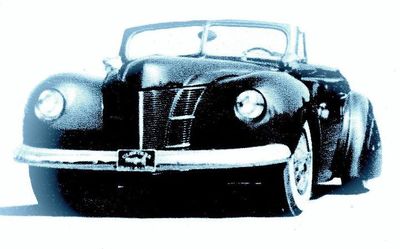 This photo of Paul's Ford appeared in Rod & Custom January 1956. 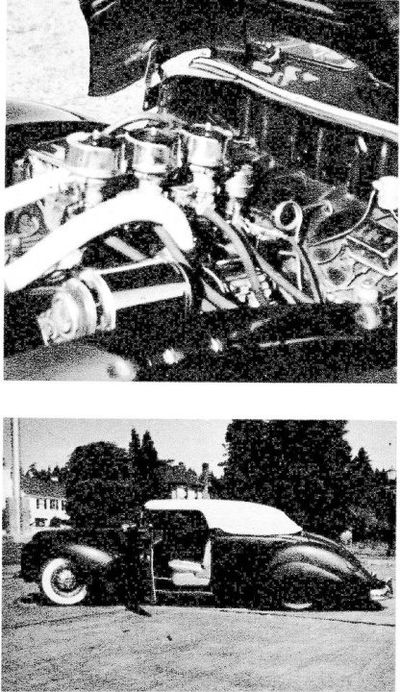 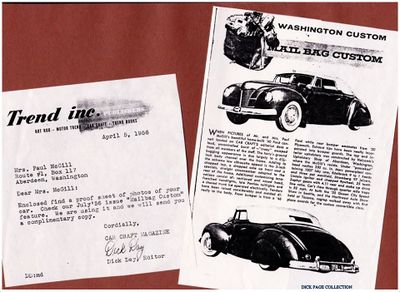 A letter from Dick Day, the editor of Car Craft Magazine, dated April 5, 1956. Paul received this letter along with a proof sheet on the story of his car that was posted in the "Mail Bag Custom" section of Car Craft July 1956. Photo courtesy of Dick Page.

1940 Ford Convertible owned and restyled by Clusters of Grays Harbor member Paul McGill of Aberdeen, Washington. Paul built the ford in his backyard using simple hand tools. The body was channeled 6 1/2 inches and chopped an additional 5 inches. The hood was sectioned the same amount as the channel, and the front fenders were raised on the cowl to meet the hood. The rear fenders were also raised as much as possible before Paul trimmed all fenders at the bottom to line up with the door bottoms. A 2 1/2 inch axle dropped the front, while a flat rear crossmember brought the back 4 inches down, while retaining stock ride. The ground clearance of the car was then reduced to 4 1/2 inches. The rear bumper was a 1950 Plymouth unit, and the taillights were 1950 Pontiac. A 1946 Ford gas flap was installed in the left rear fender.[1] The front was restyled by frenching the headlights, and by installing a 1946 Ford bumper. The distance between the body and bumpers were spanned with special gravel deflectors.[2] Paul's friend Lee H. Thomasson remembers that while Paul was building the '40, he and his wife were on a trip to California. They wound up in Watts, where Paul spotted a 1940 Ford convertible sitting abandoned in a vacant lot. Never one to be shy, Paul asked the young black man if anyone owned the car. When he told no, Paul asked if anyone would mind if he took some parts from it. He told him no, and Paul pulled out his tools. Paul's terrified wife laid down in the seat while Paul, a white guy, stripped a car in Watts.[3]

All exterior ornamentation, with the exception of the doorhandles, were shaved. Once the bodywork was completed, the car was painted dark blue metallic. The upholstery was done in blue and white, by Holcomb of Aberdeen, to match the exterior of the car. Dual spotlights and early wire wheel hubcaps dressed up the appearance of the car. Paul's channeled convertible took first place in the biggest shows in western Washington and won the class F trophy at the Shelton drags 10 times in a row to finish the 1953 season un-beaten.[1]

Paul sold the Ford to buy a new Corvette. The '40 was in Olympia for a while, before the late Darrel Aronson made a trade on it. The owner had to back out of the trade, as his wife threatened to divorce him if he traded the car.[3] Dick Page belives he saw the remains of the car in storage at one of Harold Lemay's overflow holding areas in the 1980s.[1]

Please get in touch with us at mail@kustomrama.com if you have additional information or photos to share about Paul McGill's 1940 Ford.