From Kustomrama
(Redirected from Pandora's Box)
Jump to: navigation, search 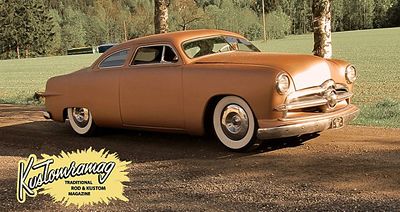 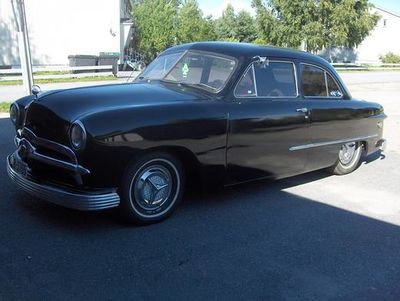 Autumn of 2006, the car as it sat when Kasper purchased it. 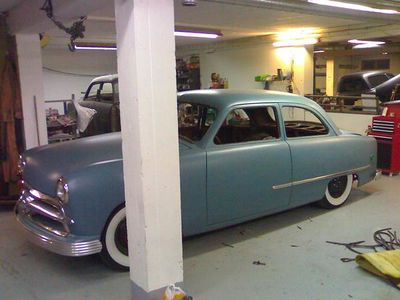 Winter of 2007, the car getting ready to be chopped. 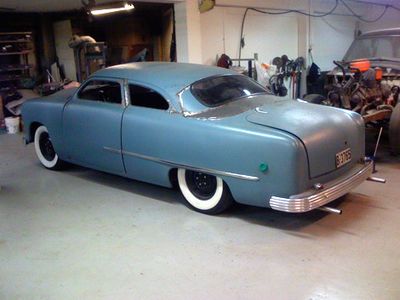 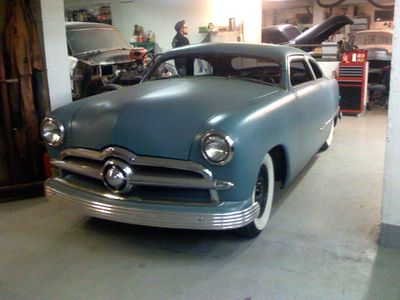 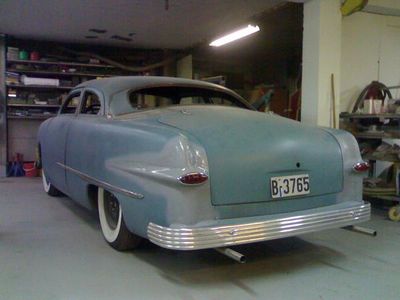 The wind-flares has been repositioned and the rear quarter panels has been extended. 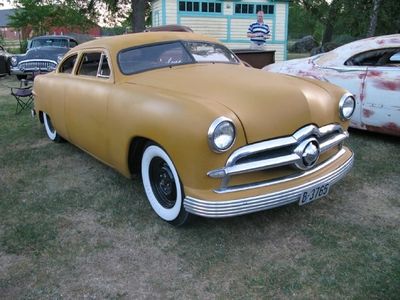 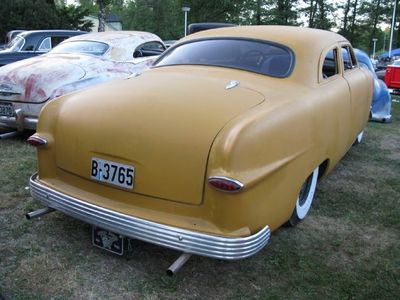 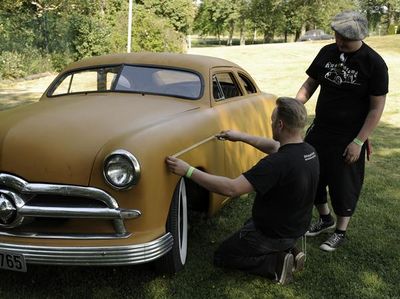 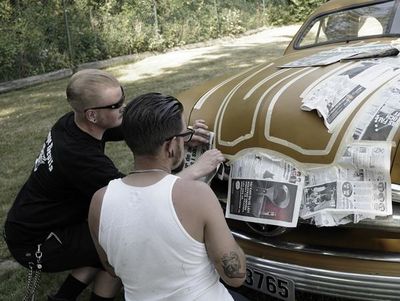 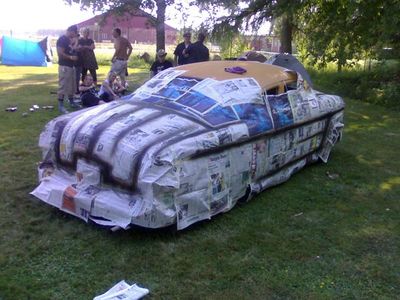 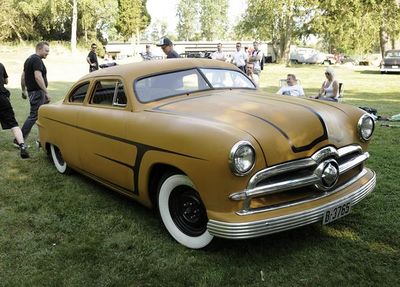 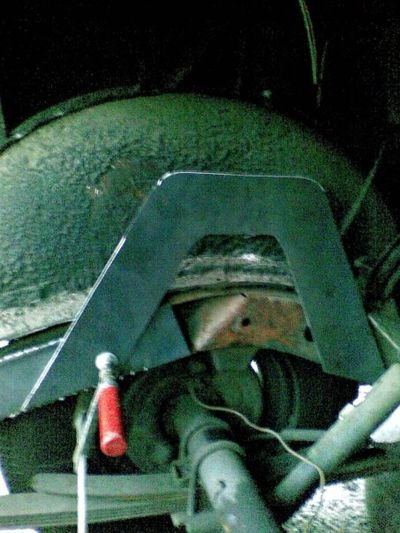 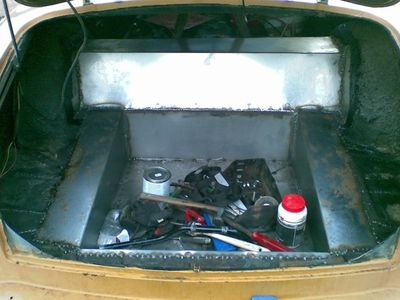 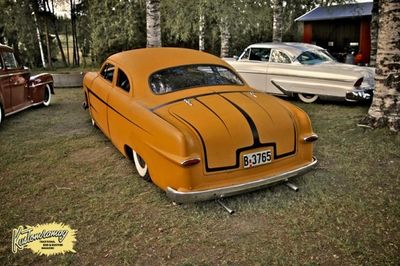 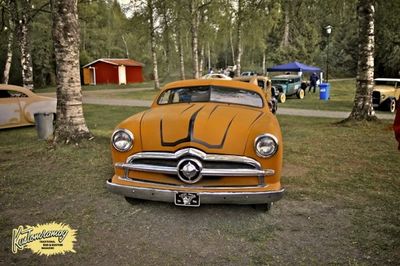 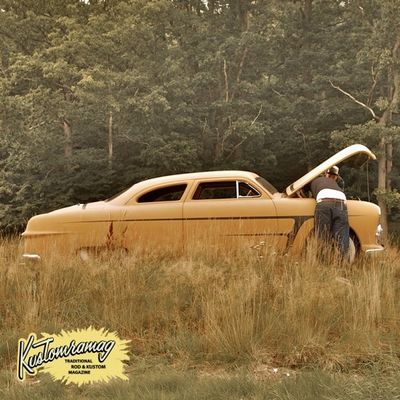 Trouble on the way to A-Bombers Old Style Weekend 2009. Photo by Sondre Kvipt. 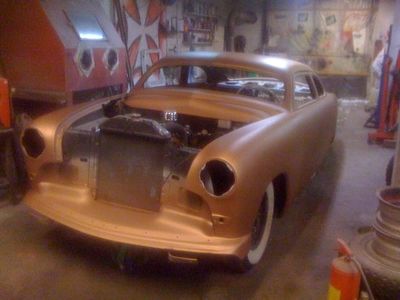 Fresh out of the paint booth. Photo by Kasper Kaarbø. 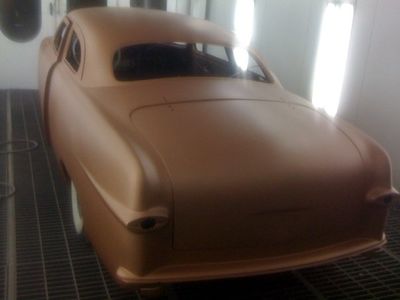 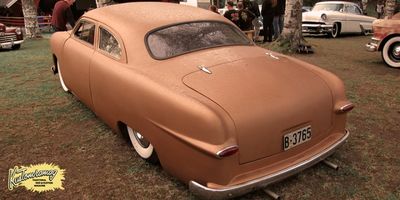 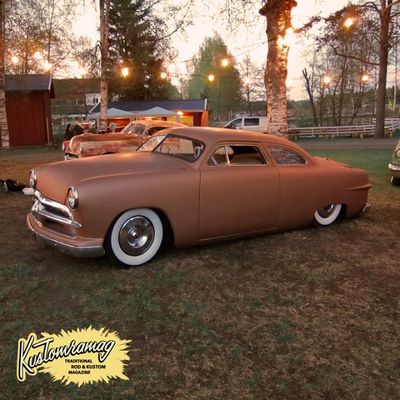 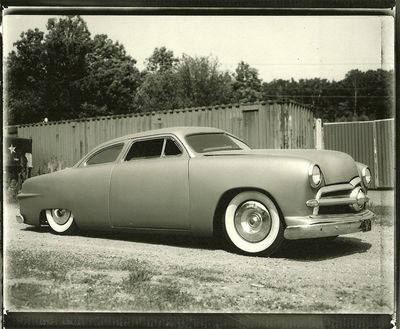 1949 Ford Tudor owned by Coupe Devils member Kasper Kaarbø of Oslo, Norway. Kasper bought the car in October 2006, the car was almost stock except for some extra accessories which had been added such as aluminum ripple bumpers, Maltese-cross mirror, Oldsmobile Fiesta hubcaps and the windows had been tinted. The car was registered for the first time in Norway on August 17th, 1993. During the winter he shaved the door handles to achieve a cleaner appearance, it was nosed decked as well. He cut the wind-flares on the quarter panels with the taillight assemblies out and mounted a pair of motorcycle brake lights on top of the rear bumper. The car was primered blue by the spring of 2007 and it remained that way until the winter. Next step was to have fellow club member Kjetil Kvipt to chop the top on the car. Kjetil chopped the top 4 1/2 inches in the front, and 6 inches in the rear. The wind-flares were installed in a lower position and both ends of the quarter panels were stretched and the tops were rounded. The gas filler opening was removed in the same procedure.[1]

By the summer of 2008, the body had been primed mustard yellow. When the members of Coupe Devils first laid their eyes at the car, they disliked the color. During the 2008 Jokers Car Show the gang decided to apply black scallops on the body. A heap of masking tape, newspaper and black paint was bought and the car was scalloped. The engine was hopped up with Offenhauser heads and a triple set of Stromberg 97 carburetors. During the Power Hot Rod Reunion in 2008, a guy asked Kasper where he got hold of the ripple bumpers, he replied "Do you want them?", the guy said "hell yeah" and Kasper removed the bumpers from his car and sold them to the guy. When Kasper returned home he installed the stock bumpers, but inverted them up-side-down. The spring of 2009, Kasper was working on getting the car further to the ground. The frame was kicked up 7 inches in the rear and the coils were cut at front. The car was barely finished before the 2009 Coupe Devils Rod & Kustom Bonanza. In matter of fact, it was finished the the day before the event. On the way to A-Bombers Old Style Weekend 2009, Kasper was experiencing technical problems with his Ford, the car would only run at idle speed. Turned out the gas tank was full of crap and it was replaced by a boat gas tank, the car was up and running the same day and made the event.[1]

The body was painted copper bronze in February 2010, and the three carburetor setup was removed in favor of one carburetor due three units poured to much gas to the 8BA Flathead engine. In the struggle to achieve higher speeds at the highway, the stock rear axle was swapped in favor of a Malibu unit during the winter as well. At the Ekeberg market in the autumn of 2009, he found and bought a set of 1953 Cadillac Sombreros. The finished painted car debuted at the Coupe Devils Rod & Kustom Bonanza in May 2010. Kasper experienced even more technical trouble on his way to the Hammers Back to the 50's Weekend in the summer of 2010, first a tire blew near the border, next the generator stopped loading power. A new Bosch generator was applied and upon the arrival, the generator bracket broke. Luckily a polish truck driver helped him put the generator in positing with the help from a 2x2 piece and some jacking straps. By the A-Bombers Old Style Weekend event in 2010, Kasper had upholstered the interior in white tuck & roll. The seats featured black piping.[1]

Please get in touch with us at mail@kustomrama.com if you have additional information or photos to share about Kasper Kaarbø's 1949 Ford.