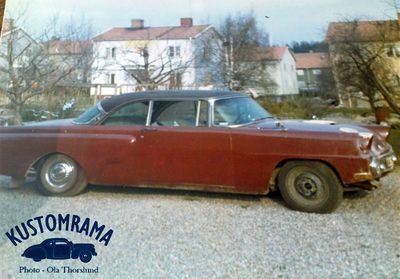 Ola's Merc was originally customized in the 1960s. This is how it appeared around 1967 - 1968. Ola got this photo from a previous owner. Photo courtesy of Ola Thorslund. 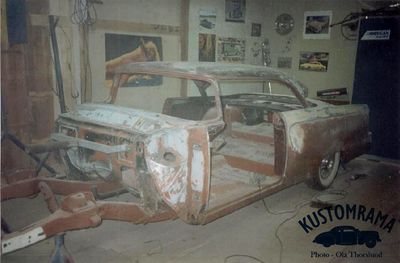 The Merc as it sat when Ola bought it in 1991. This photo was taken inside the barn in Lidinö, Stockholm where Ola rented a space. Photo courtesy of Ola Thorslund. 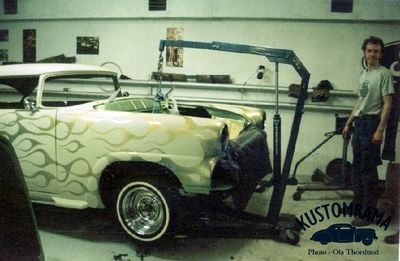 In this photo the engine is being installed. Ola and his dad Olle painted the flames themselves, before the car was sent off to the painter for the lime green metallic overlay. Photo courtesy of Ola Thorslund. 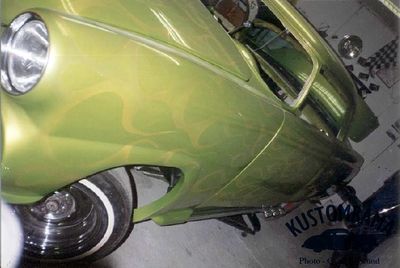 The Merc as it appeared when it returned from the paint shop in 1996. Photo courtesy of Ola Thorslund. 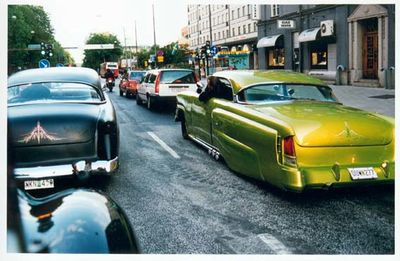 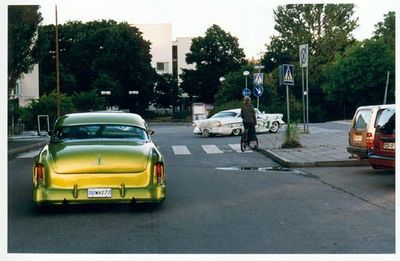 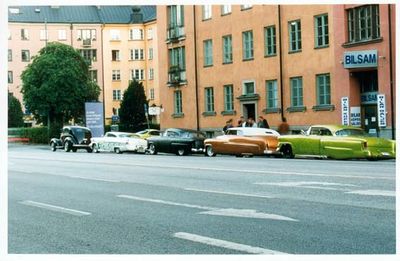 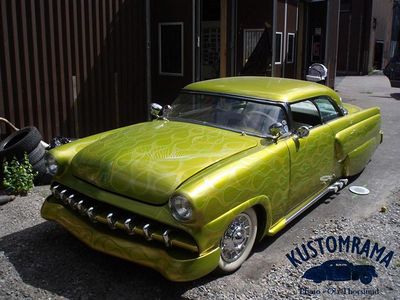 A photo of the Merc outside Ola's Garage, right before Ola sold it. Photo courtesy of Ola Thorslund. 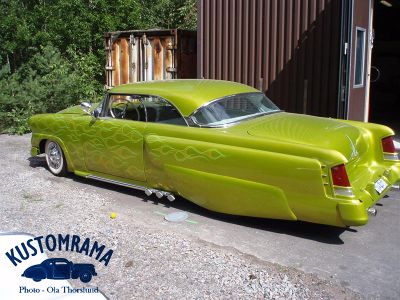 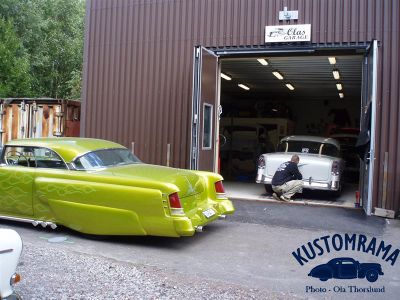 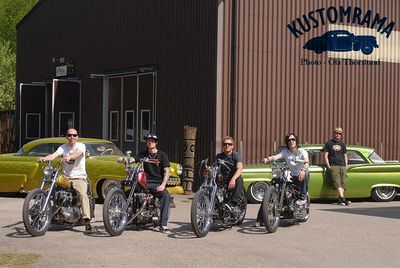 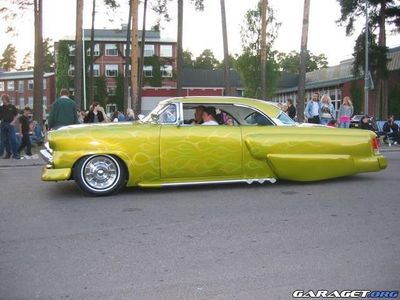 1955 Mercury Monterey restyled by Ola Thorslund from Sweden. Ola bought the Merc from Håkan Andersson in Västerås in 1991. It was a beaten old junker at the time, and he paid 11.000 SEK for it. Ola was 16 years old when he bought it, and he hired a garage space for the project in an old barn in Lidinö, Stockholm. Ola's Merc was sold new in Sweden. It ran in Stockholm from 1956 until the 1960s. It was originally customized in the 1960s, and Ola has been told that a guy in Huddinge, known as "Skägget", owned it for a while. Skägget owned a junkyard in Huddinge that was filled with old cars. Ola has also seen a photo of the car from the late 1970s, at the time it was parked outside a barn near Bälsta.[2]

Ola did everything on the car himself, except for final paint and upholstery. It was a very rough car, and it needed a lot of rust repair before Ola could start to restyle it. Up front, it was fit with 1956 Ford front fenders and 1954 Mercury headlight rims. The grille teeth were pirated from a 1955 DeSoto and mounted on a homemade grille bar. The top was chopped about 3 inches, and the rear glass was dropped down under the rear panel. The rear fenders were extended around 10 inches and modified to accept a pair of 1956 Chrysler taillights. A pair of 1949 - 1951 mercury bubble skirts were modified to fit the extended quarter panels. For a lower look up front, the wheel well lips were dropped down a bit. The front and rear bumpers came from a 1956 Chevrolet. During the build, Ola was involved in starting a club called Kustom Kemps of Sweden. They had their own magazine called Lead News, that Ola sent a copy off to Gene Winfield. In 1994, when Gene was invited to attend a show in Stockholm he got in touch with Ola, and stopped by the barn to check out the progress on his custom. Gene and Ola stayed in touch, and in 1996 Gene returned to the barn to check out the progress. Gene really admired how the young kid was customizing a 1955 Mercury. The car came without an engine and transmission, so Ola installed a Ford 400 motor and a C6 transmission in the car. Ola and his dad, Olle, gave the car a flame paint job, before it was sent to Bengans Billack for the lime green metallic paint. The bumpers were painted the same color as the car. Dual dummy spots, molded lakes pipes and 1957 Cadillac hubcaps were installed to dress it up. A pair of air shocks were installed in the rear so Ola could raise and lower the height of the car. Bilskräddarna in Sollentuna upholstered the interior over a 1970 Cadillac front seat and a Chrysler Valiant rear seat. After 7 years, the build was completed in 1998. Named "Lady Lime", Ola drove the Merc all over Europe, and he visited Hamburg, Norway and Finland with it.[2]

A while after the build was completed, a man called Ola and asked if he owned a Merc with the following license plate number. Ola confirmed, and the man answered eagerly that he had owned the car around 1967 - 1969. At the time it went as a raggar bil, and it was already restyled when he bought it. The man sent Ola two old photos of the car from back then. When Ola got the photos, he noticed that the Merc had a vinyl top back then, so he believes it had to be a Canada built car.[2]

Please get in touch with us at mail@kustomrama.com if you have additional information or photos to share about Ola Thorslund's 1955 Mercury.