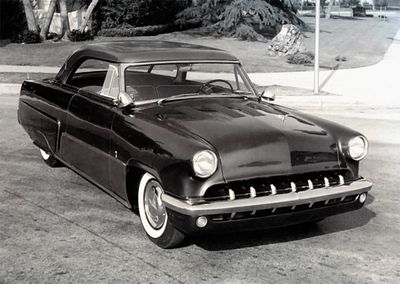 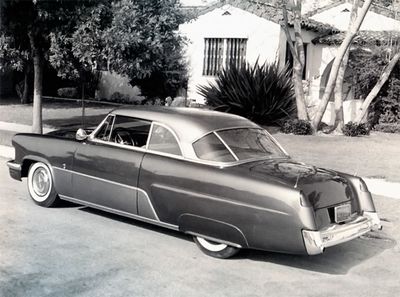 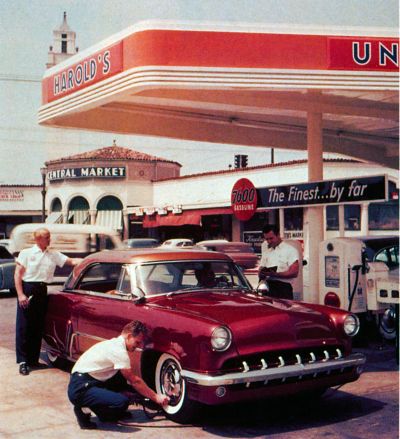 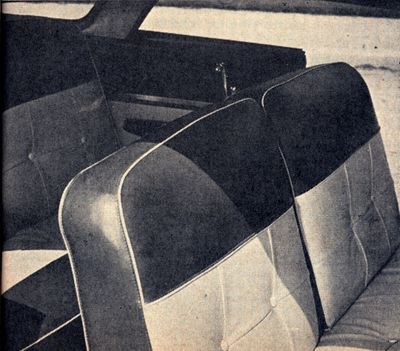 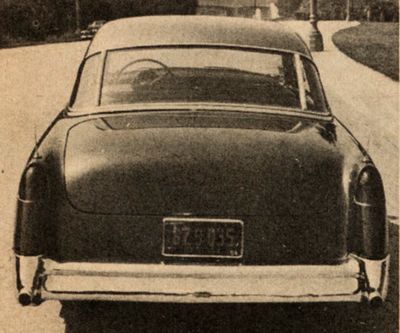 1952 Mercury Monterey restyled by Barris Kustoms for Nobby Miyakawa. The car took three and a half months and $1300 to complete. Of that amount, $800 was for shop labor. Up front the hood was shaved, capped and louvered. The stock chrome bead at the top of the grille opening was replaced with a 1/2 inch round rod. The center bar was cleaned and seven 1952 Lincoln grille teeth added to the top and bottom. The lower bumper was filled, painted and molded into the body. Headlights were frenched using the stock inner ring and outer rim. The rear deck had all exterior trim removed. The rear bumper bolts were filled and the factory trim badges were removed. The stock tail pipes were repositioned and routed through the rear bumper. The stock taillights were removed and new taillight housings were built from fenders' stock bulkhead. Frenched 1951 Frazer taillights were placed in the new housings. At each side, small fake airscoops were grafted onto the rear fenders. A light mesh chrome screen was fixed over the opening by small chrome screws. The stock side trim was also swapped for trim from an Oldsmobile.[1]

In order to get the right ride height the car was lowered 4 inches in both front and rear. 1954 Chrysler hubcaps were used on the car.[1]

Inside, the car featured conservative upholstery in brown and white antique Naugahyde that matched the two tone paint job. Stitched squares were buttoned down the seats for a decorative effect. Once the bodywork was done, the car was painted in a copper rust metallic and golden bronze metallic lacquer. 28 coats were sprayed on the car. [2]

The restyling job on Nobby's Mercury was well documented in a 8 part series how-to story in Car Craft Magazine called "Building a Custom". In the story the car was referred to as "The Japan".

Please get in touch with us at mail@kustomrama.com if you have additional information or photos to share about Nobby Miyakawa's 1952 Mercury.