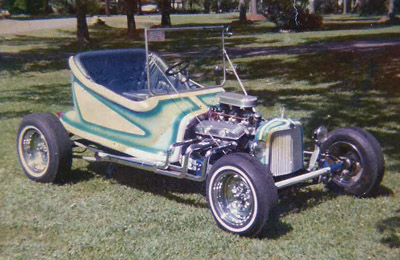 This version of Neil's Outlaw bodied roadster was completed in 1973. Photo courtesy of Neil Sidders. 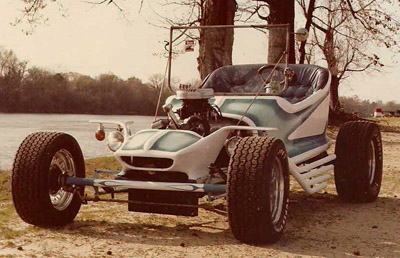 Neil's Outlaw as it looked after Neil redid it for the 1978 season.

Neil Sidders of West Monroe, Louisiana. In 1972, while attending high school, Neil bought an old race car from Herbie Munholland. The race car chassis was junk, so Neil threw that a way. The body on the other hand was one of very few Outlav fiberglass bodies that Ed Roth knocked out in the late 1950s or early 1960s. Neil built a roadster inspired by Ed Roth's Outlaw around the body, The first version of Neil's Outlaw was completed in 1972. In 1975 he bought a 1931 Ford Model A Coupe that he get running around 1978 or 1979. While Neil still owned the coupe in 2012, he sold of the roadster in 1998 in order to get money to rebuild a Biplane he was building.[1]

Please get in touch with us at mail@kustomrama.com if you have additional information or photos to share about Neil Sidders.