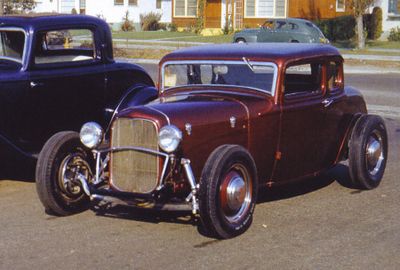 The purple version of Monte's coupe next to Lynn Yakel's 1932 Ford 5-Window Coupe. The photo was taken at Monte's house. 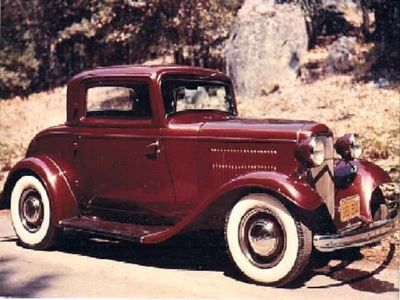 Before entering the coupe at the 1950 Hot Rod Exposition monte had the car repainted red. Photo provided by Monte Monroe. 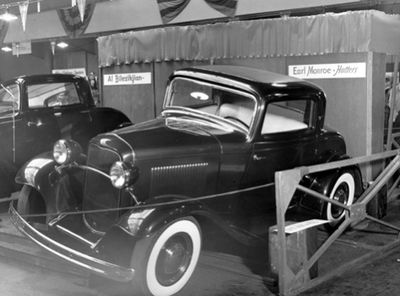 Earl's Coupe at the Hot Rod Exposition held at the National Guard Armory in Los Angeles, California in 1950.[1] 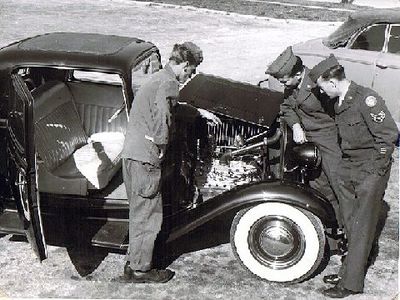 1932 Ford 3-Window Coupe owned and built by Hutters car club member Earl "Monte" Monroe of Montebello, California. After graduating from high-school in 1947, Monte got the coupe from his dad. The coupe had been his 2nd car, the car he used to drive to work, and it was in mint condition when Monte got it. Monte and Lynn Yakel were classmates at Montebello High School, they both graduated in 1947, and became best friends thru a mutual interest in hot rods. Monte's coupe was basically built in the garage of Lynn's parents, and Monte did all the usual conversions to it. Up front, the car was fit with a 3" dropped axle. The desired rake was further received by installing bigger tires in the rear. The engine was bored and stroked and hopped up by installing a Smith cam, adjustable tappets, 30 degree valves and seats, Jahns aluminum short racing pistons, aluminum flywheel, dual Potvin ignition, Evans high comp heads and a dual intake with two Stromberg 97 carburetors. The valve job and various other engine work on Monte and Lynn's coupes were done by Johnny Ryan, who had an engine building shop with Nelson Taylor in Whittier, California. Johnny and Nelson's shop was located right next door to the Miller bros. auto shop. The engine was hooked to a Lincoln continental transmission, and the old mechanical brakes were replaced by more efficient hydraulic brakes. In 1948, after all the mechanical conversions were done to the car, and Monte had removed the radiator cap and cowl lights, the coupe was painted in a gorgeous purple color. Monte had Gil Ayala of Gil's Auto Body Works mix the lacquer, and he paid $15 for a gallon. The color was the same, or nearly the same as Gil used on Joe Nitti's 1932 Ford Roadster. Inside, a custom dash with 10 instruments was installed, before an East LA shop made a cream colored Naugahyde tuck & roll upholstery for the car. The coupe was fit with 1941 Ford bumpers, and everything metal inside and out was chromed.[2]

Before entering the coupe at the 1950 Hot Rod Exposition in Los Angeles, California, Monte had it painted metallic red. In 1952, Monte opted for the USAF. He was in for four years, and sold his coupe around 1952 or 1953. The coupe was sold to Tampa, Florida, where a wealthy local attorney bought it for his kid. Monte never saw the coupe again after he sold it. After selling the coupe, Monte bought a 1949 Cadillac 2 door fastback.[2]

Please get in touch with us at mail@kustomrama.com if you have additional information or photos to share about Monte Monroe's 1932 Ford.