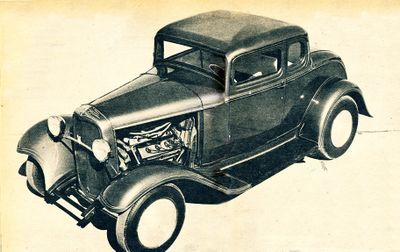 As it appeared in Rod & Custom September 1958. Photo by Katayanagi. 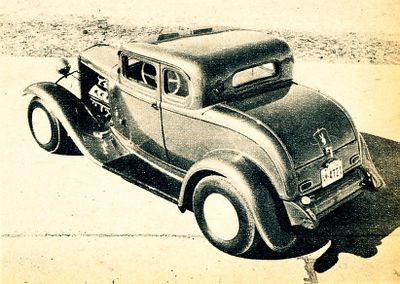 1932 Ford 5 Window Coupe owned and built by Mike Brown of Dallas, Texas. Mike was able to trade his way up to a 32 Ford coupe with a Channeled 1933 Ford Coupe, followed by a Cadillac-powered Hudson coupe. He invested $1300 in the car, earned by working as a grocery clerk in the weekends and after school. The top was chopped 4", which turned out to be the hardest task, finding a good bodyman to do it for him. He installed a 259 cui 1953 Dodge mill, hopped up with Jahns pistons, Iskenderian equipment, Weiand intake sporting 4 Stromberg 97's. The heads were stock, but the ports were polished to improve flow. The exhaust was made by Carl Stone of Dallas. Mike's coupe was built to run in C/gas class.[1]

Please get in touch with us at mail@kustomrama.com if you have additional information or photos to share about Mike Brown's 1932 Ford.