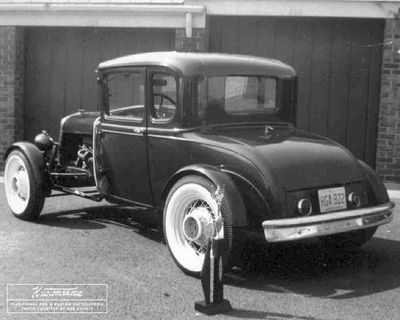 The coupe as it appeared in 1962, when Bob Kovaly bought it from Mike Brodski. Photo courtesy of Bob Kovaly. 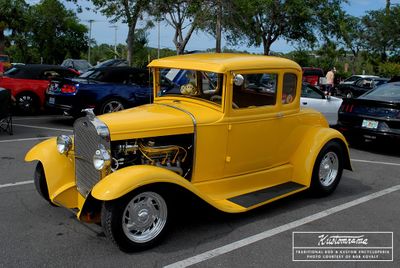 1931 Ford Coupe owned and built by Mike Brodski of Clifton, New Jersey. Brodski hot-rodded the coupe by channeling the body over the frame. He also replaced the stock fenders with motorcycle-type fenders and installed a 401 Nailhead Buick V8 with a Buick Export cam and dual quads. Painted a deep forest Green, the car ran a LaSalle transmission, an Oldsmobile rear end, a shortened rear bumper, and 1949 Pontiac taillights.[1]

In 1962 Brodski sold the coupe to Bob Kovaly. It was Kovaly's first hot rod, and he drove it in high school. Watching the older guy's on his street in Clifton doing up their own cars, Bob has been interested in hot rods and customs since he was 12 years old. "I used to hang around Andy Kassa's gas station as a kid and watch him building and working on his coupe," Bob told Sondre Kvipt of Kustomrama in 2019. Mike was friendly with Mike's two younger brothers, Lenny, and Richie, and he remembers the car being built over time. "I believe it was started in 1957 or 1958."

The Crusaders of Clifton

Bob did some street racing with the car, and he did quite well with it. He was a member of the Crusaders of Clifton for many years until the club broke up during the Vietnam war. Some of the guys didn't make it back again, and the club never reformed.[1]

After owning the coupe for approximately 4 years, Kovaly sold it to Gary Becker, who was a motorcycle cop in Clifton. "I know he had it for several years before he sold it," Kovaly told Kustomrama. Kovaly believes Becker finished the car and had it in a few shows. Kovaly is currently trying to trace his old hot rod, so please get in touch with Kustomrama at mail@kustomrama.com if you recognize the car and know where it might be today.[1]

Please get in touch with us at mail@kustomrama.com if you have additional information or photos to share about Mike Brodski's 1931 Ford.