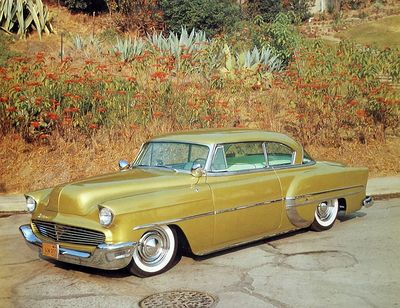 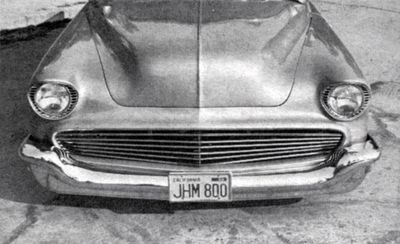 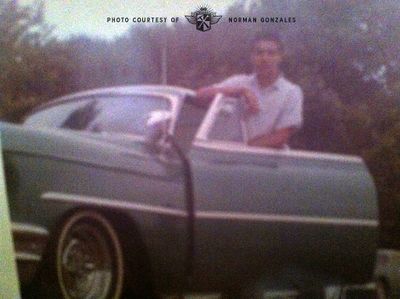 The Jade Green version of the car as it appeared in 1961. Photo courtesy of Norm Gonzales. 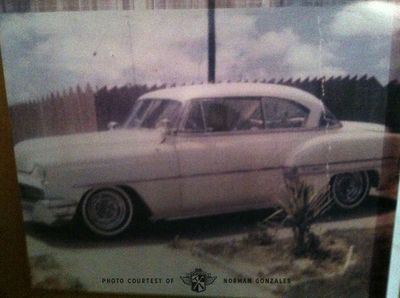 The Pearl White version of the Chevrolet as it appeared in 1963. Photo courtesy of Norm Gonzales. 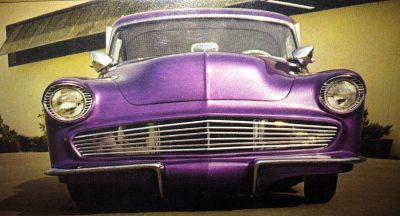 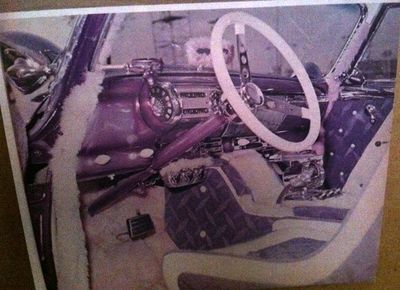 The interior of the purple version of the car. 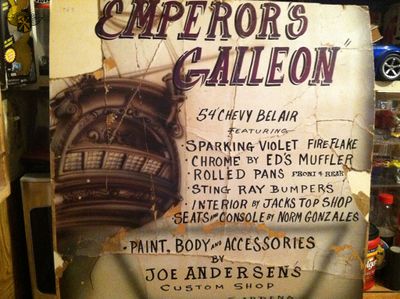 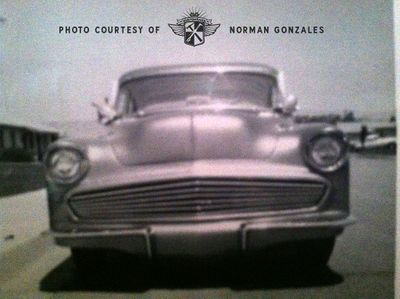 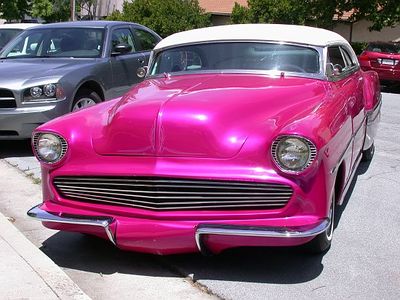 The Golden Galleon as it appeared in 2009. 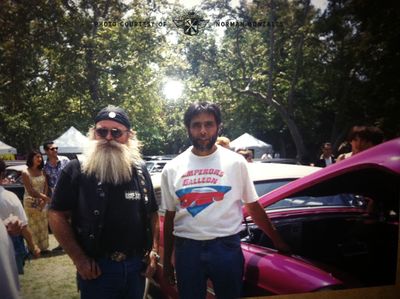 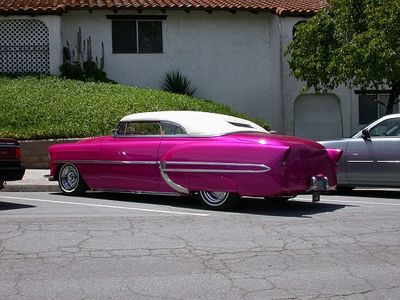 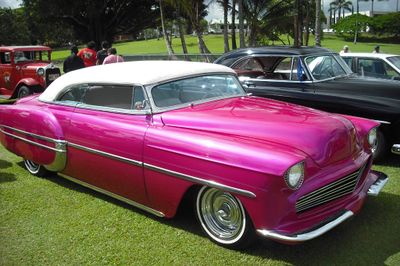 Norm brought the Chevrolet over from Lompoc to Hawaii for the 2009 Cruise Paradise.[2] 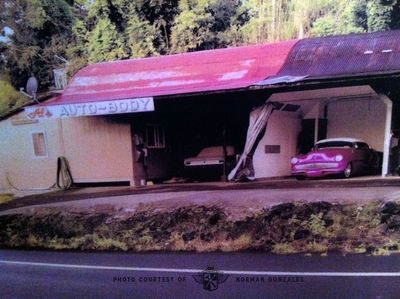 Another photo of Norm's Chevrolet on Hawaii. Photo courtesy of Norm Gonzales. 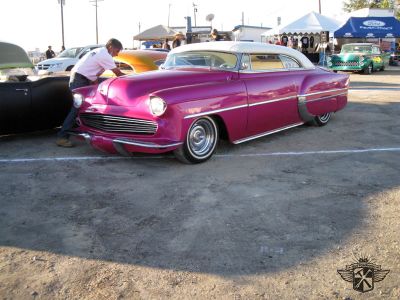 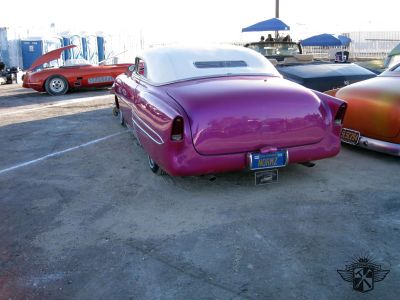 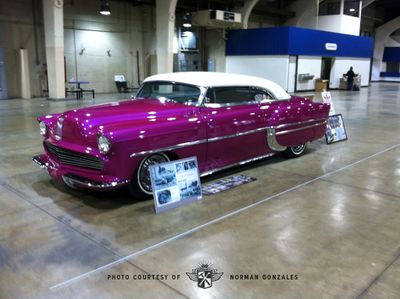 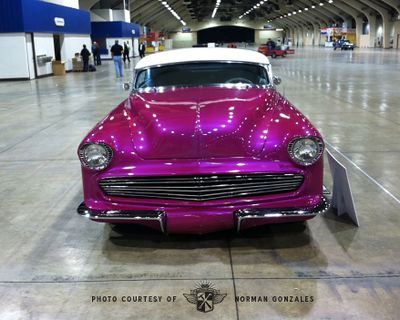 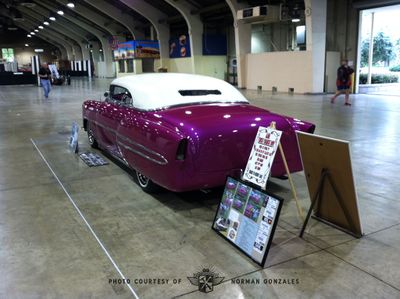 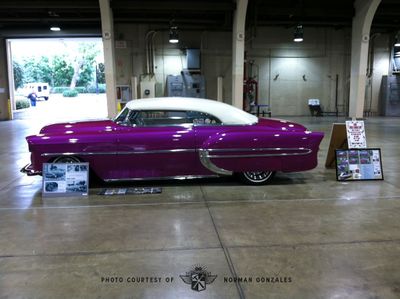 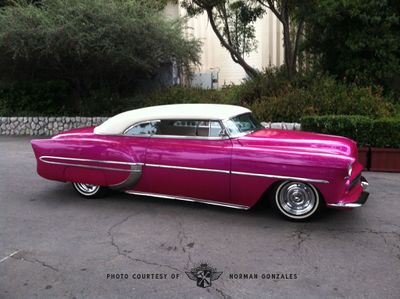 1954 Chevrolet Bel-Air restyled by Kam's Auto Body of Gardena, California for Mick Tully of Torrance, California. Mick's Chevrolet was also known as "The Golden Galleon". The rear fenders of the car were extended 3 inches and modified to fit frenched 1956 Buick taillights with 1955 DeSoto back-up units inserted. The stock rear bumper was replaced by a newer 1955 Chevrolet bumper. The doors and deck lid were shaved and push button operated. The hood corners were rounded and shaved of ornamentation. A new grille opening was formed from 3/4 inch tubings. The same tubing was also used to create a hand made grille. The headlight rings were made from scratch and frenched. A 1957 Chevrolet bumper was V'd,sectioned and modified to fit the front end of the car. Once the bodywork was done, the Golden Galleon was painted Lime Gold. Tony's Top Shop of Gardena, California upholstered the car in two-tone rolled and pleated Naugahyde. Mick's Chevy was powered by a 1955 Chevrolet engine bored .050 over, giving it a displacement of 290 cubic inches. It sported a Corvette cam and a three carburetor manifold. The engine was hooked to a 1949 Oldsmobile transmission. Many parts in the engine compartment were chromed, making it a show worthy engine![3]

By 1961 the car had received a Jade Green paint job. Two years later, in 1963, the car received a pearl white paint job. After that it was taken to Joe Andersen of Joe Andersen's Custom Shop for further modifications. The front and rear bumpers were replaced by rolled pans, and a split Corvette Sting Ray bumper was installed up front. This version, known as Emperor's Galleon, featured paint, body and accessories by Joe Andersen's Custom Shop, and Joe gave the car a sparkling violet fireflake paint job. Chrome on this version was by Ed's Muffler. The interior was by Jack's Top Shop, and the seats and console was by Norm Gonzales.

In 2009 the Golden Galleon was still around. At the time, it had received a pink paint job, and it was owned by Norm Gonzales of Lompoc, California. Norm had owned the car for almost 50 years at the time. [4] The pink version of the car featured a padded top.

Please get in touch with us at mail@kustomrama.com if you have additional information or photos to share about Mick Tully's 1954 Chevrolet.