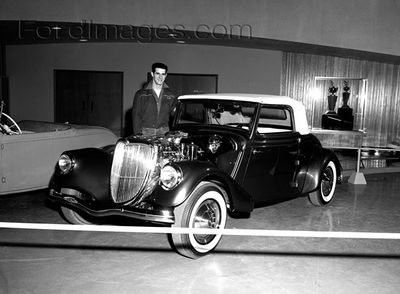 A photo of Marty with The Burgundy version of the Ford at the 1955 Rotunda Custom Car Show. Photo courtesy of FordImages.com. 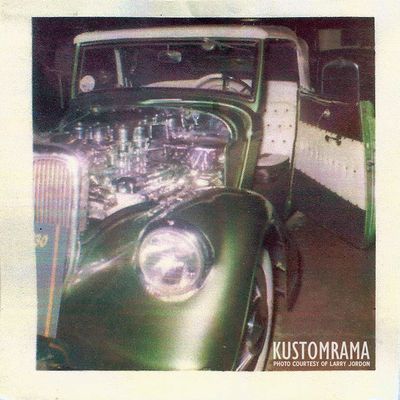 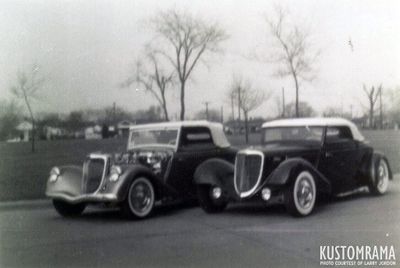 A photo of the Golden Nugget and the Goldbrick from Marty's own photo album. The original rolled and pleated interior from Marty's Ford ended up in Ernie Szelesi's 1934 Ford convertible when Marty installed the diamond tuck interior. Ernie was a good friend of Marty, and his 34 was restyled after Marty's 34. Bill Hines restyled the "Goldbrick" as well. Photo courtesy of Larry Jordon. 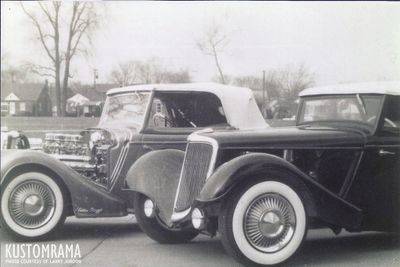 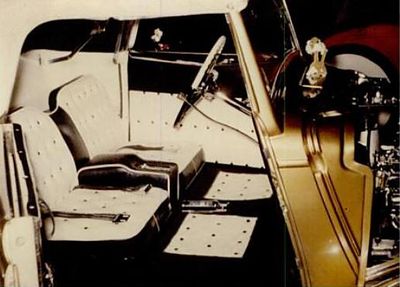 The Golden Nugget with the diamond tuck interior 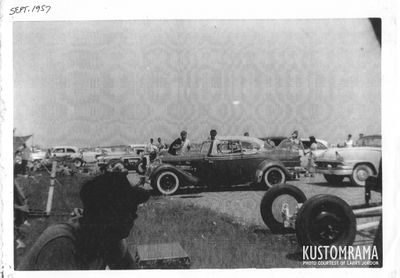 A photo of the Golden Nugget that Larry Jordon took at a drag race in September of 1957. Little did he know that he would become the owner of the car 47 years later. Photo courtesy of Larry Jordon. 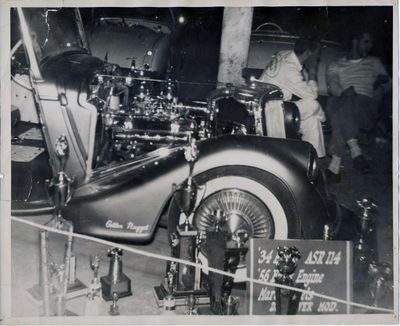 The Golden Nugget at the 1958 Detroit Autorama. Photo from The HAMB. 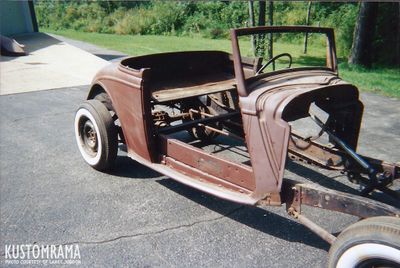 The Golden Nugget as it sat when Larry Jordon bought it from Ray Lovasz in 2004. Photo courtesy of Larry Jordon. 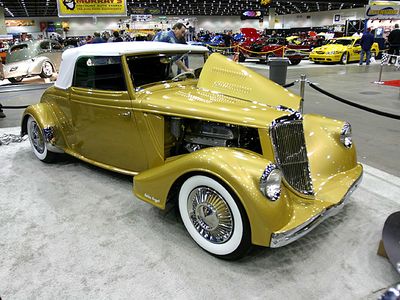 The restored version of the Golden Nugget making it's debut at the 2005 Detroit Autorama. The restoration was completed 3 days prior to the show. 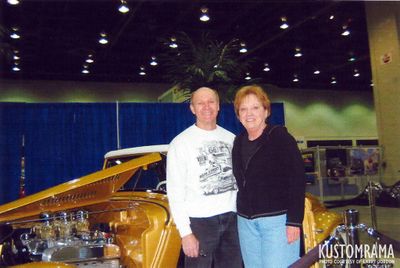 Larry and Sandy Jordon with the Golden Nugget at the 2005 Detroit Autorama. Sandy helped Larry complete the restoration in time for the show. Photo courtesy of Larry Jordon. 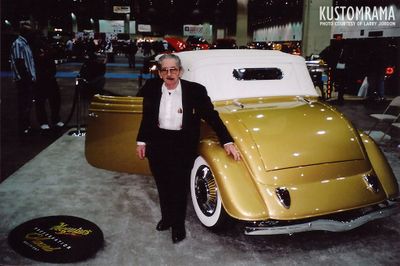 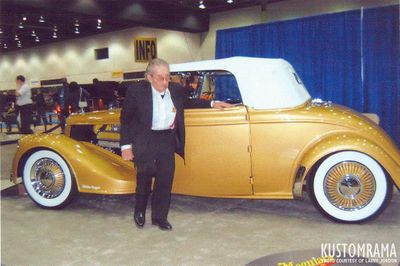 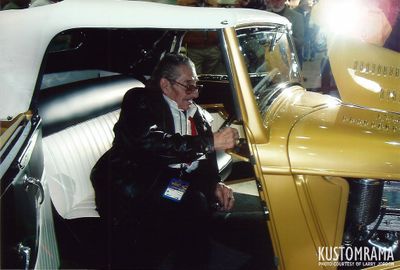 Bill signing the glovebox in the car. Photo courtesy of Larry Jordon. 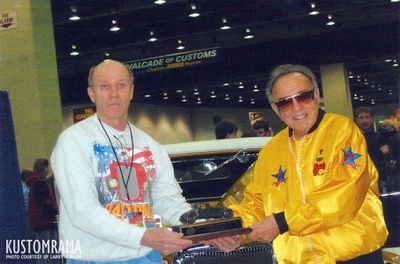 Larry with George Barris at the 2005 Detroit Autorama. Photo courtesy of Larry Jordon. 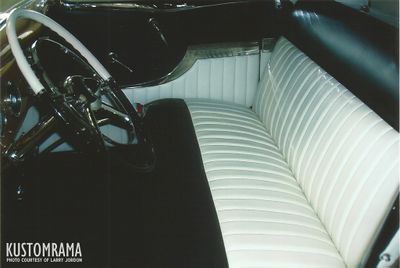 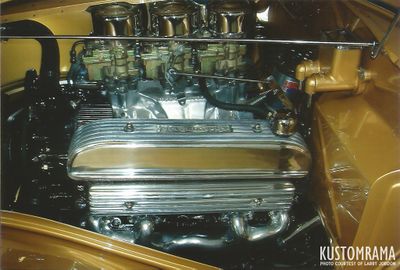 1934 Ford cabriolet built by Bill Hines for Downriver Modified President Marty Ribits of Detroit, Michigan. Marty, who was a butcher by trade, bought the car late in 1952. By then it had been pretty beaten up. Marty wanted his Ford to have the best of both worlds, so he hired Bill Hines to turn the rust bucket into a custom hot rod. Bill Hines channeled the body of the car 6 inches over the frame. To match the modification, he also had to section the grille a matching 6 inches. Custom rocker panels were created to cover the channeling. The rear tail panel under the trunk lid was sectioned 3 1/2 inches, and the rear fenders were raised the same amount. In the rear, the car was modified with 1950 Hudson taillights. Power came from a 286 cubic inch Mercury Flathead with three deuces. Once completed the car was painted a rich burgundy. Inside it featured a black and white rolled and pleated interior by Walt "Curly" Pasternak. Once completed, Marty won the “Best Custom” award at the 1953 Detroit Autorama with the car.[1]

Over the years, Marty's Ford went through several changes. During the winter of 1954 and 1955 Bill Hines fit the car with 1955 Chevrolet headlights that he turned upside down. This version was shown at the 1955 Rotunda Custom Car Show.

Not long after the car had received 1955 Chevrolet headlights, the front end was restyled again, and the front fenders were extended down behind the bumper. Hines formed a smooth custom pan that blended with the fenders and extended out to the bumper. This version of the car appeared in Car Craft August 1955.

Circa 1956 the Mercury Flathead was replaced with a brand new 322 Buick Nailhead V8. Around the same time, the car got a new black and white diamond tuck custom interior and a new green paint job. This version of the car was nicknamed the "Sweet Pea". A photo from Marty's photo album shows the Sweet Pea version of the car at an indoor car show wearing new custom made Lincoln hubcaps.

Sweet Pea was a short lived iteration of Marty's car. Nobody liked it, and it didn't take long before the car ended up in Bill Hines garage again, where it received a Gold paint job. The gold version of the car was named the "Golden Nugget". Larry Jordon photographed the Golden Nugget version of Marty's 34 attending a drag race in September of 1957.

In 1958 The Golden Nugget version of Marty's 34 won the first place trophy for Altered Street Roadster at the 1958 Detroit Autorama.[1]

Sometime in the late 1960s, the Golden Nugget ended up in a field, as Marty got involved in other projects. He kept the grille and other parts in storage in his garage. He eventually began restoring the car, but he got terminally ill, and willed the Golden Nugget to his nephew Ray Lovasz.[1]

Ray kept the car for 3 years, but after realizing that he never would restore the car back to its former glory, he sold the car to Larry Jordon in 2004. As a kid, Larry subscribed to Hot Rod Magazine. In 1955, when he was 15 years old, Larry saw the car at a drag race, and he became a fan of it. After getting the car he decided to restored the car back to its Golden Nugget version in his shop Larry Jordon Enterprise. He was invited to show the car at the 50th anniversary of the Detroit Autorama, but he wasn't able to complete the restoration in time. In 2005 Bill Hines was the featured builder of the Detroit Autorama. Once again Larry was invited ti show the car. He worked day and night, and was able to complete the restoration 3 days before the show. When Larry restored the car, he replaced the diamond tuck interior with a copy of the original rolled and pleated interior. Bill Hines told him at the show that he never liked the diamond tuck interior, and that he was glad he went for the rolled and pleated version.[2]

The Golden Nugget is currently up for sale. If you are interested in the car, please get in touch with Kustomrama at mail@kustomrama.com.

Please get in touch with us at mail@kustomrama.com if you have additional information or photos to share about Marty Ribits' 1934 Ford.