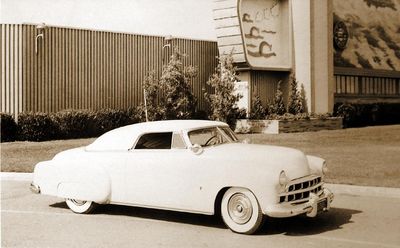 Marcia's Chevrolet at the Compton Drive-In. Photo by George Barris 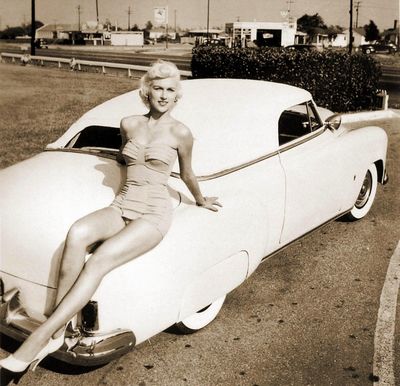 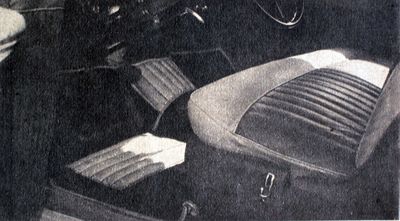 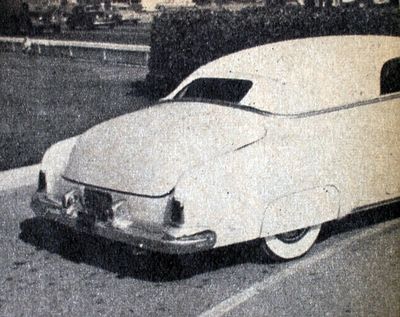 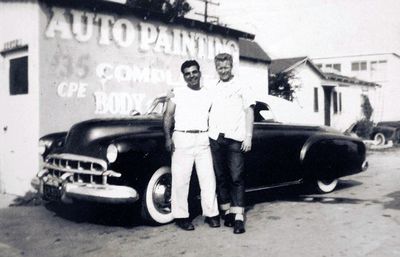 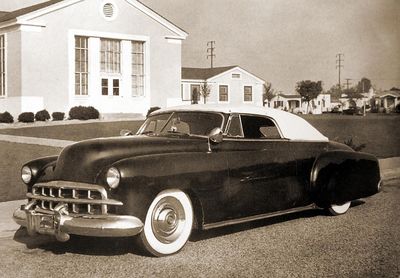 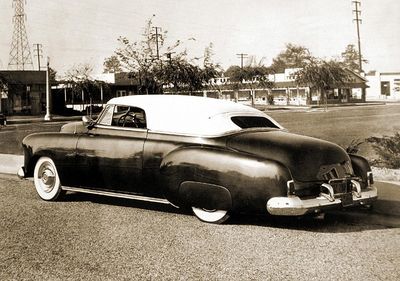 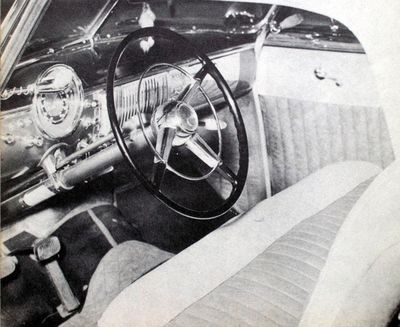 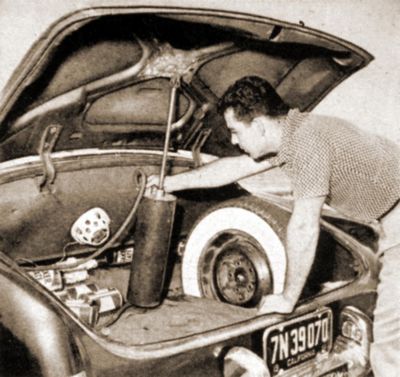 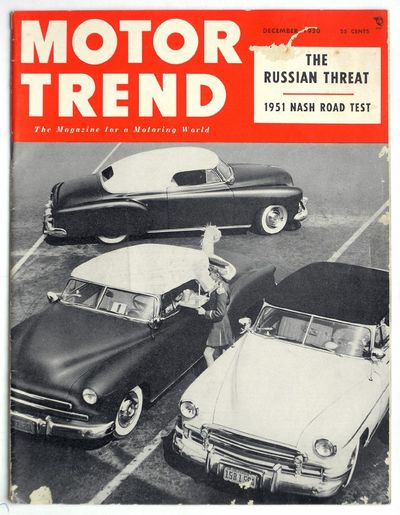 Carl's Chevrolet on the cover of Motor Trend December 1950. 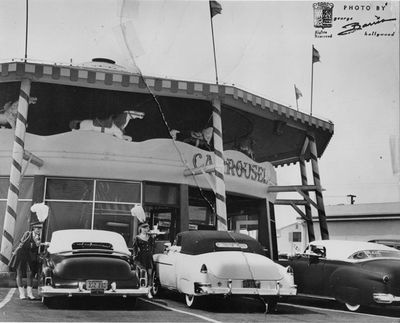 1949 Chevrolet Convertible restyled by Barris Kustoms for Marcia Campbell of Los Angeles, California. The convertible was Marcia's second car[2], and she purchased supposedly the first 1949 Chevrolet Convertible ever to be delivered to the state of California. Having a passion for custom cars, she drove her brand new car straight to Barris Kustoms for a full custom treatment. At the Barris shop, the Windshield was chopped 3 inches. The two hood halves were welded together, and the hood and deck lid were shaved for ornamentation.[3] While George Barris was working on one side of the hood welding the two halves together the other side kept popping up, so George hammered hard on the hood in frustration. The hammer then bounced off and cracked the windshield. Marcia was in tears, and George went out and bought a new hood and windshield the next day.[2] The car was further fit with a 1949 Cadillac grille. In order to fit the car, the grille had to be split, cut and shaped to the hood.[4] The end sections of the grille were handmade. The headlights were frenched and the rims were flushed.[3] The front bumper was taken from a 1949 Buick[4] and the front gravel pans were rolled, grafted to fit to the new grille and molded to the fenders. The body was dechromed for most trim, but the chrome above the belt line and on the rockers were kept. The doors were shaved and operated by electrical pushbuttons hidden under the front rocker panel. The shaved deck lid was operated by a vacuum cylinder that was connected to the intake manifold line. As both George and Marcia felt that the rear fenders didn't match the shape of the trunk, the rear fenders were power-hammered out, extended 4 inches and built up 10 inches. The rear fenders were molded to the rear quarter panels and fit with 1950 Chrysler taillights. The gas filler cap was removed and placed inside the trunk. The rear bumper was replaced by a 1949 Oldsmobile bumper.[3] To give the car the right stance the body was channeled 10 inches over the frame.[4] In addition to this, it was also lowered 3 inches in the front and 5 inches in the back. Gaylord's Kustom Shop made a padded top for the chopped convertible. Marcia wanted a smooth flowing top with elegantly shaped B-pillars. The interior was also upholstered by Gaylord. Seats and door-panels were covered with turquoise blue pleats and white horseshoe rolls made from Naugahyde. The stock steering wheel was replaced by a 1950 Pontiac unit, and the dashboard was painted in a two-tone regal blue metallic and blue mist with special fitted chromed instrument knobs. The car was painted in a pasteral blue color, and dual spotlights wrapped up the style.[3]

Later on the same year Marcia enrolled in to Compton College, and the customized Chevy was her daily transportation back and forth from school. In 1950, Marcia traded her one-year old custom for Carl Abajian's 1942 Ford Coupe, an unfinished project. Carl Abajian had Barris Kustoms re-paint the car in a deep Royal Blue. This version of the car appeared on the cover of Motor Trend December 1950. By then the car had been fit with 1947 - 1952 Cadillac Sombreros as well. Carl owned the car for about a year, before he sold it in 1951.[2] In 1953 the Chevrolet was featured in Hop Up & Motor Life Magazine September 1953‎. By then it was owned by Bill Chuck.

According to the story, Bill had made periodically minor changes to the car, in order to keep it up to date with the latest trends. He had installed a high torque truck engine with special made Belond headers and dual exhaust for better performance and power. Photos of Marcia's pastoral blue version was featured in the story, two years after Carl had Barris Kustoms re-paint it dark blue.[3]

Please get in touch with us at mail@kustomrama.com if you have additional information or photos to share about Marcia Campbell's 1949 Chevrolet.