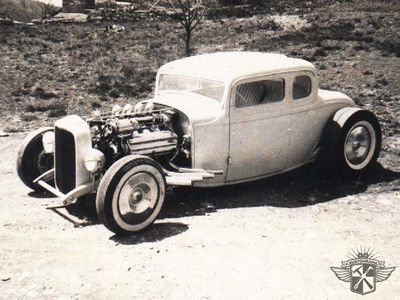 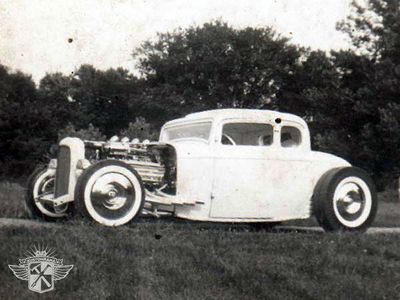 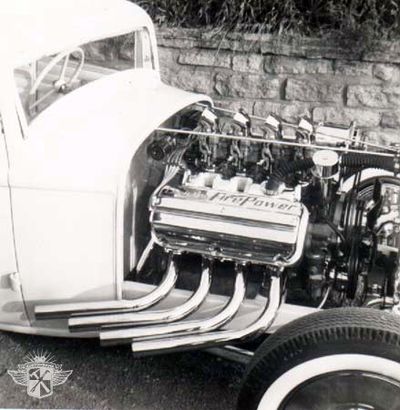 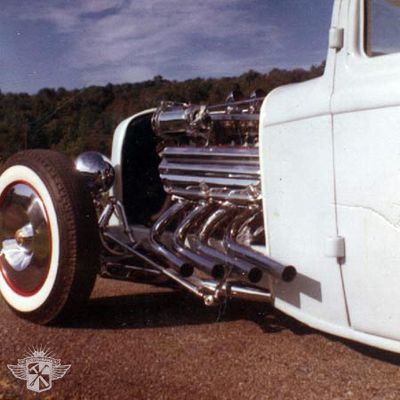 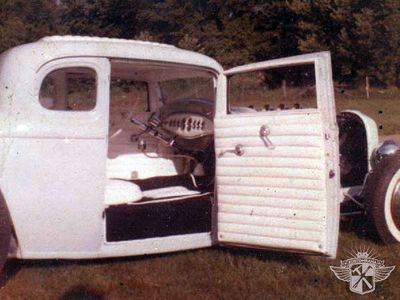 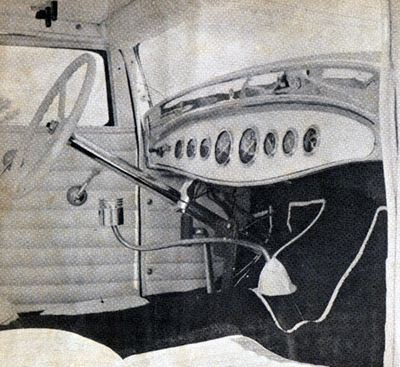 Lou's 1932 Ford and 1956 Chevrolet displayed together at an indoor car show. 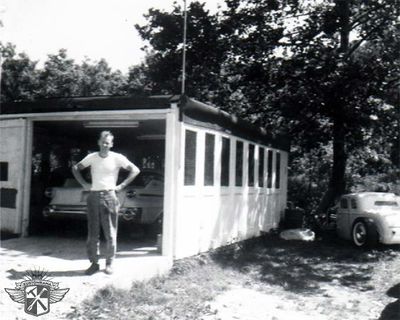 Lou in front of his shop. The coupe can be seen in the background. Photo provided by Lou Schafer - Lou Schafer & Sons[1]

1932 Ford 5-Window Coupe owned and restyled by Lou Schafer of Lou Schafer & Sons in New Richmond, Ohio. The overall height of Lou's deuce coupe was radically reduced by chopping the top 5 inches and channeling the body an additional 7 inches over the frame. The body was completely dechromed and fit with a rolled pan in the rear. All extra holes in the frame were filled, and the frame was stepped to lower the car another 5 inches in the rear. Up front it was lowered the same amount by installing a 1929 Ford crossmember, reversing the spring eyes and using 15 inch wheels. The front leaf-spring was stock 1932 Ford, while a 1940 Ford spring was installed in the rear. The grille and grille shell were sectioned 3 inches to accommodate the new height. The headlights were Arrows, and the taillights were from a 1950 Pontiac. The interior, trunk, roof inset and fender-wells were fully upholstered in white rolled and pleated Naugahyde by Bob Durant of Cincinnati, Ohio. The cockpit did also feature a chromed steering-cloumn and a chromed deuce dash with eight Stewart-Warner gauges. The gearshift-knob was a chromed piston. Lou ran the coupe without hood and fenders, and power came from a fully chromed 331-inch 1953 Chrysler mill. The engine was fit with a Cragar manifold with four Holley carbs. The bulky mill had to be moved back to clear the front crossmember. Stopping power was provided by juicy 1940 Ford brakes. The coupe rolled on 15-inch 1948 Mercury wheels up front, and 15-inch 1951 Mercury wheels in the rear. The hubcaps were 1953 Cadillac.[2]

Lou used to show his coupe with a matching painted 1956 Chevrolet. When the duo were featured in Rodding & Re-styling they had won a total of 33 show trophies to date. The Ford had won 8 trophies and the Chev had won 25 trophies.[2]

Please get in touch with us at mail@kustomrama.com if you have additional information or photos to share about Lou Schafer's 1932 Ford.